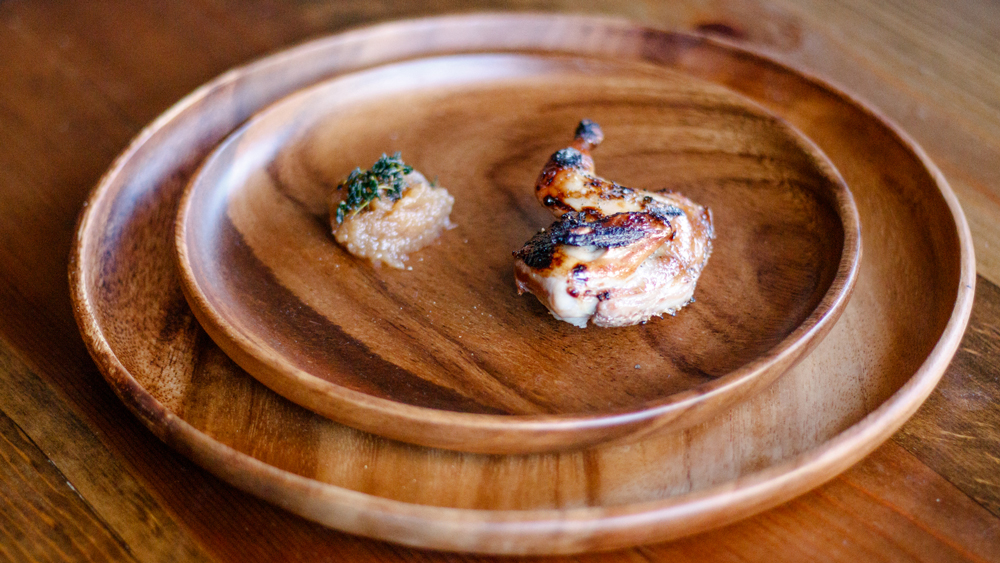 For much of Brian Dunsmoor’s career, he’s cooked Southern food, and cooked it well. At the helm of Los Angeles’ Hatchet Hall, it hasn’t been much different, serving hearty and delicious fare on the city’s Westside. But he admits that recently boredom had started to set in. He wanted to broaden not only his approach to food, but the restaurant’s as well. He didn’t want to cook just food from the South, but American food. So he started telling people that’s what they made, until one day someone asked Dunsmoor, “What is American food?” And it dawned on him, “Oh, we don’t really know. Why doesn’t anyone really know what American food is?”

Dunsmoor and his team at Hatchet Hall started on a journey to explore that question. They decided to investigate the time before industrialization and mass production created the Americana cuisine of hamburgers and hot dogs. What were the foodways that defined the regions of the U.S.? He’s turned that newfound knowledge into an intimate, tasting-menu-driven experience called Fuss & Feathers that allows diners to delve into America’s past with him.

It’s not the easiest task to tackle. The defining characteristics of the country’s cuisine are not readily apparent. When thinking of Thai, Italian, French, or Japanese food, dishes and techniques start to flash in your brain, not so with America. “We don’t have that same sense of place,” Thomas Keller tells me. “You know America was about immigrants, so depending on what part of the country you’re in, you see remnants of those immigrants. America is really about a melting pot cuisine. We can embrace different cultures and find inspiration. We’re not constrained by anything.” Dunsmoor felt the same way. He started considering how European settlement, African forced migration, Native American food culture, and indigenous ingredients could start to coalesce around a style.

He had a lot of freedom to explore, but Dunsmoor decided he needed some constraints in order to start wrapping his head around creating a coherent menu. He chose to disregard modern technology and cook the Fuss & Feathers menu on the restaurant’s wood-burning hearth instead. “I’ve locked up a lot of tools,” he says. “Maybe I’ll let them pull out the food processor for staff meal.” He also committed himself to using American ingredients, relying on what’s grown Stateside to better replicate what Americans faced before global supply chains brought them most anything they wanted year-round. “Someone told me, ‘You know what would make this spoonbread better? Parmesan cheese,'” Dunsmoor says. “I said, ‘Nope. Not at all. We’re committed to doing it a certain way.'”

After setting some boundaries on techniques and ingredients, Dunsmoor hit the books. He read histories of different eras from early colonial days to up WWII, seeking inspiration from tomes like American Food to discover what ingredients and techniques past generations relied upon. Early settlers learning about eel from Native Americans, Benjamin Franklin’s love of turkey, colonists hunting quail, New Englanders’ clam bakes, the combination of Native Americans’ corn porridge and Europeans’ soufflé to create spoon bread, and more all lead directly to dishes on the menu.

His journey also exposed him to a dark side of the country’s culinary roots. “We owe our cuisine to a lot of different cultures that Europeans did wrong,” Dunsmoor says. Southern food wouldn’t be what it is without the slave trade, and Native Americans greatly helped early settlers acclimate to the new land, before the colonists turned on them. You can’t understand this food without the appropriation and oppression that accompanied its creation. Dunsmoor to his credit doesn’t shy away from telling those stories as the meal unfolds, presenting dishes to diners while explaining true origins. Like when he serves the spot prawn served in the style of a clam bake, he notes that Algonquins buried shellfish with seaweed covered hot rocks in a way that New Englanders still copy to this day.

Fuss & Feathers menu will not remain static. It began earlier this year with a summer-focused menu for a limited run. It came back this month and happens each Thursday until November 15. There will be a more winter-focused run early next year. The $150-per-person menu is available to just 12 diners each week, but Dunsmoor hopes he can make it available to more. This dinner series is serving as a test run for what could be a tasting-menu-only restaurant that keeps exploring these themes and helps Americans get a better grasp on defining their country’s cuisine.