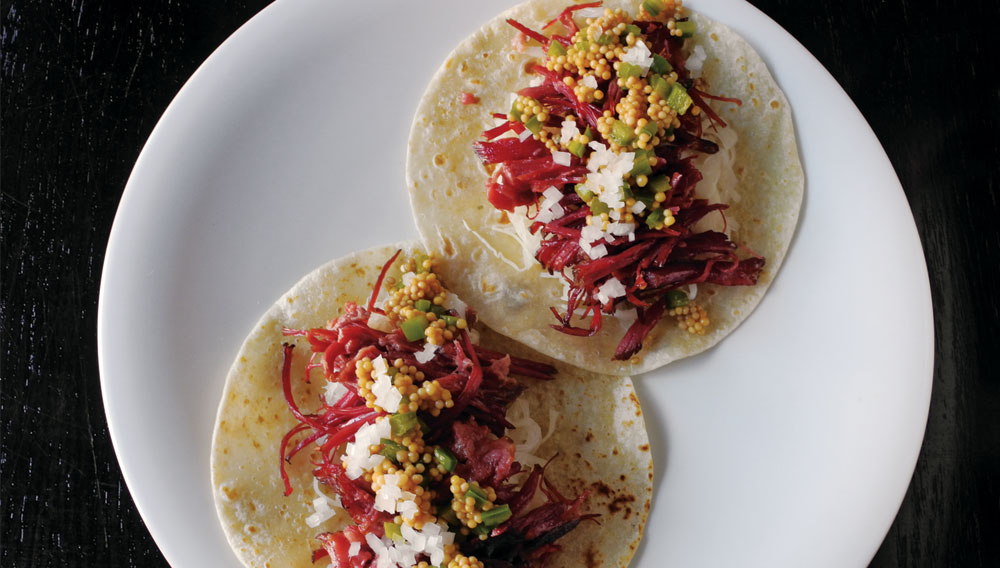 Inventive variations on the deli classic are stacking up coast to coast.

The most tempting dish at Bâtard, one of Manhattan’s most exciting new restaurants, sounds like something on the menu at a surrealist’s deli. Chef Marcus Glocker cooks octopus sous vide with 15 spices—including smoked paprika, three kinds of pepper, garlic, and mustard seeds—then packs the tender tentacles into a terrine, slices it, and serves it garnished with grainy mustard and rye bread. He calls the dish octopus pastrami, and Glocker counts among the growing number of high-end chefs determined to elevate the traditional deli sandwich to the heights of gastronomy.

Not surprisingly, the trend is particularly strong on pastrami’s home turf, New York City. At the Michelin three-star Eleven Madison Park, Daniel Humm makes pastrami to pair with a slice of fresh, soft rye, roasted peppers, and pickled mustard seeds; the meat is presented in a chafing dish so diners can assemble their own sandwiches. Alex Stupak of Empellón Taqueria fills one of his inventive tacos with short-rib pastrami and a mustard-seed salsa, and Daniel Boulud serves bone marrow topped with pastrami, pickled mustard seeds, and rye-bread toasts at DBGB. At the Gander, Jesse Schenker first transformed lamb into pastrami before moving on to squab for his fall menu. He cures the bird in a brine seasoned with fennel, coriander, peppercorn, garlic, thyme, and much more. He then pan sears the fowl, rolls it in black-truffle salt, and serves it with pickled savoy cabbage and foie gras brioche. “When I think of pastrami, just the traditional sandwich from Katz’s Deli, it is just a very satisfying food,” he says. “It’s all about the spices and the curing, and the level of salt and acid. You get that back-of-the-palate, lingering umami sensation.”

Though Glocker, too, is an aficionado of the pastrami from the famed Katz’s Delicatessen, he says his octopus pastrami, which puts an American twist on a French technique, was inspired also by a foie gras pastrami at Thomas Keller’s Per Se. “It was fascinating,” Glocker recalls. “It tasted like pastrami but was really creamy.”

Beyond New York, duck pastrami is enjoying a revival at Donald Link’s Cochon Butcher in New Orleans, where the sliced cured-and-spiced poultry is served in sliders. At Maude in Beverly Hills, Calif., Curtis Stone has featured duck pastrami alongside savory granola, smoked beet and rhubarb sauce, dehydrated fennel, and creamed leeks as part of a duck-three-ways presentation. Stone links chefs’ fascination with the dish to a larger vogue for charcuterie, pickling, and curing. “I’ve been mucking around with all kinds of preserving and curing techniques ever since my days as a young chef in Marco Pierre White’s restaurants,” he says.

One of the most dramatic reinventions of pastrami comes from Jon Bignelli of Alder in New York City, who transformed the traditional combo by creating rye pasta topped with shaved pastrami. Made with the pungent bread flour, the noodles are tossed with the spicy meat to marry a bit of Italy with a lot of the Lower East Side. This combination may sound strange, but then so did octopus pastrami—once upon a time.