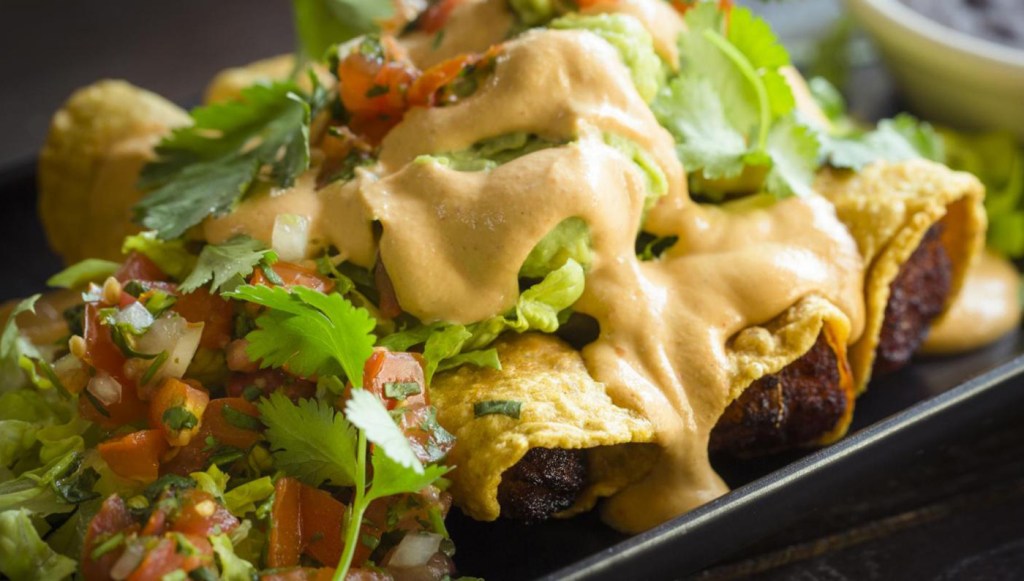 The vegan renaissance is now. Vegan cuisine—which doesn’t incorporate any animal products, such as butter or eggs—is no longer the milquetoast cuisine of choice for your most devout PETA friends, served with a side of proselytization and self-righteousness. Although only 3 percent of Americans declare themselves vegan, plant-based food is becoming the cuisine of choice—or at least a regular option—for non-vegans who want a meal that will leave them feeling like they’ve made healthy choices… both for themselves and for the environment. To that end, vegan restaurants—some of them quite gourmet—are cropping up around the country, many helmed by extremely well-regarded chefs.

One of NYC’s hottest restaurateurs, Ravi DeRossi, plans to open five vegan restaurants in the next year. “We opened our first four months ago, and every month we’re turning thousands of people away,” says DeRossi, talking about Avant Garden, his white-hot vegan spot. DeRossi has also turned his tiki bar Mother of Pearl entirely vegan, and next plans to make his 14 other venues as animal-free as possible, then dot the city with other vegan concepts.

Why vegan? Why now? Perhaps it’s because the research is mounting on America’s extreme carnivorism, and it’s looking like we went too far with our burgering. Investigative reports-slash-horror stories have exposed the realities of factory-farmed meat—cramped and sick animals pumped full of antibiotics and hormones. The health ramifications of eating that meat have been cried pretty widely by authors like Michael Pollan and Mark Bittman—serious students of food who both advocate for a largely plant-based diet: Bittman with the VB6 diet (vegetarian before 6pm) and Pollan with his famous advice, “Eat food. Not too much. Mostly plants.” Not to mention: Fifteen percent of greenhouse gases come from the meat industry, according to the U.N.

A report came out last year claiming that one of America’s most-loved meats—bacon—might be carcinogenic. Oh dear god. At this point, even unapologetic carnivores who haven’t been living under a pile of In-N-Out wrappers for the last decade must admit: A diet of three meat-based meals a day probably isn’t good for anyone.

Vegan food is also getting a big celebrity push—just look at Jay Z and Beyonce’s much ballyhooed 22-day vegan challenge. Some celebrities with enough influence to help shift Americans’ dietary habits, eat plants exclusively: Paul McCartney, Natalie Portman, Bill Clinton. Grammy winner Jason Mraz is one of the investors in Café Gratitude, a mostly-vegan mini-chain of restaurants that’s the rage among the Hollywood yoga-pants set (they’re not considered fully vegan only because they use honey in some drinks).

Until very recently, serious chefs didn’t do veggies. They braised duck and venison. They put fancy spins on burgers. Without demand in the market, there was little impetus to seriously tackle plant-based cuisine. Before top chefs got on board, the talent in many vegan restaurants was suspect, at best. And diners could taste it on the plate.

“Some people think cooking vegan is easy—here, here’s your salad,” says Landau. “But that’s not cooking. That’s why a lot of vegan food was so uninspiring. Everything at Vedge goes through six or seven processes before it hits the plate. There are a lot more talented chefs cooking vegetarian or vegan now. But we still need more.”

Like at NYC’s Dirt Candy, for instance, where chef-owner Amanda Cohen previously earned a Michelin star (the restaurant is vegetarian, but all dishes can be made vegan). Or take Landau, whose restaurant is often cited as the best vegan restaurant in America. “I’m a carnivore at heart,” says Landau. “I walk past a backyard barbecue and I start to salivate. So I try to cook vegan food that I would like if I were a carnivore. I use techniques like roasting, smoking, rubs, pastrami spices. Those aren’t meat techniques. Those are cooking techniques.”

Finally, gone are the days when going to a vegan restaurant felt like stepping into a recruitment center for the occult. Top interior designers are designing. Famous architects are architecting. The bars in these places are stacked with great cocktails; DeRossi, after all, made his name with some of NYC’s top craft cocktail bars, such as Death + Company and Mayahuel. The new breed of vegan restaurants looks, for lack of a better word, “normal.”

“We don’t preach; we’re not here to save the world,” says DeRossi. “We just want to create a great space and make vegetables taste rad.”

Ultimately, the rise of vegan restaurants is good for everyone, including carnivores. After all, three meals of meat a day is a decent way to get acquainted with a defibrillator. At the very least, the vegan movement will make the dishes surrounding the main protein more delicious. Here’s a selection of the best spots to try.

Since Café Gratitude’s only non-vegan item is honey, we’re giving them a pass. They currently have four Southern California locations; all with bright, miminalist dining spaces…and within weeks will be opening Gratitude, an upscale sister restaurant with a full beverage and cocktail program: You’ll be able to get a dirty martini with your Calabria antipasto nut-based cheese plate.

Full disclosure: Phillip Franklin, the chef of The Gadarene Swine, Phillip Frankland Lee, competed on Guy’s Grocery Games, the Food Network show of which I’m a judge. And he blew everyone away. His restaurants are equally impressive: Swine just went entirely vegan and added a wine garden. Try the blackened cauliflower with red onions cooked in lime juice, pistachios, Thai basil, and cauliflower stem “chips.”

The brand-new Little Pine is an organic vegan bistro owned by DJ and musician Moby, the profits from which go to animal-welfare organizations. “I don’t eat non-organic and non-vegan food at home, so I don’t know why I’d serve anything other than organic and vegan food in my restaurant,” he says. Dishes include cassoulet with baked seitan, and tomato agnolotti.

Avant Garden, the first vegan restaurant from nightlife impresario Ravi DeRossi (Death + Company, etc.), but not the last. Try the butternut faro risotto with baked apple and sage pesto, or the carrot-harissa toast.

By Chloe’s chef-owner Chloe Coscarelli has been vegan for a decade; her months-old spot in Greenwich Village is already being hailed for its veggie burger, widely regarded as the city’s best.

Chef Rich Landau has been cooking vegetarian for decades, and it shows at Vedge, his modern showroom for vegan cuisine. Signature dishes include a terrine of roasted yellow beets with avocado, smoked tofu, capers, red onion, and creamy cucumbers, served with rye toast points.

Chef Aaron Woo—a butcher’s son, who interned at Napa’s famed vegetarian restaurant, Ubuntu—creates both vegan and vegetarian options for his menus at Natural Selection. Don’t miss his knockout gnocchi that rotates with the seasons.

When demand for his pop-up vegan dinner series got out of control, Kory Stetina partnered with one of the city’s top cocktail minds and designers to create Kindred, a sort of death-metal vegan restaurant. Chef Jeremy Scullin (who worked briefly at Vedge) makes a killer jackfruit barbecue sandwich.

Chef-owner Makini Howell (who was also Stevie Wonder’s tour chef) has four spots through the city, but Plum Bistro, a trailblazer in the city’s vegan scene, is her flagship.

The cashew-coated kale chips are the rave at Elizabeth’s Gone Raw, but chef Jonathan Seningen (a vet of Daniel in NYC and Hook in DC) is constantly changing up the offerings on his six-course tasting menu at this fine-dining spot.