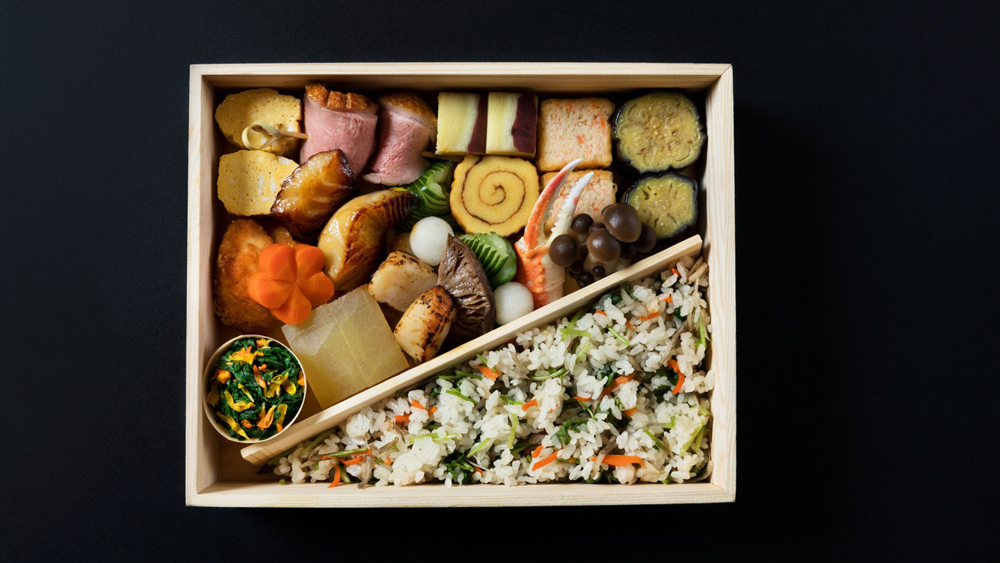 After four months closed, chef Brandon Go decided to offer his bentos at his Michelin-starred Hayato again. Before the pandemic, he sold a limited amount at lunchtime, while at night Go served a $240 kaiseki menu at his seven-seat counter in downtown LA. With dine-in service prohibited and al fresco not conducive to his style of cooking, he decided he’d lean on the bentos to resurrect his tiny, acclaimed restaurant. He started taking reservations for his $52 August boxes at 10 am on the first day of the month. They sold out in about three minutes.

The roughly 80 bentos Hayato makes each weekend showcase the techniques that cultivated his loyal fanbase. Go, for example, grills miso cod, scallops and two kinds of tamago (rolled omelet). He fries ebi shinjo (shrimp cakes) and fava beans. He steams crab tofu, chrysanthemum greens and shimeji mushrooms. He simmers vegetables, including carrots that are cut into the shape of a Japanese plum flower and infused with the flavors of umeboshi (pickled plums), and stores them in stock for one to two days. The effect is like having a sauce inside the vegetables.

The attention to detail is high, with Go hand-selecting each individual vegetable from his purveyor to ensure uniformity, and working two days ahead with a cook to prep for assembly on the weekend. Each 16- to 20-item bento takes about an hour of labor to produce.

“Really, I’d better not think about the numbers,” Go said. “It probably doesn’t make sense financially to do it, but I think the reason that we have demand is that people can see we put a ton of work into our product.” Even with his restaurant and life savings on the line, he’s not willing to cut corners. It’s why Angelenos came to love Hayato in the first place.

This type of precise cooking and precise thinking is the result of a career in Japanese food that the 42-year-old Go started when he was a teenager at Koi, his family’s Orange County restaurant. He did sushi prep when he was 15. By the time he was 16, he was standing behind the sushi counter.

After college, Go went to Japan, worked at an izakaya and realized that sushi was just a small part of Japanese food. He’s since devoted the rest of his life to learning about the other parts. Up until this year, when he had to cancel a trip with his staff, he had traveled to Japan once or twice every year.

He studied soba at a culinary school. He took sake courses. He had a cousin who worked at the Tsukiji fish market and is now at the Toyosu fish market in Tokyo. Go told his cousin he was interested in making high-end Japanese food. His cousin asked around about opportunities, and Go ended up training under Michelin-starred chefs Takeshi Kubo and Hideki Ishikawa, two mentors who have greatly influenced his cooking.

Even before Covid-19, Go saw Hayato as a long and arduous journey. He had previously envisioned a scenario where he might be alone in his restaurant, making every bento himself if it came to that. So he’s mentally prepared himself if this is something that happens. This is really the only backup plan he has. He feels fortunate that he doesn’t have to do it now.

“The most important thing is making sure our staff doesn’t disappear,” Go said. “I’ve trained some of them for years. Employees moved to LA for Hayato. Losing them would be worse than losing a lot of money. We’d be back at square one.”

A glimpse into the kaiseki Go made before the pandemic.  Photo: courtesy Dylan+Jeni

Go wasn’t worried about getting Hayato to profitability in its first couple years. He had reached a point this year where he wasn’t losing money and was about to expand dinner service to a four-person table along with the seven seats at the 900-square-foot Hayato’s counter. He felt like he was on the right path.

“This is probably where I’m going to spend the rest of my life, so investing a couple years of my life is not really a big deal to me,” Go said.

Now that Go realizes that dining restrictions in LA could extend through the year and beyond, he’s talked to other chefs, including Kato’s Jon Yao, about the necessity of figuring out a way to ride this out. One thing Go says he absolutely can’t do is abandon Hayato. He is the sole owner of the restaurant and paid for its buildout. He’s put his life savings and some money from his parents into Hayato. He has a 10-year-lease with options to extend it, which he intends to do.

“There is absolutely no plan B,” Go said. “Which, in a way, makes it easy to keep moving forward. Everything I have is invested in the restaurant. I can never walk away. So I may have to keep borrowing and go deep into debt to continue, but the only way forward to make the money back is doing it in this restaurant. If I give up and try to get a job somewhere else, there is zero chance to completely recoup the losses of building a restaurant that I had to abandon. The only way out is through.”

Doing kaiseki at his counter probably won’t make sense for a while. And Go doesn’t think serving dinner outside will work for Hayato.

“So much of our food is about subtlety and nuance, aromas,” he said. “When you open a lidded bowl of soup and you get that puff of yuzu or something like that, that’s the essence of the dish. I think too much of that is lost outdoors.”

Plus, given the high cost of serving kaiseki meals with ultra-premium ingredients like nodoguro (blackthroat seaperch), karasumi (cured fish roe), live crab and abalone, having a dinner service canceled because of weather would be financially disastrous.

Go will not serve kaiseki outside Hayato.  Photo: courtesy Dylan+Jeni

What Go wants to do, when dine-in resumes, is serve dinner to his four-person table. He’s been selling sake with his bentos, and he believes that he can sell more sake at dinner. He’s also planning to add some sort of takeout dinner in the fall.

Go has wanted to learn osechi, an elaborate and celebratory array of dishes that Japanese people eat for days to celebrate a new year. He had previously thought he would never find time to work on osechi given how busy he was at Hayato.

“I have really no excuse not to make it this year,” he said. “We were thinking if we start developing all the recipes and possibly start building some kind of dinner takeout around some osechi recipes, we could kind of work on two things at the same time. There are a lot of things that I would put in osechi that would go well with sake at home. And then we would still have the osechi developed and we could do that every year going forward.”

Creating osechi will give Go new ways to think about food. Osechi isn’t about letting customers experience instant gratification. It’s about preserving ingredients and flavors. It’s about creating nourishment and happiness that lasts for days.

The journey at Hayato, like the journey at every restaurant that is still alive in America, has taken a detour. But Go remains determined to move his restaurant forward.

“What I said to the staff is that, whatever we do, I don’t want the restaurant to take a step backward in the level of cooking and customer experience,” he said. “If we can’t do something that is on par with what we did, then I don’t want to do it.”