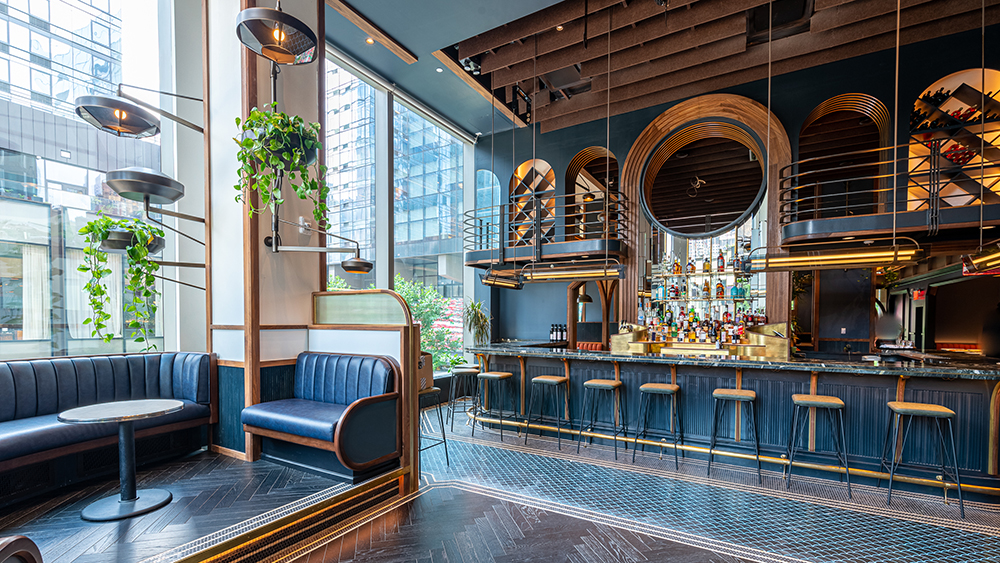 The restaurateur behind one of Brooklyn’s best pancake spots (Greenpoint’s Chez Ma Tante) is jumping boroughs and making his Manhattan debut. Josh Cohen’s Hidden Leaf, which opened Wednesday, is no breakfast joint, though. It’s a new pan-Asian restaurant within a soon-to-open performance venue near Penn Station, hoping to appeal to gastronomes and art connoisseurs alike.

With the kitchen under the direction of Chai Trivedi (previously of Buddakan, among other spots), Hidden Leaf is serving up a menu that evokes the flavors of southern China, Myanmar, Laos, Thailand and Vietnam. Those influences are then mirrored in the drinks, created by Iain Griffiths, who’s making their New York debut after stints at Dandelyan and White Lyan in London.

“We’ve worked very hard to create something at Hidden Leaf and Midnight Theatre that doesn’t exist anywhere else,” Cohen told Robb Report in an email. “It’s a sensory intersection of great food and refined cocktails with an air of mystery that’s delivered by design.”

While it might be hard to compete with the talent that will be on display, which is set to include everything from magic to music to performance art, Trivedi’s menu is putting up a pretty good fight. To start out, he’s offering small plates like Yunnan barbecue St. Louis ribs with sticky sauce, seeds and preserved ginger mustard alongside larger plates like steamed black sea bass with vadouvan curry, crispy jasmine rice and pickled Fresno chile. Shareable dim sum will also be up for grabs, with dishes such as jade vegetable dumplings and crunchy pork potstickers serving as a couple of standouts.

Alongside the food, Griffiths will be mixing up riffs on classic cocktails that pull from the Asian-inspired menu. Two current options include the Dead Ringer, a twist on a Corpse Reviver No. 2 made with baijiu and a melon aperitif, and the Tablet Negroni, which infuses the standby Italian cocktail with flavors from the Southeast Asian Tablet milk candy.

Hidden Leaf and Midnight Café, the restaurant’s aperitivo bar, are now open Wednesday through Sunday. The Midnight Theatre will soft launch later this summer with a grand opening in the fall, making dinner and a show easier than ever.

Click here to see all the photos of Hidden Leaf.