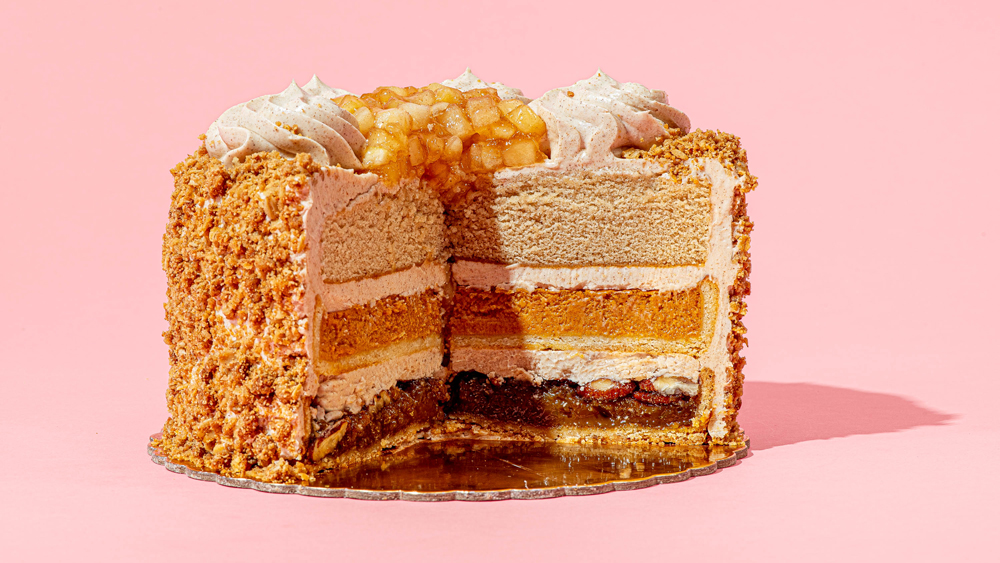 ‘Tis the season to invest in elastic waistbands. You may not go to the same big parties this year and since you’re likely not in the office you won’t be inundated with baked goods that flood break rooms across the land during the holidays, but that doesn’t mean you should deprive yourself of some high-quality sweets. We’ve already beat you to it, taste-testing some of the best desserts from the country’s best pastry chefs to create a buyer’s guide so you can treat yourself, friends and family to some treats. Here are our favorite bakeries shipping their confections nationwide.

While the food world goes crazy over the panettone stylings of Roy Shvartzapel’s outstanding Italian sweet bread, there’s another baker plugging along making her outstanding version year after year too. Avery Ruzicka, co-owner of Manresa Bread, has once again brought back her delicious, airy panettone with the perfectly tender crumb and spot-on flavors. This year’s edition that ships nationwide features triple chocolate with candied orange. Quantities are limited, but there are still three more shipping dates to choose from during the holiday season. While you’re at it, you might as well have her throw in duo of Breton-style kouign amann in your order as well.

A pair of Florida transplants to Los Angeles, Catarah Coleman and Shoneji Robison, opened a shop specializing in traditional Southern dessert recipes with their own twist. The duo became known for their excellent cupcakes—with flavors like sweet potato, apple caramel, peach cobbler and chicken & waffle—they’ve also succeeded on the back of their great cakes, cookies pies and pudding. Their desserts are the perfect capper to any home-cooked meal.

Sisters Emily and Melissa Elsen started backing pies in a Brooklyn apartment more than a decade ago, eventually opening a brick-and-mortar café a few neighborhoods over in the Borough of Kings. Their handmade pies with flaky crusts and satisfyingly big crimped edges became a hit. They have a wide variety of pies available in their Gowanus café, but also ship a handful around the country, including the salted caramel apple, which has become their signature creation.

Christina Tosi, the queen of kitschy desserts, needs no introduction—but we’ll offer one anyway. Starting off inside Momofuku, she has spun off the wildly successful Milk Bar, offering her creative and nostalgia-tinged baked goods in six cities across North America. She also ships her tasty treats nationwide, like her famed Milk Bar Pie, a spinoff of a classic southern chess pie, that she originally created for staff meal while working at Wylie Dufresne’s iconic WD~50. She has plenty of holiday-themed treats too, like her Peppermint Bark Cake and for those who don’t want pie for Thanksgiving, there’s her layered pumpkin cake.

Yeah, everything is bigger in Texas, but appeal of this pie isn’t about size—it’s the quality. For four decades the Goode family has served up Lone Star fare in Houston from Tex-Mex to barbecue. They also make a damn fine Texas pecan pie with a crumbly crust that arrives in a handsome wood box that’s perfect for sending as a gift.

After stages at Michelin three-star restaurants The French Laundry and Per Se, Auzerais Bellamy worked for Thomas Keller again at his Bouchon Bakery, along with the executive pastry chef position at Brooklyn’s Beloved Pies ‘n’ Thighs. All the while she was working on her blondie recipe until she decided to create her own online business selling her pecan and salted caramel, Brooklyn blackout, cinnamon sugar and birthday cake blondies directly to customers. You can order them individually or in variety boxes.

It’s that classic Hollywood story where a New Yorker sets out west to make it in the pictures…and then opens a cake shop? Lisa J. Olin did that, working in movie and TV production before founding her shop Cake Monkey. She partnered with pastry chef Elizabeth Belkind, who worked under the great Nancy Silverton. They’ve played on nostalgia to make tastier versions of some Hostess classics and their pop pies, which are akin to Pop Tarts, but far superior. Olin and Belkind are selling a collection of their pies nationwide as well as their Cakewiches and samplers that make a great gift.

The pastry chef who created the Cronut, crafts outstanding kouign amann, gave us the cookie shot and generally bakes some of the most outstanding sweets around has an annual tradition we love: Christmas Morning Cereal. This is no simple box of Cheerios. Every year, Ansel sells cartons packed with puffed rice that’s covered in caramelized milk chocolate and mixed with smoked cinnamon miniature meringues and candied hazelnuts. It’s crunchy and sweet with just the right amount of spice from the cinnamon. It’s not quite on sale yet, but you can get notified on his site about when you can buy this addictive snack.

Since the 15th century, long before Italy became unified into a single state, bakers impressed guests for a celebration with a sweet bread that would sometimes even contain candied orange peel from a distant locale. That tradition has continued in Italy, with much of the country’s panettone sold during the holiday season. There are a ton of inauthentic knock-offs sold around the world, but if you want a real-dal panettone from the Boot, give Olivieri a try. Pastry chef Nicola Olivieri uses his family’s 130-year-old recipe to craft his classic sweet bread. And his company will ship it directly to the States right after baking it, so it will arrive to you fresh.

You’ve heard of Turducken, but have you tried a PieCaken? Instead of a chicken stuffed in a duck stuffed in a turkey, pastry chef Zac Young has created a Frankenstein’s monster of holiday desserts in one cinnamon buttercream-encased package. A pecan pie is topped with a pumpkin pie and then a spice cake and then a topping of apple pie filling as the coup de grâce. Now, the cake may not look huge when it arrives, but it’s so decadent that it’ll serve many more people than you think. It’s the perfect confection for those among us who simply don’t want to choose just one dessert.