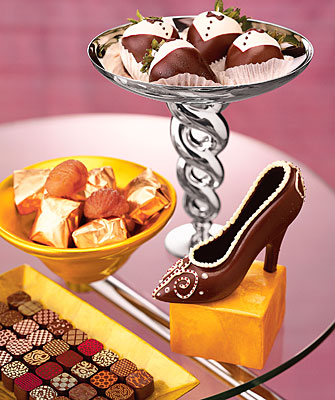 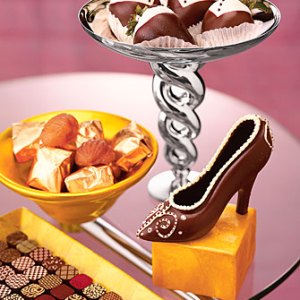 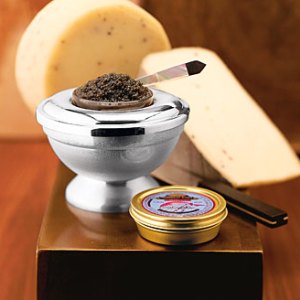 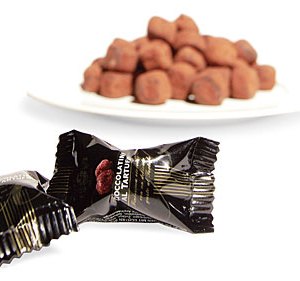 Knowing that the food served can make or break a party, a wise host chooses his menu carefully or hires a choice caterer to address the culinary concerns, while the gracious guest recognizes that a gift-wrapped delicacy always is a welcome expression of gratitude.

Because merriment involves eating as well as drinking, we present the following treats to serve at the next party that you host, to bring to the next soiree that you attend, or to send as tasty and tasteful gifts.

Virtually everyone has heard of Kobe beef, but few know that Wagyu, the breed of cattle that yields the delicious meat, is raised in the United States as well as Japan. Lobel’s, the 164-year-old Manhattan butcher shop, supplies dry-aged Wagyu steaks and roasts ($48.98 to $138.98 per pound) cut from hormone- and antibiotic-free animals that enjoy a vegetarian diet. Lobel’s of New York, 877.783.4512, www.lobels.com

Fish, it is said, should be served fresh or not served at all. One purveyor that lives by this philosophy is Browne Trading Co. of Portland, Maine, which supplies Eric Ripert of Le Bernardin and Daniel Boulud with their fruits of the sea. In fact, the company sells Boulud’s private stock caviars ($115 per ounce for beluga) and smoked Scottish Atlantic salmon ($45 for one presliced pound). Browne Trading Co., 800.944.7848, www.brownetrading.com

Tasting an unusual food for the first time is easier when it is presented alongside more familiar fare. The steak sampler from Seattle’s Finest Exotic Meats will allow your guests to expand their palates gradually; it features a pound each of Kobe beef, buffalo sirloin, elk medallions, wild boar tenderloin, and ostrich medallions. Seattle’s Finest Exotic Meats, 800.680.4375, www.exoticmeats.com

Feasting on Donner, on Blitzen, on…

Hosts adventuresome—or irreverent—enough to serve reindeer during the holidays can contact D’Angelo Bros. in Philadelphia for chops, leg steaks, and other choice cuts ($6.98 to $15.98 per pound) from animals raised in Illinois. D’Angelo Bros. Meat Market, 215.923.5637, www.dangelobros.com

If you and your friends compete to throw the most lavish event of the holiday party season, here is an entrée idea that is certain to get their goat. D’Artagnan, the Newark, N.J.–based provider of gourmet meats and other treats, offers whole kid goat carcasses by special order ($180 each). The kid goats weigh from 16 to 20 pounds. D’Artagnan, 800.327.8246, www.dartagnan.com

New York’s Ideal Cheese Shop is stocked with standards such as Emmental from Switzerland and Brie from France, but its fare ranges into the exotic. Black truffles are key ingredients in caciotta al tartufo ($19.95 per pound), a cheese from the Umbria region of Italy that is made from a blend of cow and sheep milk, and sotocenere al tartufo ($19.95 per pound), a Venetian cheese aged in ash. Also available is a truffled raw milk Gouda from Holland ($25 per pound). Ideal Cheese Shop, 800.382.0109, www.idealcheese.com

Caviar often is taken too seriously for its own good, for it can be fun as well as elegant, as this Working Class Hero package ($195) from Dean & DeLuca demonstrates. Two ounces of caviar, spreaders, a two-tiered server, a flask, and a pot of crème fraîche come tucked inside a shiny aluminum lunch pail. Dean & DeLuca, 877.826.9246, www.deandeluca.com

As a guest, it is improper to expect that the host will open and share the gift of food or wine that you bring as a thank-you. But an exception can be made if you arrive bearing 16-ounce jars of Sable & Rosenfeld’s Tipsy Onions and Tipsy Olives. The vermouth-flavored cocktail garnishes provide martini lovers—particularly those who prefer theirs desert-dry—with a unique way to savor their favorite drink. Available through Sur La Table, 866.328.5412, www.surlatable.com

The work that goes into a jar of Bar-le-Duc currant jam seems positively medieval, as it should, considering that the preparation method dates to 1344. Tiny currant berries are deseeded by hand with the assistance of a goose quill, a decidedly low-tech tool. Some 2,000 berries are needed to fill a single jar of jam, and about 10,000 jars are produced annually. Cardullo’s Gourmet Shoppe in Cambridge, Mass., imports both the red ($26.99) and white ($29.99) varieties. Available through Cardullo’s, 617.491.8888, www.cardullos.com

The best-dressed strawberries come from Shari’s Berries, a Roseville, Calif., company that elevates chocolate-dipped fruit to a formal level. Its Tuxedo Berries ($89.95 for two dozen) are coated in white and dark chocolate so that they appear to be clad in men’s evening wear. Shari’s Berries, 877.237.7437, www.berries.com

Chestnuts reach their apex in the form of marrons glacés, a traditional holiday treat in Europe. The process of candying the nuts, which often involves flavoring them with cognac, is an arduous task that can last for days. For your sanity’s sake, it is best simply to order a box from KIS Global Flavors of Canada ($27 to $30 for a box of 12). KIS Global Flavors, 866.547.7467, www.kisglobalflavors.com

Originally from the Alsace region of France, Chef Michel Bernard Platz came to the United States in 1986 and eventually formed Out of a Flower, a specialty ice-cream producer in Dallas. Among the exotic flavors offered is French lavender ($7.99 per pint), which, true to the company’s name, draws its flavor from the pale purple blossom. Available through IceCreamSource.com, 866.858.6380, www.icecreamsource.com

A century ago, one of the highest honors a female performing artist could receive was to have a dessert named after her. The actress Sarah Bernhardt was one of the few to merit this succulent form of immortality, and while several recipes for her namesake treat survive, the Chocolate Dreamer believes its diamond-shaped cookie version ($65 per box) is authentically delicious. The Chocolate Dreamer, 914.633.2904, www.thechocolatedreamer.com

A Truffle with Truffles

As tasty as chocolate truffle candies are, they have been misnamed, because none contain actual truffles. Urbani Truffles has remedied this culinary oversight with what it claims are the world’s only candies containing real black truffles. Oddly enough, Urbani calls the candies Chocolate Bon Bons with Truffles ($25 for a 7-ounce tube). Urbani Truffles USA, 215.699.8780, www.urbanitruffles.com

Richart, the Paris chocolatier, puts beribboned cardboard boxes to shame with its handsome burl wood chocolate vault ($675). It arrives filled with seven different types of gourmet chocolates and candies, including pure chocolate Ultra Fines, Pâte de Fruits confections, filled chocolates from the new Children’s Design Collection, and your choice from among the seven flavors offered in the Petits Richart line of chocolates, for a grand total of 97 pieces. Unfortunately, the vault is not equipped with a lock. Richart Paris, 888.742.4278, www.richart-chocolates.com

Leave it to Petrossian, the purveyor that introduced Paris to caviar, to concoct a plausible way to pair fish roe with chocolate. Petrossian presents a 350-gram tin of its vodka-flavored chocolate pearls alongside a 125-gram tin of the caviar of your choice ($270 for sevruga, $340 for ossetra, $395 for beluga). Petrossian, 800.828.9241, www.petrossian.com

After John and Tracy Anderson sold their Napa Valley winery two years ago, they pursued another shared longtime interest: chocolate. Their St. Helena, Calif., company, Woodhouse Chocolate, produces bars, truffles, and caramels, but the assorted chocolates ($48 for a one-pound box) best showcase the range of 30 flavors and combinations. Although they are now in the chocolate business, the Andersons have not completely abandoned their previous pursuit. One of the candies, the champagne truffle, is filled with Grande Champagne cognac and shaped like a cork. Woodhouse Chocolate, 800.966.3468, www.woodhousechocolate.com

These catering suggestions will help distinguish your next dinner party from all others this season.

Among the company’s exclusive catering locations are the New York Botanical Garden and the 130-foot yacht Abigail K. 212.696.4076, www.abigailkirsch.com

If the party takes place in the Hamptons, there is a good chance that Art of Eating is involved. The company passed muster with former caterer Martha Stewart. 631.267.2411, www.hamptonsartofeating.com

Most of the ingredients that go into the sumptuous food served by the Cleaver Company are organic and fished or farmed using environmentally friendly methods. 212.741.9174, www.cleaverco.com

Chef-caterer Gary Arabia does not serve his infamous “body sushi”—a model clad only in strategically placed banana leaves on which sushi is presented—for just anyone. 323.850.2600, www.globalcuisinecatering.com

A team from Jack’s defeated more than 200 other competitors to claim the grand champion title at the 2004 World Championship Barbecue Cooking Contest, held in Memphis, Tenn., in May. 229.268.1500

Andrea Bell, who learned bread-making skills from James Beard and other cooking techniques from the Cordon Bleu in France, has delighted Los Angeles revelers with her creative catering since 1981. 310.837.8900

Chef Dan Lenchner believes that boring food is not kosher. He avoids what he calls the “kosher catering clichés” and whips up intriguing dishes that adhere to Jewish dietary laws. 212.966.3449, www.mannacatering.com

New Delhi native Saran promotes Indian food through teaching and catering. In late August, he released a cookbook, Indian Home Cooking, and in September, he opened Dévi, a 75-seat restaurant in Manhattan. 917.859.7160, www.suvir.com