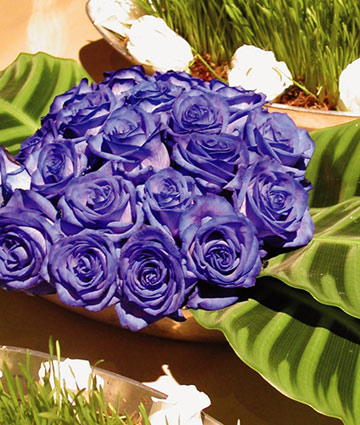 Great parties pose a paradox. A staggering amount of strategy, preparation, and perspiration goes into providing such ephemeral distractions. If you wish to mount a truly spectacular event that your guests will remember fondly forever, the preparations require a commitment on the level of a full-time job. It is fortunate, then, that an entire industry has developed to address this dilemma. By choosing suitable venues, coordinating vendors, securing permits, and handling any other headaches, party planners, or event planners as some prefer to call themselves, free you to relax and enjoy the company of your guests. 6 The following five planners have risen to the top of their highly competitive profession. The stories they tell about the most challenging—and most satisfying—events they have planned to date help illustrate why their services remain in strong demand among savvy hosts.

“The best parties are the ones where I’m allowed to match the personality of the host,” says Tutera, citing as an example an event he orchestrated last fall for clients in New York. “It was a party for no reason, which is a terrific reason to throw a party. [The clients] wanted to feel like college kids again, so I created a club outside their home. It looked like I had built a second wing onto it.” The 250 guests enjoyed vodka, caviar, and sushi, and danced the night away on the club’s sunken dance floor.

Another favorite maxim of Tutera’s is that “every 30 minutes, something different has to happen.” In this case, it meant constant change in musical acts. He hired the Village People and other notable bands and singers from the 1970s to enhance the illusion of traveling back in time, heightening the fun by surprising the guests with new performers every half hour. “They were literally swept away,” Tutera says. “Guests sent me letters thanking me for whisking them away for six hours to some place they’d left behind.”

Recently, Tutera assembled a more elaborate event for a Chicago couple and 75 of their friends. “They got married in Italy a while ago, and they wanted to celebrate just for the hell of it,” he says. “They never met me. They did this all over the phone. They wanted four days of parties in Palm Beach.” Tutera hired a private jet to fly the guests to the Florida barrier island for a long weekend that included frolicking at the Breakers, attending a masked ball at Mar-a-Lago (costumes provided), and other diversions. “They allowed me to do what I do best. Every single night, there was something different. I took people on a four-day ride.”

Offices in: Manhattan and Mamaroneck, N.Y.

Years in business: 19, but his current company was founded 17 years ago.

In Addition: His second book, America Entertains: A Year of Imaginative Parties (Stewart, Tabori, and Chang), was released this fall.

An original occasion faced a daunting test in 1991, when it organized the grand opening celebration for the Ronald W. Reagan Presidential Library in Simi Valley, Calif. The event spanned two days and hosted 4,000 guests, including then President George Bush and first lady Barbara Bush, four ex-presidents and five former first ladies, 25 heads of state, and numerous other dignitaries. “The amount of detail was overwhelming,” Merrell says. “We had to deal with the White House, the Secret Service, and the Reagan Library, all of whom had separate agendas and did not always see eye-to-eye. We redid things four or five times until everyone was satisfied.”

Since then, the company has coordinated many more events, some on very short notice. In fact, the premiere party it staged in February 2002 for the New Line Cinema film John Q earned AOO two awards from its peers in the special events industry. “We had four days to put it together, which is relatively typical for a movie premiere,” says Merrell. “It was for 400 people, and it was completely custom—the buffet, the bar, the linens, the tables.” A standout detail was the cobalt blue roses featured in the decorations. Merrell explains that the dyeing technique used on the blooms is “something available in the industry, but not many people are aware of it.”

One of the unique functions AOO arranged recently was the New Year’s Eve vow renewal ceremony for Sharon and Ozzy Osbourne, which was broadcast on the reality TV show starring the family. The after-party, which took place at the Beverly Hills Hotel, was dominated by three specially decorated spaces. One room was made to look like a bordello, another to resemble an English castle, and the third was transformed into a five-store outdoor mall.

In addition: AOO has handled more than 15 film premieres this year to date.

Anyone intimidated by the notion of coordinating a dinner party for 20 will appreciate the event that Micucci considers the most challenging of her career. In 1996, her company, Along Came Mary Productions, mounted a holiday party for 18,000 at the studios of Universal Pictures in Hollywood, California. ACM had handled Universal’s previous holiday party, a 10,000-guest affair that seemed intimate by comparison.

Micucci and her staff spent six months planning the event, ultimately dividing the nine acre backlot into 10 more manageable sections of 1,800 to 2,000 guests, each with its own staff and color scheme. The four-hour event featured 20 Santas, eight caroling quartets, eight bands, a petting zoo, fairground rides, a 40-foot Christmas tree, mimes, jugglers, a holiday crafts station, and snow machines that produced enough precipitation to allow snowball fights. “There were countless meetings to make sure the process would not break down on the day of the event,” says Micucci. Indeed, a number of ACM supervisors erected a camp on site and lived there during the two weeks prior to the big day.

Catering alone required a staff of 700 to support the 140 buffet stations and 100 bars situated throughout the grounds. “Feeding 18,000 people is no easy feat, but the food was quite wonderful,” Micucci says. Traffic flow was a concern as well. “We had two entrances to the party so there would not be a bottleneck,” she says. “We timed it. When you have 18,000 people, you have to be careful. You don’t want it to get too crowded too fast.” Once inside, guests relied on maps to find their way around the premises.

ACM’s evening did not end with the Universal party. “We also had a movie premiere party that night,” Micucci says. “I can’t remember who it was for, but we did that for 1,000 people.”

In addition: Catering is the foundation of Micucci’s reputation. The Hollywood Reporter pronounced her “the epicurean Steven Spielberg.”

If you wish to view an example of Dinwiddie’s work, pull The Player from your DVD library and fast-forward to the black-tie dinner scene. The event for 400 guests was both a genuine fund-raiser for the Los Angeles County Museum of Art (LACMA) and a part of the 1992 film’s plot. The movie’s director, Robert Altman, contacted Dinwiddie, then director of special events for LACMA, and asked to film during an event on the museum’s summer calendar. Because the schedule was light, Dinwiddie suggested creating an event. “Altman liked the idea, the museum liked it,” she says. “Even in L.A., people are never jaded about the movie business.”

Invitees were told to adhere to a black and white dress code and briefed on what to expect and how to behave. “We were up front with the ticket buyers,” Dinwiddie says. “The movie business requires takes and retakes, and that could mean a long evening. But nobody minded.” The director, wanting a natural atmosphere, placed few restrictions on movement. “As long as no one cut in front of the camera, Altman pretty much let them go about their normal routines,” she recalls. Filming did pose some inconveniences, however. Dinner was delayed until 10:30 pm, and guests who wanted to greet the celebrities had to think twice before doing so. “Because it was a scene in a movie, some stars, such as Cher, played themselves, while others, such as Tim Robbins, played a character,” says Dinwiddie. Altman, of course, required the guests to address Robbins and the other principals by their character names.

Everyone went home happy. LACMA raised more than $50,000, Altman created a hit film, and Dinwiddie, to her surprise, received a screen credit. “Most of what I do is fleeting,” she says. “Maybe there’s a few still photos, and that’s it. But this is immortalized. It was a once-in-a-lifetime opportunity.”

Years in business: Dinwiddie Events is two years old, but she has been planning events since 1976.

In addition: Dinwiddie estimates that she has created, planned, and executed more than 4,000 events.

When asked how she plans to please the 800 guests who routinely attend the official Oscar after-party every year, Cecchetto responds with a firm correction. “They’re not my guests,” she insists. “No one is my guest. They are my client’s guests. It’s up to me to find out what the client wants so I can create an extension of that vision. It’s up to me to support the event so they can host their guests.” This attitude toward her work has served Cecchetto well. The Academy of Motion Picture Arts and Sciences, the institution that awards the Oscars, has hired her Sequoia Productions to organize the Governor’s Ball year after year.

The Oscar after-party is hardly the only event on Cecchetto’s résumé. Last June, she prepared a 40th wedding anniversary party at Spago Beverly Hills that the 150 guests are still talking about. The client told her that she “did not want the party to be just about [the couple],” so Cecchetto sent invitations that asked the guests to offer three pieces of advice on how to make a marriage last. “Some were hysterical,” Cecchetto recalls, and all were compiled into a keepsake book, covered in burgundy linen.

Interspersed with the comments were additional quotes from famous folks such as William Shakespeare, Mother Teresa, and Cher. Portrait photos were taken of each guest upon arrival at the restaurant. Later, during the party, the host rose, thanked them all for sharing their marital wisdom, and said she wished to share their advice with everyone else. The guests were then presented with copies of the book, complete with the freshly taken photographs of themselves inside. “They were blown away,” says Cecchetto. “I got pulled over by so many guests, with awe in their voices. They were not just awed by the book, but by the photos inside, which were beautiful. They asked me, ‘How?’ and I replied, ‘If I tell you how, you won’t hire me.’ Only my client knows the secret.”

Years in business: Cecchetto has planned events for 18 years, but her company is 15 years old.

In addition: Next February will mark her 15th consecutive year of planning the Academy Awards Governor’s Ball.