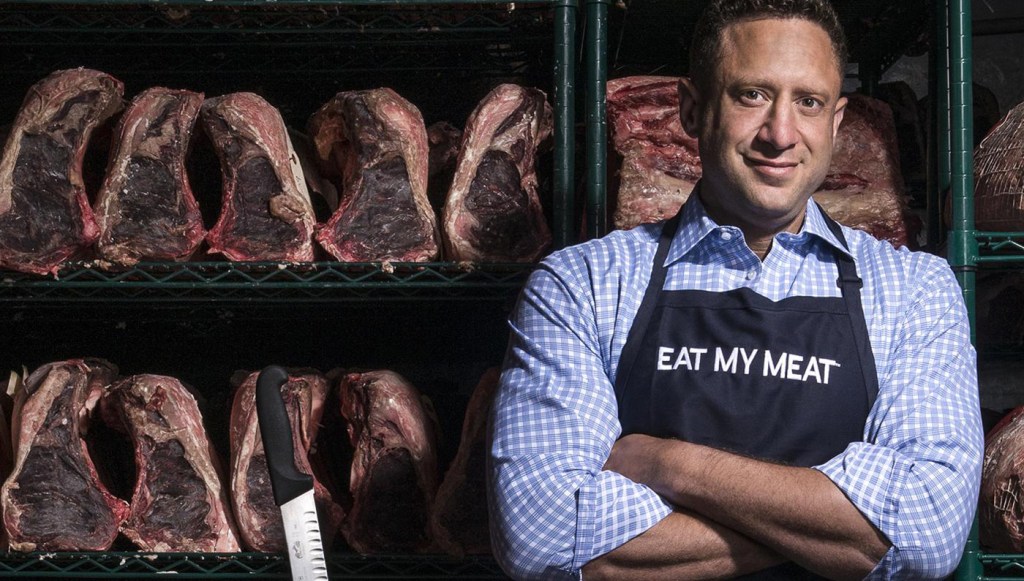 If you described the dry-aging process to most people, they’d recoil a little. “You see, instead of serving the fresh meat,” says Pat LaFrieda, “we hang it in a dark room for a month, sometimes four months, and let it decompose until it develops a thick black mold on it. Then we sell it for double the price.”

While the thought of consuming meat so described may go against our survival instincts, it’s how regular beef realizes its full, most intense potential—how something ordinary becomes extraordinary.

“That beef is completely enhanced, like taking the water out of spinach or reducing a sauce,” says LaFrieda, who’s the CEO of Pat LaFrieda Meat Purveyors and the de facto authority on dry-aging. He provides meat to most of the best restaurants in the U.S. (Eleven Madison Park, Gotham Bar & Grill, and Union Square Cafe, to name just a few), with 7,500 cuts of meat—mostly short ribs, primal cuts, and ribeyes—currently hanging in his company’s New Jersey aging room. Most chefs, he says, prefer the price-to-quality ratio of 30-day-aged meat. But Meat Purveyors offers up to 120-day-aged, during which time a cut of beef will lose 35 percent of its original weight.

“It’s a reduction of moisture and decomposition,” LaFrieda explains. “You’re peeling off water that’s coming to the eye of the muscle. Decomposition is where you get the intensified flavor.”  It doesn’t rot, LaFrieda explains, because he keeps it in a controlled atmosphere, with high air circulation at about 80 percent humidity.

That decomposition means that the collagen and proteins in the meat break down during the aging process, resulting in a simultaneously firm yet tender steak. “If you held a fresh steak by its edge, it would droop down,” explains LaFrieda. “But one that comes out of the dry-age room, you can hold it out like a stick of butter. So when your teeth bite through it, it doesn’t resist.”

And just like reducing a sauce, the evaporation of water intensifies that “beefy” flavor. It develops a muskier, funkier taste; some have compared it to cave-aging blue cheese. The fat also oxidizes, creating an intoxicating umami flavor that fresh beef simply doesn’t have. The end result? The beefiest beef that beef can get. To use wine as a metaphor, if a regular steak is rosé dry-aged beef is a chewy, complex Cabernet.

As for his personal taste, La Frieda says 45 to 55-day-aged is his everyday ideal. “If it’s a Saturday night and I want to treat myself, then I’d do the 120-day-aged,” he says. “It just has a lot more flavor, like a big red wine. I’ve also had 120-day-aged sliced thin into carpaccio.”

Trial and error is how he and his team discovered 120 days to be the outer limits of dry-aging. “We tried doing five months,” he says, “But there’s just diminishing returns. The flavor starts to get negative and you don’t have that sweetness.”

Anything he wouldn’t age?

“Domestic lamb,” he says. “Some people are aging it and it’s twice the price. But the reason you buy American lamb is because it’s sweet and subtle and not gamey. Why would you put that in an aging room and make it funky?”