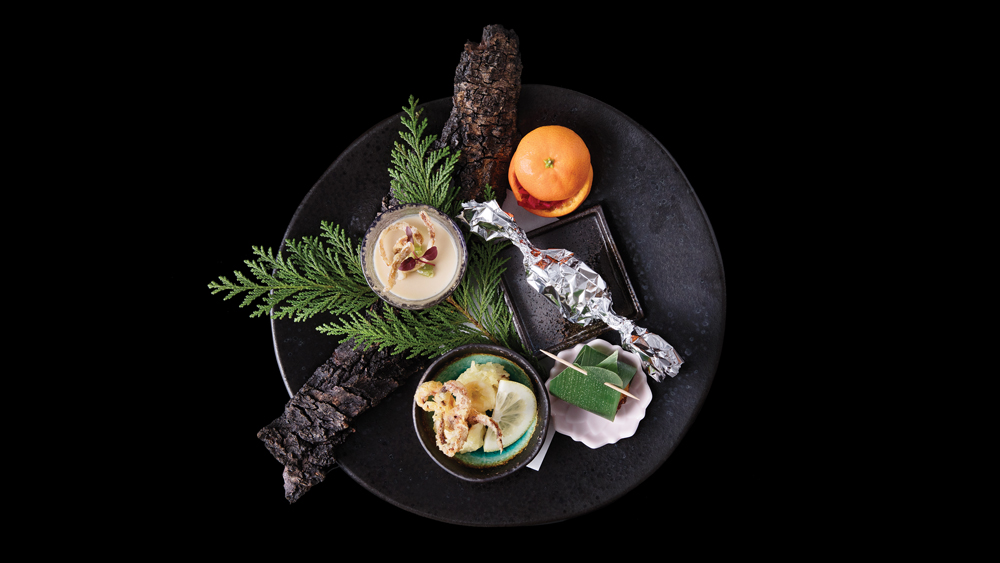 On a trip to Japan at the age of 18, Niki Nakayama visited her cousin’s inn for dinner. An 18-course meal soon unfolded in front of her—and it changed the native Angeleno’s life. From ingredients to cooking techniques to visual presentation, the menu was rich, varied, and engaging. “Every single thing was thoroughly thought through,” the acclaimed chef-owner of n/naka in Los Angeles says, “and it was all in harmony with the feeling, the atmosphere, the season. It was such a wonderful expression of seasonality that I’d never experienced before.”

What Nakayama was trying for the first time—and would eventually devote her professional life to—was kaiseki, a centuries-old Japanese form of dining that’s concerned about more than just the food served. Kaiseki is about expressing a time and place in nature through the flavor and visual presentation of a multicourse meal. Executed at its highest level, kaiseki is the epitome of fine dining and is influential well beyond Japanese cuisine alone.

The popular origin story for kaiseki is that it grew out of 16th-century Buddhist tea ceremonies, and its form was codified primarily by tea master Sen no Rikyū. The tale inflects kaiseki with a touch of the divine—but its history is more complicated and sordid than that tidy narrative, with roots in not only Kyoto teahouses but also in Tokyo’s old red-light district.

There are two styles of kaiseki. One is tied to the tea ceremonies, and the second is served in restaurants, like Nakayama’s. The two styles most likely split from a common origin and developed in parallel. “In the medieval period, you’d have warriors being served multiple trays of food all simultaneously. What the tea ceremony does is it just takes one or two of those trays and simplifies the meal,” says Eric Rath, a University of Kansas history professor who focuses on Japanese food culture. “The kaiseki version which you find in restaurants, instead of serving all the food at once, it’ll present those foods sequentially.”

Japan’s more sophisticated restaurants—the forerunners of kaiseki—started gaining a foothold about a century after the tea ceremonies “to cater to people who were visiting the Yoshiwara pleasure quarters, Tokyo’s brothel quarters,” Rath says. “It was a masculine thing to do. Men would go there to eat, drink, and be with women.” Kaiseki restaurants also evolved at tea houses and inns, catering to travelers visiting temples in Kyoto, Japan’s capital for more than a millennium. These establishments moved from serving just snacks to offering full tasting menus for their guests.

Some of those old restaurants still exist in Kyoto, like Heihachi Jaya, a teahouse inn established in 1576. “Travelers would stop in here to get supplies like a convenience store,” Rath says. The three-Michelin-star Hyotei, located near Nanzen-ji temple, catered to people visiting the shrine, and after 400 years, it’s still family-owned—Yoshihiro Takahashi is the 15th generation of his family to serve as chef in the restaurant. Kaiseki is not purely the province of dynasties. Outstanding restaurants have opened in Japan’s modern era, like the three-Michelin-star Kichisen, created by chef Yoshimi Tanigawa in 1983.

“The philosophical idea of kaiseki is you have to be representative of the area that surrounds you. You have to talk about nature,” Nakayama says. “You need to take all the great ingredients of that moment and find the best technique to present them. So it’s always constantly recalibrating on understanding the ingredient and finding the best method to highlight it. Today’s carrot might be really good if you ate it as a sashimi, but maybe tomorrow’s carrot is going to be more delicious if you braised it. Or, you know, maybe that same carrot, bringing out that flavor means you should fry it.”

For Nakayama, selecting the right ingredients also involves their aesthetics. Colors play an important role in conveying seasons to the diner. In spring, there’s more pink; summer is greener; she fills autumn with red, yellow, and gold; and winter has white and more dark colors.

That representation of nature unfurls in beautiful little courses that are meant to engage a diner’s senses beyond just taste. “The visuality is very important in Japanese cooking. It’s often said that Japanese food, you eat it with the eye,” says Rath, who studied Japanese theater before shifting his focus to food after experiencing kaiseki in Kyoto. “The chef was really good in the way he presented things. In terms of the visuality and performance, it struck me as very similar to Japanese theater.”

While chefs will modify the form to suit them, a kaiseki menu follows a prescribed flow with certain elements always present. Every course has a purpose and is connected to the ones before and after it. At n/naka, the meal begins with the merging of the common and uncommon to immediately engage the diner in thought, like her Kumamoto oyster and turnip puree dish. The following course is zensai, which is an appetizer of ingredients in season that can also foreshadow what’s to come later in the meal. “If I’m serving foie gras, I might have some duck in the zensai,” Nakayama says. “It’s like a table of contents when you open the book up. What’s happening? What’s going to happen?”

Nakayama varies slightly from form, introducing a modernist interpretation of sashimi before offering owan, the soup course. “The idea is to be a lightly seasoned, not-too-heavy soup because it’s trying to cleanse the palate before sashimi,” Nakayama says. After the soup is her traditional interpretation of sashimi, and then comes a grilled dish—perhaps eel. “Sashimi is light and simple, so I want to move into something heavy right after; then we go back to a steamed dish to cleanse the palate.”

At this point, Nakayama throws in a curveball—a course called shiizakana, which she describes as “not bound by tradition.” This is where she’ll show her love of pasta—which wouldn’t be in traditional kaiseki—and serve something like spaghettini with abalone. The menu builds to niku, the meat course, which might feature a rich piece of Miyazaki A5 wagyu beef. The meal then brings you back down with a salad, a rice course served in the form of sushi, and then a dessert that showcases seasonal fruit before finishing with tea. “I feel like it’s an album because everything’s connecting one to another, and there’s this whole idea behind it,” Nakayama says.

The flow of a kaiseki tasting menu may not seem that novel for anyone who frequents fine-dining restaurants, especially French ones. After all, go to Thomas Keller’s Per Se or the French Laundry, and the first course is the merging of something common and uncommon in the parlance of Nakayama.

“We open up with something amusing, something that breaks the ice. The cornet we serve, you have a look at it and go, ‘This looks like an ice cream cone,’” Keller says. “It reminds you of an ice cream cone, but it’s a cracker with sour cream, onions, and salmon. You know it is such a basic flavor profile, but it’s served in a different way.”

The ethos of kaiseki moving beyond strictly Japanese restaurants like n/naka, Kichisen, and Hyotei owes partially to Keller’s idol, Paul Bocuse. The chef who revolutionized French cooking in the 1960s and ’70s with nouvelle cuisine visited Japan and was impressed by kaiseki’s beauty and progression. He incorporated elements of the art into his culinary philosophy and how he built cohesive tasting menus. As Bocuse’s influence spread globally, so did those elements of kaiseki to the point where chefs from Santa Monica to Charleston started basing their restaurants on the practice.

“Tasting menus that you see today around the country, whether it’s 12 courses or 25, are really based on that kind of experience,” Keller says. “Kaiseki is kind of what we do at the French Laundry, with different experiences at intervals that lead you to a crescendo.”

In kaiseki, that crescendo should have greater meaning than merely tasting a good meal. It’s not just the rote application of cooking techniques and following a tasting-menu rubric. “The season right now is yielding these wonderful vegetables, fruits, and things that we can harvest or catch from the ocean,” Nakayama says. “It’s a reminder that life is so much bigger than who we are and for us to just take the time to appreciate what nature is always giving us. It’s about being grateful and appreciating the moment that is here and now.”