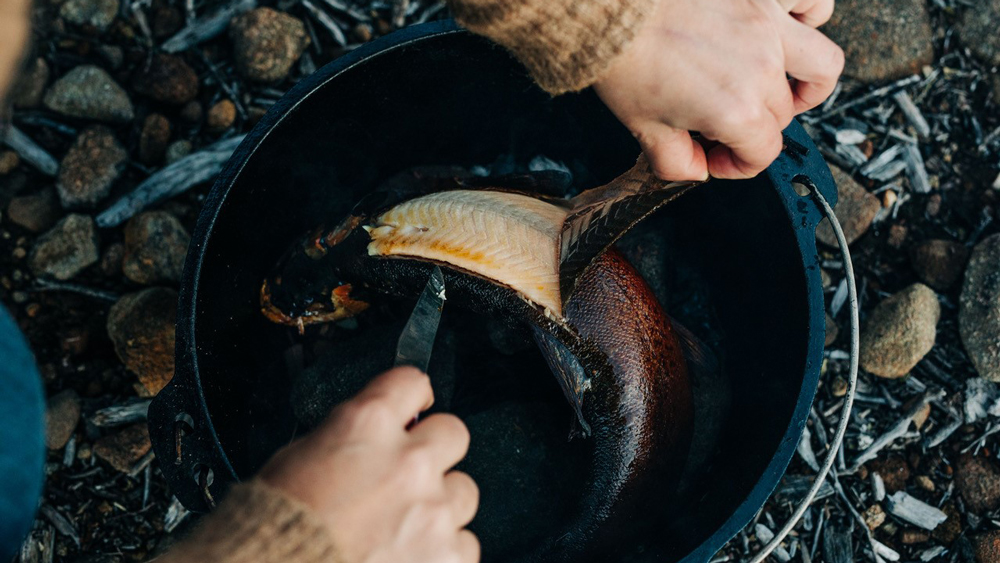 Analiese Gregory has worked for outstanding restaurants across Europe. In London, she spent time at Michelin two-star Ledbury, in France it was legendary Michel Bras and in Spain she worked for endlessly creative chef Andoni Aduriz at Mugaritz. The New Zealander eventually made her way to Australia to work for Quay and while she contemplated going back to the northern hemisphere for more haute gastronomy, she instead relocated to Tasmania to lead Franklin in Hobart.

Eventually, she decided to leave that behind as well, renovating a 110-year-old farmhouse returning her cooking closer to the land with her foraging, hunting and fishing in on the island to the south of the Australian continent. Now, she’s bringing that ethos to debut cookbook How Wild Things Are. Here, Gregory shares her recipe to smoke your own trout, either over campfire or even in your own oven at home.

Once a year growing up, my family would decamp to Lake Taupo for trout season. This involved some atrociously bad fly fishing, sitting in rocky thermal heated streams and eventually taking a charter on the lake to actually catch some fish. As a fourteen-year-old interested in cooking, I smoked out many hotel rooms and set off countless fire alarms trying to smoke fish for my family. This is the method I use now, at work and at home. Once you get a feel for cooking the fish, it becomes a truly enjoyable thing to make.

In a bowl, mix the salt and sugar thoroughly. Sprinkle some into a tray. Put the clean fish down on top, then open the cavity and evenly sprinkle the inside with the curing mix. Pat the rest on top, then cover and refrigerate the fish for 12 hours or overnight.

Wash the cure off the fish, pat dry and leave on a tray in the fridge so the skin can dry, approximately 6 hours.

Preheat a smoker to 60°C (140°F) and use your choice of wood chips. In New Zealand, we would often use manuka, a native variety of tea tree. Once the chips are smoking and the chamber is preheated, lay the fish on an oiled rack (this will be important for removing it after). I cook it to an internal temperature of 58°C (136°F) so it is still extremely moist and the protein is just set, but you can take it higher if that is your preference.

I have also done this many times in an oven. Just preheat to 58°C (136°F), get a small tray of wood chips smoking and slide it into the bottom of the oven while your fish is in there.

Recipe excerpted with permission from How Wild Things Are by Analiese Gregory, published by Hardie Grant Books.