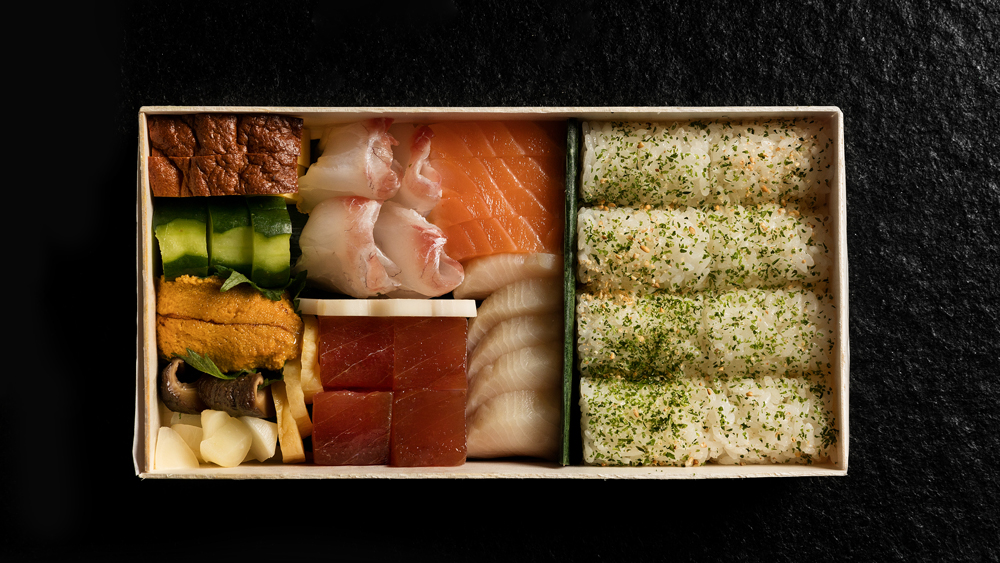 Chef David Schlosser tiptoes around the word “modern.” The chef and owner of Michelin-starred Shibumi in downtown L.A. is, after all, a Japanese cuisine goodwill ambassador, a title given to him by a consul general in the U.S. for promoting the country’s “cuisine and culture in the proper way.”

So while his new Japanese spot Imari—which opens next month in Brentwood—differentiates itself from other concepts in L.A., it’s not because it reimagines what Japanese food can be overseas. It’s because it showcases what traditional Japanese food, the UNESCO-recognized format known as washoku, already is and has been for thousands of years.

“Imari is a new brand, a new identity. And to create that is not easy, to be honest,” he said.

He needed to remain respectful of the cuisine’s origins, but mindful of where the restaurant is located.

“We’re doing a Japanese restaurant in California, so what does that mean?” he said. “It means we are responsible to use the beautiful ingredients of Southern California. This is not fusion. We’re not using cream, butter and olive oil, ingredients from Europe, let’s say. But we are using stuff from California, mostly vegetables, as we should.

“I wanted the recipes to be a little more light, a little more vegetable-heavy and fresh. The Japanese like to do a lot of cooked vegetable salads called ohitashi. We’re going to be doing some versions of ohitashi, but because we’re here, I want to do some salad salad, where we use, let’s say Japanese greens, daikon radishes. There’s a lot of growers doing Japanese vegetables here in California.”

He also plans to get tofu and fresh soy milk onto the menu, in dishes like summer-friendly hiyayakko, or chilled tofu topped with fresh vegetables, herbs, and a soy sauce-dashi broth.

“Tofu is one of those ubiquitous ingredients that is completely underrated,” he said. “We have one of the best tofu manufacturers in the country called Meiji out of Torrance. They’ve been there for 40 years.

“That’s the initial direction. We can morph it down the line.”

Schlosser’s thoughtfulness is exactly what restaurateur Philip Camino of Camino Industries (Fellow, The Hudson, Earthbar) wanted when he tapped him to run the kitchen alongside chef de cuisine Derek Wilcox, formerly of New York’s Shoji.

“Derek and David trained together in Japan, years ago, at a three-star Michelin restaurant in Kyoto called Kikunoi,” Camino said. “They maintained that relationship for years, even after Derek moved to New York and David moved to L.A. These two guys together in the back of the house creates this dynamic duo that no one else has. This level of talent coming together to make this menu, launch this brand and do a project of this scale doesn’t really exist anywhere else in L.A.”

As of June 11, Imari is already whetting the appetites of diners on the west side with its phase one launch: to-go and delivery bento boxes. They are available 5-8:30 p.m. on Wednesdays and Thursdays and 5-9 p.m. on Fridays and Saturdays.

The fresh, seasonal seafood used in the boxes is imported from Japan, flown into LAX and transported directly to the restaurant via a delivery driver. Most other restaurants in L.A. receive their seafood through distribution warehouses, where it is often frozen for transport, Camino said.

“We actually pick up like 24 to 48 hours of freshness on the fish going onto the plate,” Camino said. “Because you’re cutting out that travel and distribution warehousing time. We will never use frozen.”

Phase two, the full opening, is slated for July 16. Imari will continue to offer the bento boxes at that time and Camino believes launching the bento boxes first gives that side of the business time to breathe. The boxes won’t lose their quality or ranking in the list of priorities when the full restaurant opens.

Once service does commence there will also be two outdoor patios, a sushi bar with omakase, a wide sake program, an extensive wine list, a guest services expert poached from Eleven Madison Park and even a water sommelier. By the time the full restaurant opens, the team hopes to have built a custom water filtration system to recreate the pH, salinity and mineral content found in Japan’s water, in L.A. It will alter the way Imari’s food tastes.

“I worked at this restaurant in the mountains near Kyoto and we would make dashi broth every day,” Schlosser said. “One day, I took some of the seaweed and the bonito flakes and went down to Kyoto, which is about a two-and-a-half-hour drive. I made broth with that same seaweed and my mind was blown. The broth tasted completely different. The seaweed reacted differently to the water. And that’s when it really hit me: The water is a big deal. It makes a difference.”

To coincide with the opening in July, Imari will offer its own version of happy hour, called “Golden Hour,” from 4-6 p.m. They will serve a half-dozen appetizers and a limited drink list to give people a feel for the restaurant before sitting them down for the full dining experience. Schlosser said he’s starting safe with salads, sashimi, tempura and wagyu until they fully understand what diners want out of the restaurant.

“I want to keep it simple. I don’t want to reinvent the wheel or shock anybody,” he said. “Having Nagao there for that long is always on my mind. I don’t want the customer to be like, ‘Why are they serving octopus heads? What happened to this place? What’s going on here?’

“I want to catch people off guard with our omakase, which we’ll do down the line, or in our specials. Let’s take our time, let’s work our way into some more esoteric ingredients.”