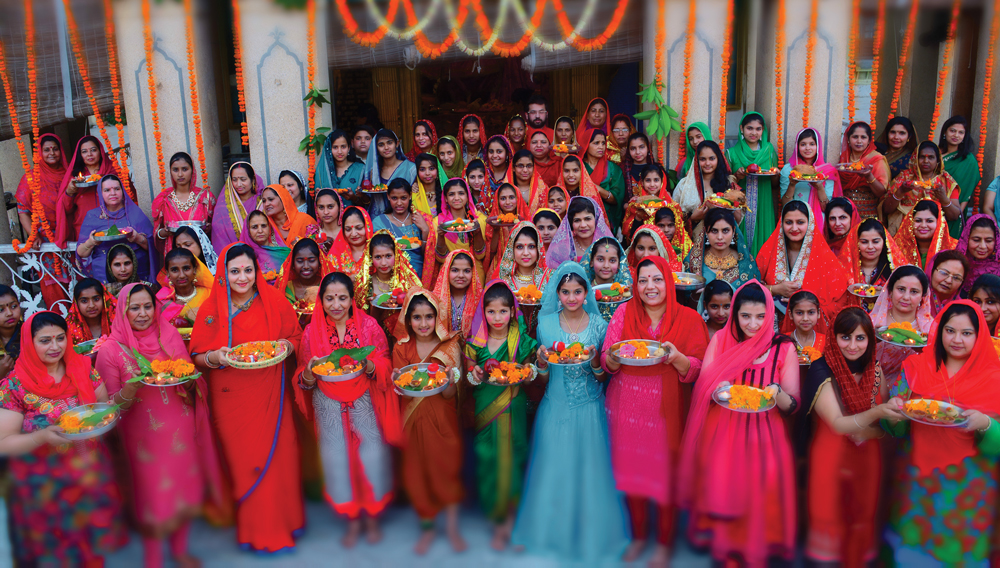 Vikas Khanna, an Indian chef based in New York City, changed the recipe for a book launch last spring when he introduced what may be the most lavish cookbook the world has ever seen at the Cannes Film Festival. Utsav: A Culinary Epic of Indian Festivals is a 1,200-page, 35-pound, gold-embellished homage to Indian culture and cooking, with a first printing that comprises a mere 12 copies. The large-format tomes, hand-inked with gold on the front and back covers, will each be cosseted in a box created by an artisan whose work represents India’s different regions. Eleven copies are intended as gifts to world leaders such as Queen Elizabeth II and President Obama. “Hopefully I will be able to hand-deliver [them all],” says Khanna, whose Manhattan restaurant Junoon holds a Michelin star. “It is a very humbling experience to hold a piece of your motherland and hand-deliver it to the world.” The remaining copy will be offered in an online auction (for details, see vkhanna.com) beginning October 2, Mahatma Gandhi’s birthday. The starting bid is $13,000, and proceeds will go to the Smile Foundation, which provides education and nutrition for needy children, and for which Khanna is a global ambassador.

After the auction, in mid-November, 1,000 copies will be released by Bloomsbury Publishing to coincide with India’s five-day Diwali festival of lights. Priced at about $250, this version omits the hand-painted gold highlights but still presents a lavish spread of Indian culture, “the infinite celebrations of centuries of continuation,” as Khanna puts it, including a look at 70 festivals and ceremonies across the country and more than 500 recipes. Khanna, who also hosts MasterChef India, has previously written 20 cookbooks, and his Holy Kitchens documentary series, which explores the spiritual aspects of sharing food, has been incorporated into the curriculum at Harvard Divinity School. “From Diwali to Christmas to Eid to Rosh Hashanah,” says the author, “the book is a true visual tribute to India.”