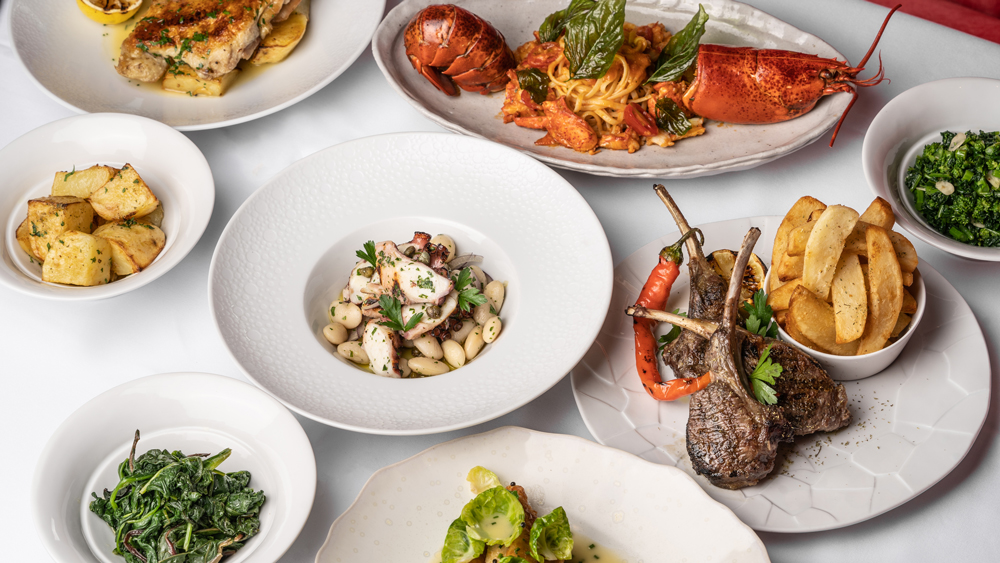 For as little as $500, you can create a house account at multiple Michael Mina restaurants in San Francisco and beyond. This is as simple as downloading and making a $500 purchase on the inKind app, which works with restaurants to create exclusive perks for customers. In the case of Mina’s participating restaurants, which include Pabu Izakaya, Estiatorio Ornos and International Smoke in San Francisco, that $500 gets you $500 in food-and-beverage credit plus a bonus $75 credit. The bonuses go up significantly if you spend more money: $1,000 gets you a $200 bonus, and $5,000 gets you a $1,500 bonus.

Guests with house accounts can order secret menu items (available on every visit without advance notice), such as a Japanese toro, Santa Barbara uni and golden osetra caviar bowl that’s put together at your table at Pabu. Being an inKind member also gives you access to priority reservations and lets you pay the check and add gratuity with the app and without the need to let your server know that you’re leaving. (InKind credits can be used for food and beverage but not for gratuities.) And some of the most exclusive experiences at Mina’s restaurants are available only to those with inKind house accounts. One example is a $4,000 Japanese whisky-and-Wagyu tasting at Pabu. Another is a $700 customizable tasting menu at Estiatorio Ornos, where your Greek seafood feast could include lobster and a variety of top-tier fish prepared in distinct ways.

“We could start with a crudo and then go into a phyllo-crusted and then into a salt-baked and then into that traditional wood grill and then into a beautiful bouillabaisse-style braise or poached fish,” says Mina, who adds that inKind members can also request tastings that include their favorite dishes from the regular Estiatorio Ornos menu. “It’s giving them an experience of these really unique fish with the absolute best cooking technique possible for that particular fish.”

InKind, co-founded by serial entrepreneur and longtime technology and restaurant investor Johann Moonesinghe, is a company that provides financing to restaurants without taking equity or giving out loans. Instead, inKind gets $200,000 in food-and-beverage credit for every $100,000 in financing it provides. It then sells this credit while helping restaurants, both big and small, with marketing, customer retention and even back-office infrastructure and money management when necessary. InKind also offers customers bonus perks that encourage them to try new restaurants.

“On the back end, we’re starting to associate everything on your check with you as a diner,” says Moonesinghe, who is inKind’s CEO. “We understand that, oh, you love high-end barolo. And then if we’re working with another restaurant near where you live that we think you would like, we might send you $50 in credit to that restaurant just as a gift.”

“We’re brainstorming constantly,” Mina says. We travel together. We conceptualize together. That’s what a true partnership is.”

Last week, Mina Group president Jason Himber was in Austin, where inKind is based, and scouted potential restaurant locations with Moonesinghe. The plan, Himber says, is for Mina Group to open its first Austin restaurant later this year before debuting several more Austin spots.

Even though InKind members get bonus credits, Moonesinghe says his company has data that shows how restaurants and their servers make more money with house accounts. While the inKind app does include casual grab-and-go spots like Bluestone Lane coffee shops, the majority of its restaurants offer multi-course sit-down meals. And these restaurants, Moonesinghe says, tend to see inKind members spend 80 percent more per visit and dine two-and-half-times as often than other guests. Plus, every inKind member is flagged as a VIP.

“It’s really interesting because they tip way way more than an average customer,” Moonesinghe says. “We’ve been working with the Ravenous Pig, the James Beard nominee in Winter Park, Florida, for years. The average gratuity for an InKind house account-holder is 28 percent. And the reason is because they’re getting such good service.”

When Mina first learned about inKind about a year ago, he was intrigued by the concept and did his due diligence.

“It wasn’t like this coupon company,” he says. “You have to layer in, what are the advantages to it? And how are you going to work together as a team? The thing was really trying to create these elevated experiences and bring new clientele to your restaurants. And when you really ran the numbers on it, it started to make a lot more sense.”

It helps, for example, that about 20 percent of credit is never redeemed. It also helps, as Himber points out, that partnering with inKind spurs “menu engineering” at restaurants.

“When we offer inKind experiences, I want them to be worth the money,” Himber says. “At the same time, it allows me to really put higher-margin items and things that really drive better profitability front and center.”

Moonesinghe, who used to run a restaurant incubator in Washington DC, says inKind is a response to the “broken model” of restaurant financing that involves lengthy paybacks to investors and many restaurateurs walking away from their businesses because they’re working tirelessly for little money. Moonesinghe remembers the challenges of being a traditional restaurant investor before he launched inKind in late 2016.

“The best one I invested in was Bryan Voltaggio’s Volt,” says Moonesinghe, who adds that 90 percent of the close to 30 restaurants he put money into before inKind never even paid back his initial investment. “It doesn’t exist anymore. My mom and my husband, Andy, and I had dinner there. We ate in the kitchen, you know, with free food and free wine. And my mom was like, ‘Johann, this is the best investment you’ve ever made.’ Because it was fun. And I was like, ‘Well, This is a $50,000 dinner.’ The restaurant wasn’t profitable. It’s really hard to run a high-end fine-dining restaurant that’s profitable.”

That has only become more evident during the Covid-19 pandemic, which Moonesinghe says has accelerated inKind’s growth by 10 years as restaurants fight to survive and find financing. Moonesinghe has plans to partner with hundreds of other restaurants in the near future, and he wants to make it clear that independent mom-and-pop operators get the same terms as heavyweights like Mina, Meyer and Andrés.

“My heart is in independent restaurants,“ Moonesinghe says. “Before Covid, we had funded about 350 restaurants, and only two closed during Covid. I love independent restaurants and creating a financing package that actually allows them to make more money and keep the money in their pockets. One thing that I love to tell restaurants is that running one restaurant is really really hard. If you can get to three, though, you can hire a director of operations. At some scale, it actually becomes easier and you’ll make more money.”

“What he’s saying is that this is for everybody,” Mina says. “This is for the small up-and-coming chef. They can build up their check average and launch in a new market. He’s really covering a broad scope, which is very smart.”