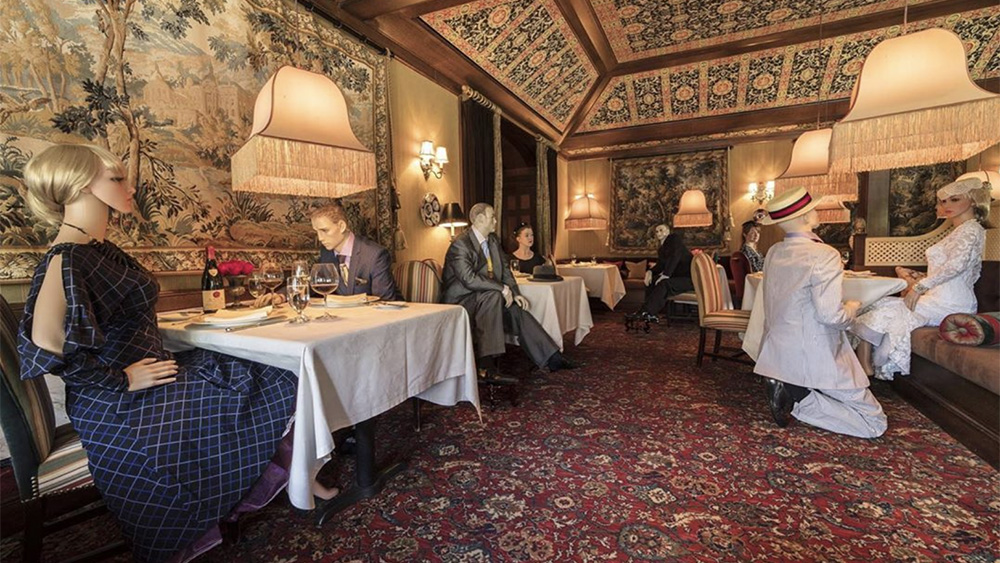 While parts of the country may be starting to lift some coronavirus restrictions, that doesn’t mean life will return to normal just yet—especially in the culinary world. That’s why one Washington, D.C.-area restaurant is taking a dramatic measure to make dining while social distancing a bit less lonely—and perhaps just a little more creepy.

The Inn at Little Washington, the region’s only restaurant with three Michelin stars, plans to use snazzily dressed mannequins to fill up its dining room when it reopens at limited capacity later this month, according to a press release. And while the restaurant admits its solution is a bit out there, the owner think diners will be able to have some fun with the mannequins.

In compliance with social distancing guidelines, the Inn will operate at half capacity when it reopens. Because of this, chef and proprietor Patrick O’Connell has decided to “theatrically” dress tables in the dining room with dummies rather than leave them empty. And to make sure that it looks as convincing as possible, the restaurant is working with the locally based Signature Theater and Design Foundry to create the “sets.”

“I’ve always had a thing for mannequins—they never complain about anything, and you can have lots of fun dressing them up,”  O’Connell said in a statement. “When we needed to solve the problem of social distancing and reducing our restaurant’s occupancy by half, the solution seemed obvious—fill it with interestingly dressed dummies. This would allow plenty of space between real guests and elicit a few smiles and provide some fun photo ops.”

Yes, it may seem a little odd and baroque, but O’Connell just might know what he’s doing. Last year, he won the James Beard Lifetime Achievement Award, after all. The self-taught chef and pioneer in America’s farm-to-table movement was also the focus of PBS’s The Inn at Little Washington: A Delicious New Documentary, which premiered in late March.

Located 90 minutes outside D.C. in the pastoral Blue Ridge Mountains, the Inn at Little Washington plans to reopen its dining room on Friday, May 29. If you can’t wait until then, the restaurant will also be offering a guided Garden and Grounds Tour and Box Lunch from 11 am to 1 pm on Fridays, Saturdays and Sundays, starting on Memorial Day weekend. Tickets are $50 per person and can be purchased through the establishment’s website.