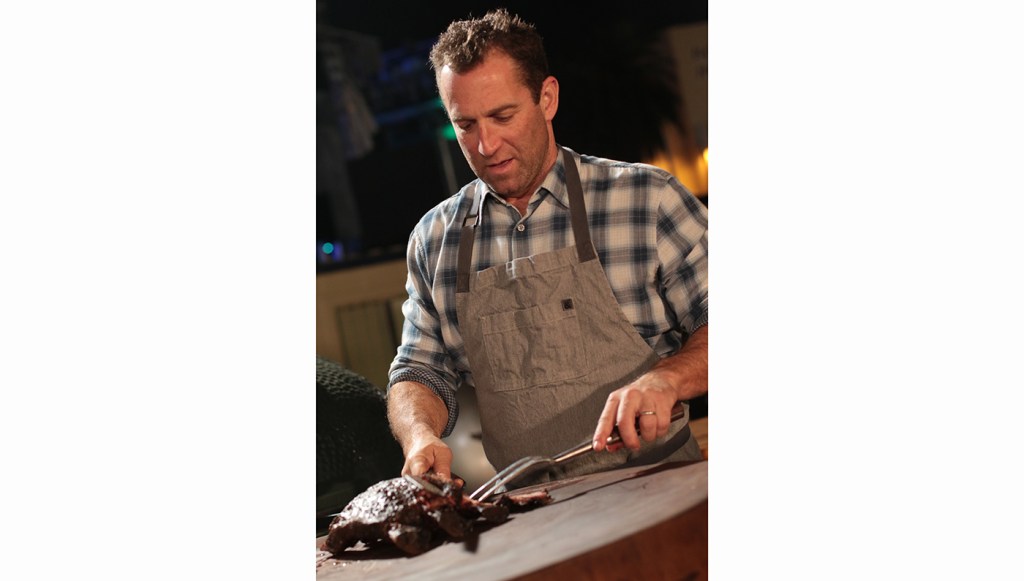 It has been said that, with few exceptions, you cannot get good barbecue beef ribs in Los Angeles. But when internationally acclaimed barbecue expert Adam Perry Lang’s newest restaurant opens this summer on the star-struck corner of Hollywood and Vine, L.A. may become the barbecue beef rib capital of the world. At least it will if this classically French-trained celebrity chef and barbecue book author has anything to say about it. And when it comes to barbecue, the award-winning Lang has plenty to say, as we discovered at a pop-up grill gathering held on the back lot outside the Jimmy Kimmel Live studio in Hollywood.

You were born in Brooklyn, graduated with distinction from the Culinary Institute of America, and worked your way up through the demanding kitchens of top-rated French restaurants, including Le Cirque and Daniel in New York City, and Restaurant Guy Savoy in France. It would seem that barbecuing would be at the opposite end of your cooking spectrum. What caused this culinary 180?

It was cooking with fire that really attracted me. At the time, in 2000, when I first started cooking with barbecue, it was a reaction to the scientific ways of cooking and boiling and things like that. For me that was so sterile. I really wanted to get into a style of cooking that was more connected to actual cooking. So I went in the opposite direction; I went toward cooking with fire.

You were taught French cuisine by some of the best chefs in the world. How did you learn the techniques of barbecuing?

It was just doing it and meeting people—from home cooks to professionals—and picking up their different thoughts and methods. Plus, I had a really good sense of what it was all about. So that began the evolution for me.

How does your barbecue technique differ from what other people are doing?

I focus on burning clean wood, so that it’s not dirty and overly smoky. By that I mean I don’t like to burn wood in a way that it smolders and gets sooty. It may make the meat taste good up front, but you can’t digest it very well. I like burning and making my own charcoal naturally, and that residual heat, that blue smoke that comes off of the coals, emphasizes the flavors.

So is it fair to say that yours is a gentler form of barbecue?

Well, it’s strong; I cook with post oak and pecan wood. Post oak can be pretty strong, but pecan is less acrid and is a little bit sweeter. If I had to pick just one wood, it would be pecan. But post oak really gives that identity that’s associated with beef barbecue that you typically find in the Texas Hill Country, for example.

Texas is a far cry from Los Angeles. What made you decide to open a barbecue restaurant in L.A.?

I had a restaurant in London called Barbecoa with Jamie Oliver but eventually sold my share of the business to him because I wanted to come back to the States. In 2003 I opened a barbecue restaurant in New York called Daisy May’s, which I eventually sold to my partner because New York wasn’t grabbing me like L.A. was. There was something about L.A.—the lifestyle, the farmer’s markets, and the local influence. I decided to move the family here and found a beautiful location in Hollywood in the Taft Building—L.A.’s first skyscraper. It’s 12 stories high and was built in 1923. I was looking for something with character and that had energy. I looked for it in New York, but I found it in Hollywood, where the area was going through a transformation, where people cared and still wanted to preserve the character of the area. So that’s where I landed. My restaurant is scheduled to open around June 2017.

What will you call it?

APL, my initials. And it’s not going to be just a barbecue restaurant. I’m going to have a small area, which was a former one-chair barbershop, adjacent to the restaurant. That’s where I’ll be carving my meats, so it will be open for lunch only, maybe with a takeout window. Then for dinner, it will be an American restaurant with a wider format.

I don’t look at it as barbecue. I think of it as fire-roasted meats. I think barbecue, when it’s a success, is doing a lot of little things right. It’s the sauces, spices…it’s everything, a never-ending tweaking. I am constantly active with my cooking. I’m turning, basting, spraying, whatever I’m doing, I develop a relationship with the meat, to see how it’s reacting. I’m always figuring out what needs to be done next, as it’s cooking.

So do you have some barbecue tips for our readers?

I love using my herb brush, which accents the flavor toward the tail end of cooking. It’s a bundle of herbs tied with twine to a wooden spoon. I baste with it instead of using a regular brush.

The biggest thing is just having patience, following the recipe, and not getting too anxious with opening and closing the cover [of the grill] to check on the meat, so that you are able to maintain a stable temperature.

You’ve taken gold in several national pork barbecue competitions, and yet, you also oversee the dry aging of beef at CarneVino in Vegas and are famous for your barbecued Angus beef ribs. Would you say beef or pork ribs would be your signature dish?

I cook everything, so I don’t really look at anything as a signature dish. But if I had to pick something, I’d have to say beef ribs. They are the perfect expression of beef, which has always been a symbol of affluence in American culture. Pork just doesn’t have that affluence.