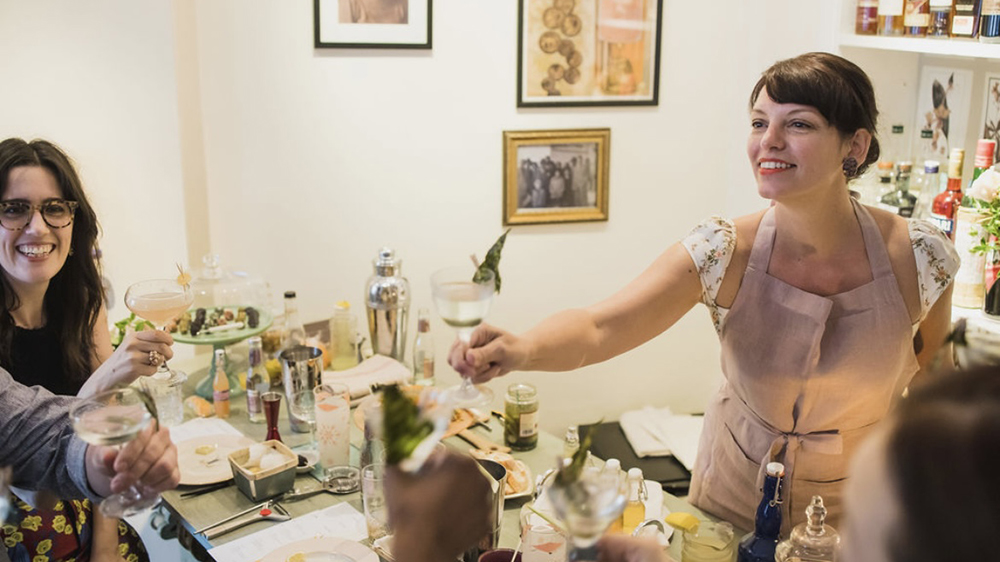 After two and a half years of pandemic life, many people are clamoring to go out. Restaurants are packed; bars and clubs have never been livelier; and it seems like just about everyone you know was in Italy or Portugal over the summer (must have been nice …).

But just as many people are perhaps a bit more hesitant to reenter society so fully, or they’ve realized that they actually like not going out so frequently, and in such a big way. Those people are in luck, then: A new crop of intimate, exclusive experiences is giving people a new way to interact with the culinary world and build community with fellow food and cocktail lovers.

In her Murray Hill walkup, Georgette Moger-Petraske hosts one such experience: Regarding Oysters, “an evening of bivalves and curated cocktails,” as she bills it on her website. For groups of up to six people, Moger-Petraske serves hors d’oeuvres and drinks, many of them craft cocktails from the history of Milk & Honey, the game-changing New York City cocktail bar founded by her late husband, Sasha Petraske. Along with being the consummate host—the whole evening feels as if you’re in a 1930s Paris salon—Moger-Petraske also teaches her guests how to make the drinks themselves and how to shuck oysters.

Her best friend “always said, ‘A woman who can shuck her own oysters is beholden to no one,’” Moger-Petraske told me. So during the pandemic, she thought, “If I can teach people how to shuck oysters and make their own cocktails, they can have their own cocktail parties at home for their quarantine group—their pod friends.”

Even now, though, when people can go out and imbibe at all sorts of places, they’re still attracted to the coziness of Regarding Oysters. “They’re craving these intimate experiences more so than just going to a bar that they’ve heard about or a restaurant that they want to check off their list,” Moger-Petraske said. “You can check those things off anytime.”

It’s also in that spirt that Matt Levy runs the Covert Cocktail Club. Prior to the pandemic, he operated a true speakeasy out of his home, welcoming strangers into the space while his kids slept upstairs. A self-taught bartender, he would host small groups of people for cocktails and conversation, sharing his knowledge and personalizing the experience for each person who walked through his door—once they had taken their shoes off.

“When you force someone to take their shoes off, their defenses are down,” he told me. “It forces a level of comfort that is then further reinforced through the hospitality and generosity of your drinks and knowledge.”

During the pandemic, the Covert Cocktail Club transformed into a virtual affair, but now that we’re at least partially on the other side of things, Levy is transitioning into a version of the club that he calls “Have Shaker, Will Travel.” Currently living in a rental, instead of inviting people into his own home, he’s traveling to them, but bringing the same level of comfort and conviviality into their spaces. “I missed doing it in person because there’s a tangible something that isn’t there,” Levy said. “I open up my knowledge base and my passion to people that want to know more. And that thirst for intimacy, firsthand experiential knowledge, can’t be done in a group.”

A handful of people, though, have figured out how to share some of that knowledge at slightly larger gatherings. Emma Ponsonby started the travel company Satopia as a way to bring people together. And one of the best ways to do that? Through food and wine. So Satopia teams up with acclaimed chefs such as Dominique Crenn and Francis Mallmann to host small group trips in remote locations where the guests get to know the chefs and eat their delectable food.

On Satopia trips, groups range from eight to 46 people, with 16 to 20 being the usual size, Ponsonby told me. Some travelers may choose to book out a trip with people they know, but often it’s a bunch of strangers getting together for a few days of great meals, wine and conversation.

“By about the second evening or the third day, something happens on every experience where all of a sudden everybody’s best friends, and it’s like everybody has known each other for so long,” Ponsonby said. “And you know that the host is no longer the host but just another person who’s on this experience. And there’s so much respect and so much curiosity about Who are all these other people that are now kind of in my world and I’m sharing this experience with them?”

It’s that sharing of experiences that people came to really miss during the pandemic, and that they’re craving deeply now. And not just in the sense of going to a bar or restaurant and having your own experience in the middle of a million others, but sharing your time and your knowledge and your life with people who are just as excited to do the same. That’s what these experiences provide, and what Moger-Petraske, Levy and Ponsonby have all hit on: There’s something to be said for being taken care of, but in a way that leaves room for a bit of adventure—“baby-steps adventure,” as Levy put it to me.

“When you take something away from people, then they realize how much it actually matters to them,” Ponsonby said. “Then you give it back to them and they’re so much more appreciative of having that human connection and actually making the effort to go somewhere and see people face to face.”

It makes it only better when that somewhere is a beautiful New York City apartment or Francis Mallmann’s private island in Patagonia.