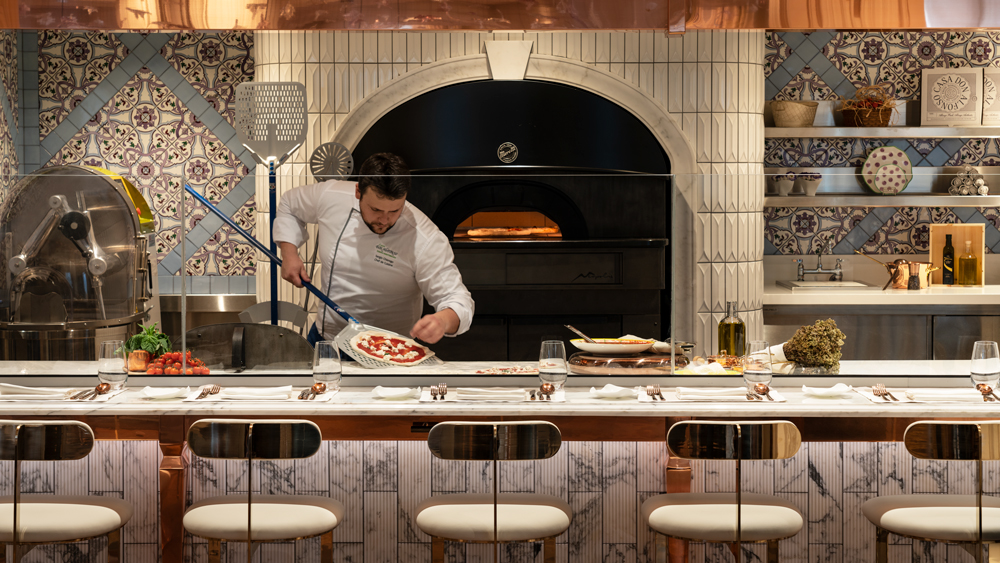 A couple of years ago, during a trip to Italy’s Sorrento and Amalfi Coasts, I followed the example of nearly 50 years of foodies before me and made my way up to the tiny hillside town of Sant’Agata dui Due Golfi, which sits overlooking the bays of Salerno and Naples. It’s there, on quiet main street and behind a non-descript gate, that you’ll find Don Alfonso 1890, the intimate Michelin-starred restaurant known for its menus of elevated, but still authentic, regional cuisine, crafted using ingredients from the restaurant’s own nearby organic farm and orchards.

My dinner alone was worth the detour from the coast—full of dishes both refined and playful—but as I discovered during my meal and one night stay in the B&B-style rooms above the restaurant, the Don Alfonso allure is about more than the food. It’s about how the convivial, welcoming Iaccarinos—husband-and-wife Alfonso and Livia, who founded the restaurant in 1973, and sons Ernesto (the executive chef) and Mario (the restaurateur)—instantly make everyone feel like family. (Just try to leave without having a jar of their organic preserved tomatoes pressed into your hands.)

It’s a winning formula that has also over the years prompted several international guests to suggest that the Iaccarinos open a Don Alfonso in their own hometowns, wherever in the world they may be. So about 25 years ago, the family opened a consulting arm, and has since launched both permanent and pop-up restaurants in such spots as New Zealand, Morocco, Canada and Macau. The US, however, never seemed in the cards—until some enthusiastic diners from St. Louis connected Mario Iaccarino (who oversees the consulting business) with friends who own a luxury hotel in the Missouri city. On March 21, the result of that meeting will come to life as Don Alfonso introduces its first US outpost—Casa Don Alfonso—in the recently relaunched Ritz-Carlton, St. Louis.

“We don’t start with an idea about where we want to go—people are interested and approach us, and it just happens,” says Iaccarino about how the American outpost came about. Regarding the why of St. Louis, though, he is much more effusive. “From the first moment I walked into what would become the hotel, I felt a very similar attitude to what we have at Don Alfonso in Italy—I had the feeling that I was entering into a family, because they operate in that way. We reflect the same ideas, and that’s why I felt we had to do something here. It may sound strange, but I found myself in a familiar place, even though I had never been to the city before.”

For this incarnation, Iaccarino strayed from the fine dining formula in favor of something he thinks better fits the location, meets the needs of hotel guests and reflects the current state of the world. “In Italy, we do fine dining, but we never take ourselves too seriously, and Casa Don Alfonso will represent that more casual feel,” he explains. “Especially now, with everything we are all living through, the goal of restaurants should be to let people relax—to be a place of lightness and happiness. People are tired, and we want to go to restaurants to enjoy the experience, not to be intimidated by the maitre’d! We started working on this a long time before Covid-19, but I think this could actually be the right moment for this type of project.”

The approachability starts with the design of the 140-seat restaurant, which offers guests the option to sit in the main dining room, in a relaxed lounge or at counters surrounding the open kitchen and wood-burning pizza oven. Colorful hand-painted tiles by Italian ceramicist Giovanni de Maio line the kitchen, while Mediterranean-inspired paintings by Italian artist Anna Russo—a friend of the Iaccarinos—are hung throughout, along with photos of the family back home. The light purple accents and cascading glass wisteria chandelier, meanwhile, are nods to the lavender fields of Sant’Agata.

To develop the culinary concept, Iaccarino and his team did a one-and-a-half-year “deep study into the food culture of the Naples and Campagna regions, where the sea is the protagonist, and where there’s historically been a mix of cultures. We looked into a world that doesn’t exist much anymore.” The resulting menus reflect “the dishes I would eat when I went to my grandmother’s for Sunday lunch,” he says, “but the original versions, not the changed recipes we know today.” So the lasagna, for example, is “the original Neapolitan interpretation. No Bolognese, no chopped meat—just big pieces of meat that we cook slowly with red wine, carrots, celery and bay leaves for about five hours, then slice and add to the pasta with ricotta. And hardboiled eggs—that is the way you know this comes from a real Neapolitan grandmother.” There will also be coastal favorites like fish Acqua Pazza and fritto misto the way they do it on the streets of Naples, along with traditional pizzas, pastas (like ziti baked with Amalfi Coast anchovies and noodles mixed with potatoes and smoked scamorza), a “rediscovery” of chicken Cacciatore and a selection of vegan and gluten-free “anti-aging soups.”

“We are making the classics in a simple and healthier way, which goes back to the roots of the Mediterranean diet,” Iaccarino explains. “I can say the menu is similar to what the Don Alfonso 1890 menu looked like for its first 15 years—all these simple things that are part of our tradition, and a preservation of our history. But at the same time,” he adds, “I am totally convinced that traditional food is also the food of the future. I really think it’s what the world will be expecting to enjoy when sitting at the table for the next 50 years.”

Several of the key ingredients—including the extra virgin olive oil and dried pastas, as well as wines and the Don Alfonso house limoncello—will be shipped over from Italy, but the team will also be working with regional purveyors to feature fresh proteins and produce. But the most important thing the Iaccarinos want to import to the US is their hospitality. “There is a historic appreciation of Italian cuisine in this country, and it brings together all these generations of families who are so strongly attached to their traditions. So when I think of these authentic Casa Don Alfonso recipes, I think of my family, and of bringing a small part of us to you.”