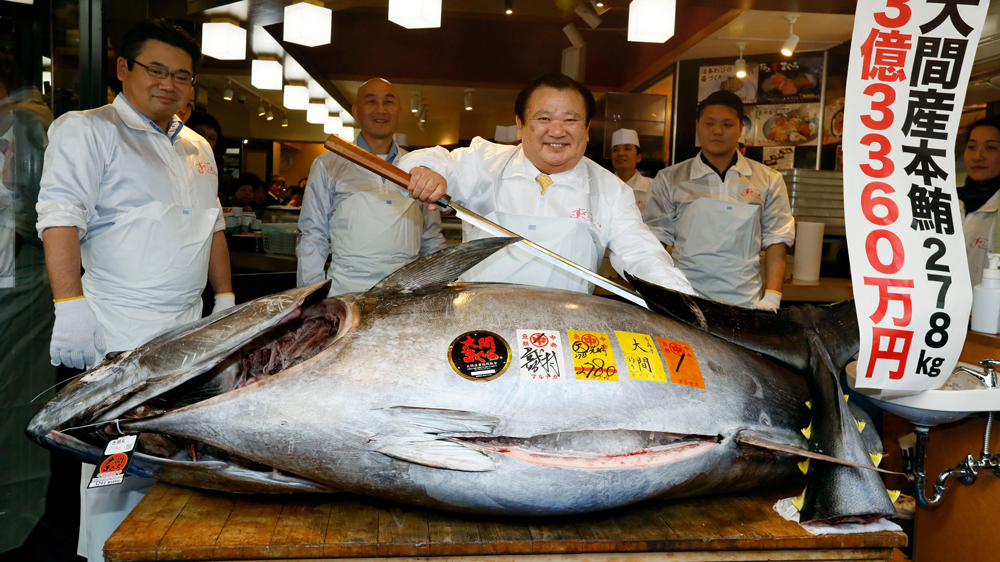 The king has regained his throne: For seven straight years, Japan’s self-proclaimed “King of Tuna” had ruled over the first tuna auction of the new year in Tokyo. But in 2018, Kiyoshi Kimura, the president of the Japanese sushi chain Sushi Zanmai came up short. Hiroshi Onodera, owner of the luxe Sushi Ginza Onodera chain, paid $323,195 for a 893-pound Pacific bluefin tuna, beating Kimura at his own game. The king would not accept defeat again.

“It’s a good tuna, but I think I paid too much,” Kimura joked to reporters after placing the winning bid.

Paying too much for a bluefin at the first predawn auction of the year has become a tradition in Tokyo. For 83 years, auctions happened at the legendary Tsukiji fish market; this year, the auction had a new home. To make room for the 2020 Olympics coming to town, Tsukiji was shuttered in October. The fish market was moved to the brand-new, $5.3 billion Toyosu market, and the auction tradition endured at the new location.

After the morning’s festivities, Kimura brought the giant fish to the flagship Sushi Zanmai location near where the old Tsukiji market used to be. Staff at the restaurant broke down the bluefin and served the rarest parts to the assembled crowd.

Of course, bluefin going for such a high price isn’t all great news. Its value has led the fish to become overfished in recent years, with countries exceeding their catch limits. Right now, the population of bluefin tuna is down to just 2.6 percent of what it used to be, according to a recent report. Hopefully measures can be taken by governments and fishery managers to ensure the future of bluefin tuna and the lavish annual auction in Tokyo.