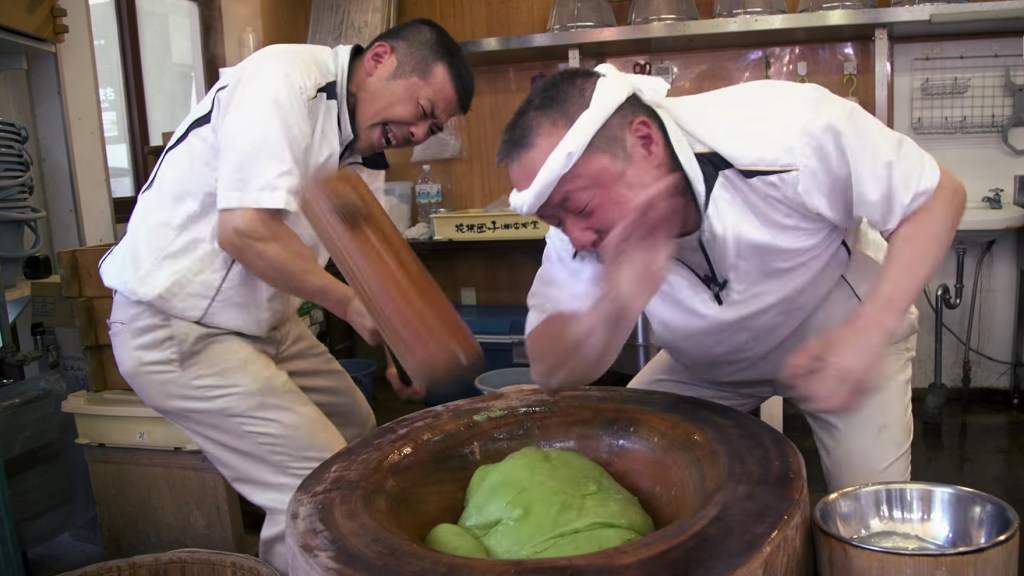 When a chef says they put their blood, sweat, and tears into their work, we hope they don’t mean literally. Mochi masters may actually mean it literally. To create the sweet, chewy Japanese delicacy, hammer-wielding artisans pound glutinous rice into submission, exerting themselves in a brutal ballet that’s beautiful to watch.

Making mochi begins with rinsing and soaking overnight a very sticky rice varietal called mochigome in Japan. The next day the rice is steamed and while still warm it’s put into a large wooden mortar to take its beating.

This is where the skill really comes in. The documentary film company Great Big Story, visited Mitsuo Nakatani, a master in Nara, Japan, who is one of the world’s fastest mochi makers. Using the mochitsuki method, two people work on pounding the mass at the same time. For part of the process, both will have hammers, but the most dangerous portion is when one swings the mallet and the other kneads the blob on the upswing, moving his hands just in time to not be crushed on the downward strike. The whole time they’re shouting, not just because they’re exerting themselves, but because it’s part of creating a rhythm between the two masters that helps coordinate their movements.

“The key to be good at mixing is all about timing and trust in the guy that’s pounding,” says Nakatani, who has been creating mochi for 25 years. That’s especially true when Nakatani is working, because they strike the mochi three times per second, making their process pass by almost in a blur. Each pounding session is like a sprint, and Nakatani wears a headband to catch the sweat. “To me, making mochi is like a battle,” he says.

But it’s not just making them that can be dangerous. Earlier this year the BBC published a story headlined “Delicious but Deadly Mochi: The Japanese Rice Cakes That Kill.” Two people had died from choking on mochi during New Year’s celebrations because all that pounding makes them devilishly chewy. This came after nine people passed from mochi-related suffocation during New Year’s parties in 2015. The advice experts give to prevent untimely demise? Chew carefully and thoroughly, friends.