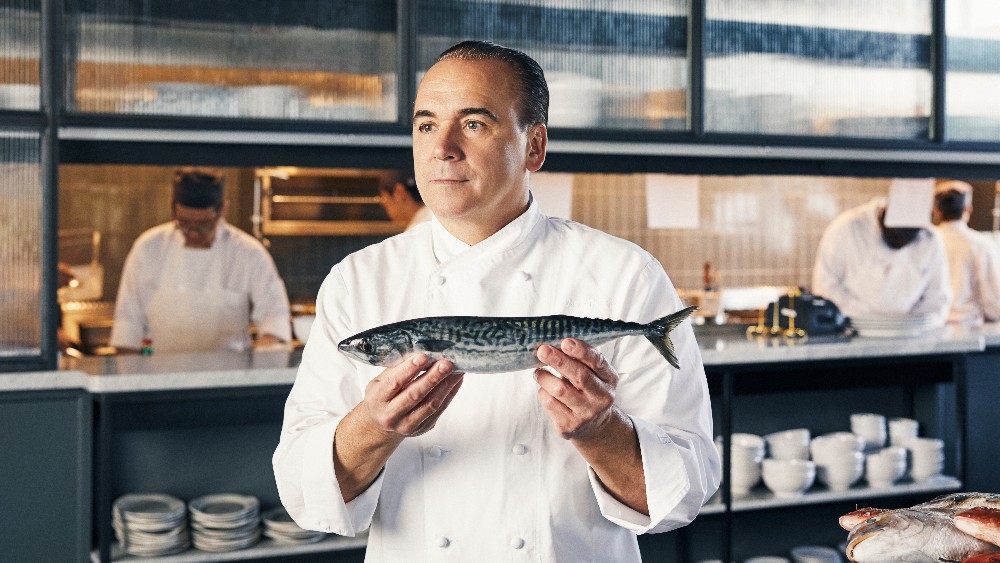 Would you go out of your way to eat dinner at John F. Kennedy International Airport, or South Street Seaport? Thanks to Jean-Georges Vongerichten, you might want to, as the prolific, Michelin-starred chef is making a play to re-energize both spaces.

This week, Vongerichten opened Fulton, a Lower Manhattan seafood restaurant, as well as The Paris Cafe, an all-day restaurant in the architectural marvel that is JFK’s former TWA terminal—now the brand new, 512-room Hotel TWA.

Fulton, located on Pier 17 in the Seaport district, is the chef’s first fish-focused spot. Selling seafood by the Seaport hearkens back to Vongerichten’s memories of visiting the nearby Fulton Fish Market (which is now in Hunt’s Point) for the very first time in 1986, when he was just starting out at Lafayette in the Drake Swissôtel.

Fulton’s menu is highlighted by the raw bar (including oysters and a seafood plateau), plus an extensive selection of crudos. There’s fish stew, crispy soft shell crabs, fish and chips, and roasted monkfish. Black sea bass is available both as a regular entree and served whole for two. There’s also a “simply cooked” option, with seven different seafood entree choices, plus beef tenderloin.

The Paris Cafe at the Hotel TWA takes its name not from Vongerichten (he’s from Strasbourg), but from the restaurant that had previously been in the terminal during its heyday (the same is true of an adjoining bar, the Lisbon Lounge). For culinary inspiration, the chef consulted actual Trans-World Airlines in-flight menus (the airline’s “Royal Ambassador” menu, for instance, included caviar, port with cheese, and Chateaubriand). Still, as Eater NY’s Carla Vianna noted, it’s ultimately a hotel restaurant—more casual, and run day-to-day by JFK vendor Tastes on the Fly, not the Jean-Georges group.

The big draw is the hotel in general. The 1962 Eero Saarinen-designed TWA Flight Center had been closed since 2001 (though it was used in the 2002 Leonardo DiCaprio/Tom Hanks movie Catch Me If You Can). Whether you’re flying, staying overnight, both, or neither, the hotel’s public areas offer runway views and access to JetBlue Terminal 5.

In addition to the Paris Cafe and Lisbon Lounge, there is a food hall and multiple cocktail bars: The Sunken Lounge, Connie Airplane (“Connie,” being an actual Lockheed-Martin Constellation) and The Pool Bar, which is outdoor and year-round (with a heated “pool-cuzzi” in the winter). The TWA also claims to have the world’s largest hotel gym (10,000 square feet). Hardcore travelers—or hardcore hedonists—can also rent rooms in four-hour blocks.