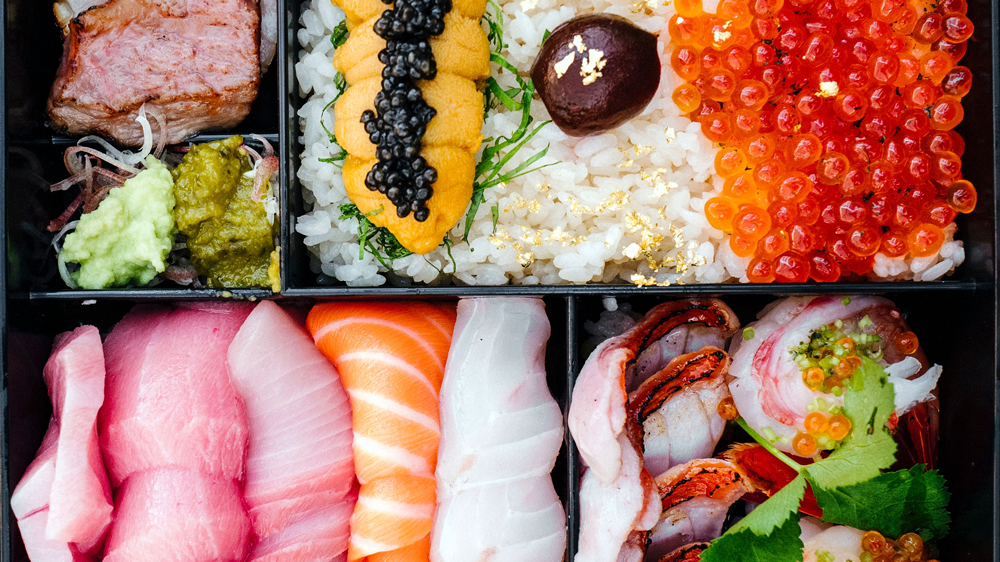 In April, Los Angeles fishmonger-chef Liwei Liao started making dry-aged chirashi boxes on the down-low. Liao, who runs The Joint, a seafood market and coffee bar in Sherman Oaks, created the boxes with an assortment of sushi-grade raw fish alongside warm rice to give himself and his staff a creative outlet during the pandemic.

He did it discreetly because he didn’t want to disrupt his busy fish market. The elaborate chirashi boxes were only available on occasional Mondays, when The Joint is closed. Liao only posted about it on his personal Instagram stories, knowing that the posts disappeared after 24 hours and that most people who saw them were friends. He called it “backdoor chirashi” because he kept The Joint’s front door locked and chirashi buyers (including a prominent actress who plays one of the Avengers) came in through the back-alley entrance.

Another reason Liao kept things quiet is because The Joint is on Ventura Boulevard, which has no shortage of great sushi bars. Liao respects those restaurants and wasn’t trying to step in their lane.

“I wanted to disconnect the chirashi from The Joint,” he said. “The last thing I wanted to associate The Joint with was Japanese cuisine.”

But thanks to social media and word-of-mouth, Liao’s chirashi has become a coveted LA sensation. He started with 18 boxes for his first run, which he refers to as Chirashi 1.0. He immediately had demand, so he stepped things up to 25 boxes and then 50 boxes. Pre-orders came in rapidly, whether he was selling $150 boxes or loading $230 boxes with ultra-premium nodoguro (blackthroat seaperch).

So Liao went fully public for his $200 Chirashi 5.0 in September and posted about it on The Joint’s Instagram account. He’s now letting customers enter through the front door. He’s getting ready for his $200 Chirashi 6.0 on October 19. And after seeing the momentum build, he’s planning to have $400 boxes for the holidays in November or December. He’s also thinking about what he could put into a box that he might sell for $1,000 or more.

When Liao makes chirashi, one goal is “smashing all other bento boxes in weight” while also ensuring that every bite stands out. His boxes are meant for sharing, and the seafood inside is equivalent to more than 30 pieces of nigiri at a sushi bar.

“I’m trying to fill the box as classy as possible without fillers,” Liao said. “I kind of get mad when I experience something and there’s no purpose to that thing on a plate. A lot of boxes seem to have leaves to fill things in. Or let’s put a wad of finely strained daikon just to fill that corner. I don’t have leaves. I don’t have bamboo. I don’t have any of that. Let’s just make perfect slices in perfect rows.”

There are usually four slices of at least five different kinds of fish with distinct characteristics, such as San Clemente maguro chu-toro, Baja kampachi and New Zealand Ōra king salmon.

“There’s whitefish, the jacks, the salmon, the tunas,” Liao said. “By design, if you were to sit down for a proper omakase, the fish you’re going to eat will go from lean to fat to sweet to tender. At least one component is aburi, which is seared or charred or half crispy or half raw.”

In Chirashi 5.0, Liao also included smoked scallops with wagyu; spot prawns with smoked trout roe; ikura with wasabi olive oil; and uni with Tsar Nicoulai caviar. Every box Liao puts together has multiple bites of each element, except for a tiny “mystery fruit” that’s a pitted wakomomo (Japanese baby peach) marinated in hibiscus tea. That’s there for a bit of fun and intrigue.

All of the fish in 5.0 was dry-aged for seven to 14 days. Even the spot prawns were dry-aged for three days. Liao likes to say that “fresh is boring” and that dry-aging is about finding “the best time to serve a fish.”

Aging seafood in a dry environment removes blood, slime and fishiness. It breaks down connective tissues. It makes fish more flavorful and tender.

“The very ironic thing is, the fresher the fish is and the better condition the fish is, the longer I can age it,” Liao said. “If I can get the fish super fast and it really stands out, I know that I can not touch it for 21 days and it will just be that much better.”

Because a fish loses moisture when it ages, it becomes lighter. So each slice of dry-aged fish is more valuable than a slice of the same fish when it’s fresh.

Liao doesn’t want to sell pre-sliced chirashi. When he has 50 boxes, he builds them in waves of eight to 10. The fish is sliced and goes into a box within 10 minutes. Liao also cooks rice in four different batches to ensure that it’s at the proper temperature.

“Beyond the pure quality of it, the amount of time and effort he puts into each box is incredible,” said Adrian Bustamante, a Studio City-based actor who’s enjoyed Liao’s chirashi three times. “You see him and a couple guys slicing all the fish. It’s just a cool little experience, getting to know the person who’s doing each box. And you get so much food.”

Liao is now considering ways to make his chirashi even more over-the-top.

“I think $400 is very realistic,” Liao says of the boxes he wants to sell for the holidays. “I want to use Japanese langoustines. I want to use even more nodoguro. There’s super-high-grade kinmedai and so many more fish we can try.”

When you learn that nodoguro wholesales for between $45 and $75 a pound, and that sushi bars can charge $20 for a single slice of this prized fish, you realize that Liao’s chirashi is simultaneously about extravagance and value.

When he eventually makes his most expensive box, there will be a good chance that he won’t turn a profit on it. This, remember, is a creative endeavor.

“If I were to do one crazy box, I could do one that’s over a grand,” Liao said. “I think there’s a buyer for it already too. I want to do one just to do one. I could put in Taiwanese bottarga and crazy caviar and crazy foie gras and even more exotic items. At that point, it’s not about making money or breaking even. This isn’t go big or go home. You don’t go home. You just go big and keep going.”