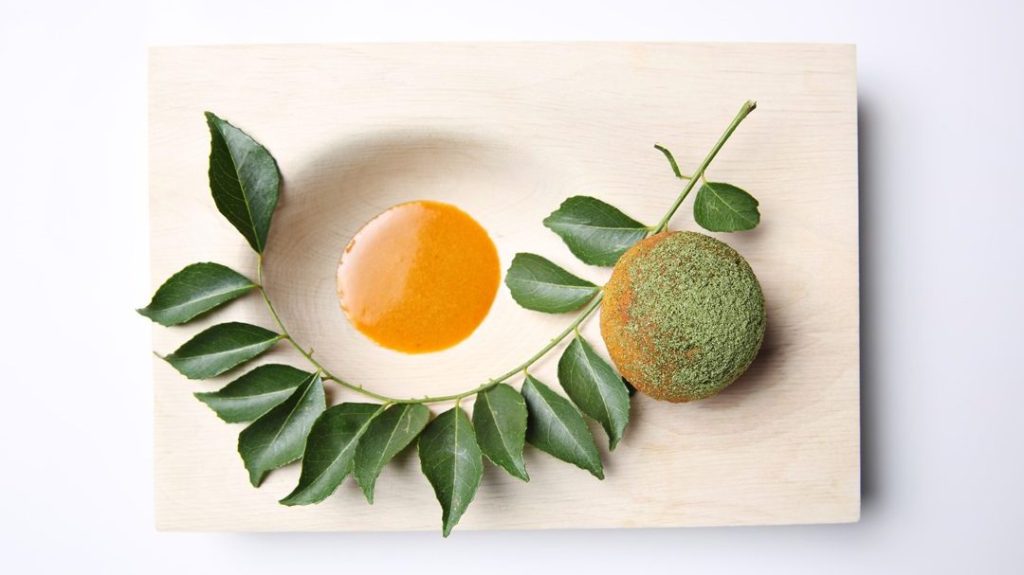 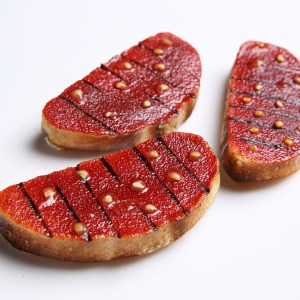 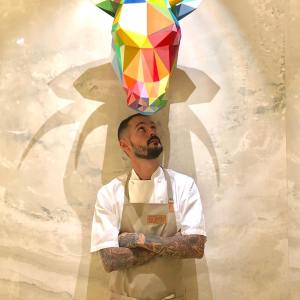 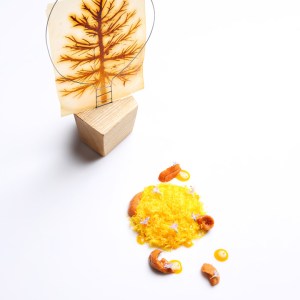 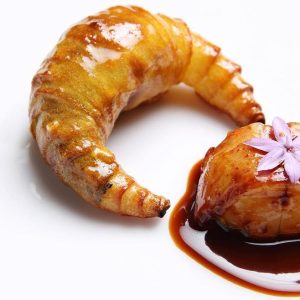 Stepping into the future space of José Andrés and Aitor Zabala’s new restaurant, Somni, is like walking into a different world. To arrive in this 10-seat restaurant within a restaurant, you pass through Andrés’s Bazaar, which is outfitted with whimsical furnishings and colored lights, creating a dark, decadent, and eclectic space. The contrast from Bazaar when you enter Somni is stark—a bright room is decked out from head to toe in pale oak, intercut with slabs of white marble on opposing walls, and accented with brilliant pops of color from a rainbow-hued trio of animal heads by Spanish artist Okuda San Miguel.

“This is a very different experience with different people,” Zabala says. “Bazaar is more crowded, playful—it’s Spanish tapas with friends.” Somni—which means dream in Catalan—will feature a 20-course tasting menu, prepared and served inside this ethereal space in front of diners by a team of chefs led by Zabala every night. The ambitious restaurant will draw on a range of influence, from the avant-garde Spanish master Ferran Adrià of El Bulli, to the traditional Barcelona fare that Zabala grew up on.

Together, Zabala and Andrés have been planning Somni since 2015 as a replacement to Saam, the hidden, 40-seat tasting-menu restaurant that opened in 2009 inside the Bazaar. They wanted to pare down the Saam experience to create a deeper connection between the chefs and diners. The project is a culmination of Zabala and Andrés’s nearly decade-long collaboration that began after a chance meeting in Spain.

Zabala was working at El Bulli when Andrés visited with Anthony Bourdain, and the two met for the first time. But back then, Zabala was feeling restless. He was developing dishes in El Bulli’s food lab, but he had recently broken up with his girlfriend and wanted to get out of Catalonia. Adrià suggested he talk to Andrés, and Jose had him visit America. However, Washington, D.C., didn’t make the greatest impression. “I headed back to Spain, and I said, ‘I’ll never go back to the United States,’” Zabala says. “I don’t like it.”

When his new girlfriend, who was also a chef, took a job in America, it got him to return. Eventually he’d reconnect with Andrés, and he would help the chef open the two-Michelin-starred Minibar as well as other restaurants under Andrés’s company, ThinkFoodGroup, of which Zabala would become creative director. After a while, Zabala moved to Los Angeles to lead Saam, and he fell in love with the city.

As he prepares to open Somni, the latest in a crop of ambitious fine-dining restaurants popping up across L.A. from Dialogue to Vespertine, we sat down with Zabala inside the space. Around us, construction workers put the finishing touches on the room, and his team of cooks swarmed the kitchen, preparing for opening night on March 9. Zabala excitedly detailed what diners can expect from his dream restaurant.

A Playful Merging of Modern and Traditional
When Zabala was young, his mother was a chef with a restaurant in Barcelona, serving food of the Basque region where his family had originally hailed. But his mother didn’t want him near the kitchen. “Spaniards, we have two things—we are too passionate, and we have really hard heads,” Zabala says, tapping his knuckles to his skull with a laugh. “They say no, so you want to say yes.”

After stints in the army and working on motorcycles, he eventually said yes to being a chef. He cooked in Michelin-starred kitchens, but it was working for Adria that changed the way he thought about food, getting him to challenge the traditional methods he had learned.

Throughout the menu at Somni, he’ll deploy both traditional and modern cuisine. One dish will be a play on a Spanish dish called suquet, a stew made with lobster and potatoes. But instead of a stew, he makes potatoes so that he can roll them out in a sheet like puff pastry and then shape it to look like a croissant. He serves that alongside a medallion of lobster topped with a sauce, just like you’d get in the stew. “We’re playing with texture; we’re playing with how it looks for modernity, but we keep the sauce very traditional,” Zabala says. “Tradition is so important, but modernity can give you another vision, another look. Could it be better? Sometimes the original is better, but I tried to provoke you with something, show you something different.”

The First Menu Is 85 Percent Complete
For the opening, the overall menu is largely ready to go, minus minor tweaks and deciding which plates to use as he prepares for March 9. But how the menu will look night to night is far from static. Zabala will constantly experiment with dishes based on seasonal ingredients available to him, rotating in recipes he prepares himself to gauge how diners react. If a 6pm seating takes to a new dish he’s trying, he’ll consider adopting it for the full menu.

When creating those dishes, Zabala won’t be doctrinaire about being local. The restaurant will use many purveyors from Southern California, but Zabala says they’ll go around the world to import the best possible product if they feel that’s what the menu needs.

The Design Includes Bulletproof Counters and Lights for Your Instagram
Zabala was heavily involved in the restaurant’s design, which is still getting tweaks (hence us not being allowed to photograph the full space yet). The team made a conscious decision to outfit the room with natural materials instead of stainless steel to make it more inviting. “We wanted it to feel organic,” Zabala says. So the chefs will work atop a stone surface in front of the guests instead of metal counters. That means they needed a durable enough surface for the punishment two services a night will dole out on it. With marble too prone to chip, they’ve gone with an engineered material called silestone, where quartz is ground down, mixed with other stone, and then compressed to make a countertop they claim is bulletproof.

Another design detail that’s perfect for the Instagram age comes from Zabala’s conscious decision to give every diner their own light. This means that when a plate is presented, a spotlight above each place setting will allow you to take the perfect Instagram pic of the beautiful dish you’re about to eat.

An Acting Coach Will Help Train the Cooks
In the intimate space, diners will watch chefs prepare their dishes a stone’s throw away, putting them onstage for the guests. Management figured, why not have an actor come in and help the crew with their stage presence?

“We don’t want to sound too ‘artistic,’ you know?” Zabala says. “But we want to be happy, interactive, talking, and creating a dialogue. It may be controversial when I say it, but I don’t expect the people are coming here to only eat. We’re solid in our food, and we believe in our food, but we want to create an experience.”

The acting coach is just one way the chefs are preparing for opening service. The staff’s training on the day I walked through looked pretty intensive. They went from one meeting to the next, including sessions on subjects as minor as the proper cleaner they should use for the custom surfaces the contractors were installing.

The Details
The restaurant’s first night of service will be on March 9, and tickets went on sale last week for $235 per person via Tock. The restaurant is open Tuesday through Saturday, with 6 and 8:30pm seatings each night for the 20-course tasting menu, which will last around 2 hours.