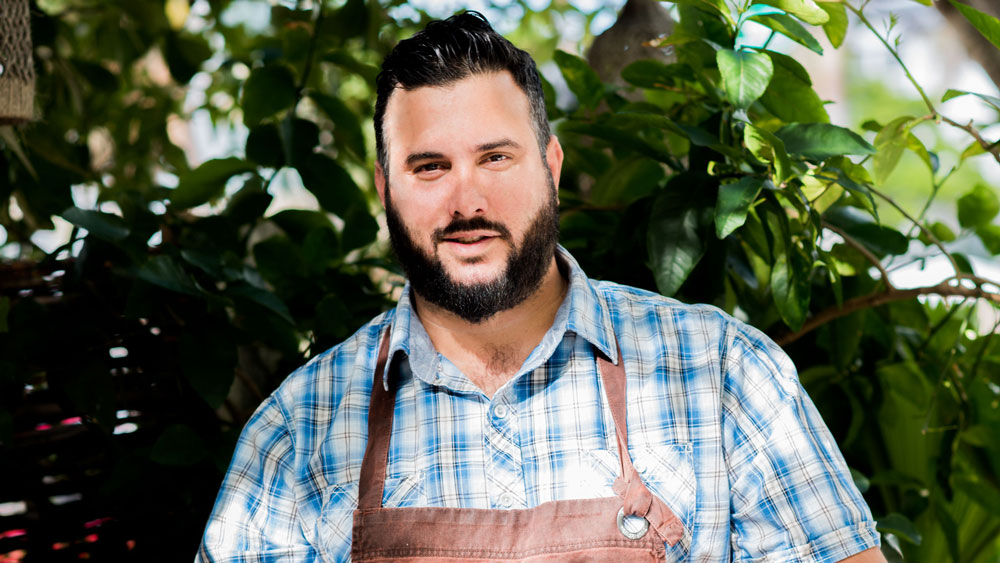 The call to venture forth into the world is more emphatic for some than others. For José Mendín, that call was unambiguously loud, beckoning him to culinary school at Johnson & Wales University in Miami. After graduation, the Puerto Rico-born chef became part of the opening team for Nobu Matsuhisa’s first outpost in the Magic City. Working at first Nobu Miami, and then Nobu London, forever shaped his vision for the cuisine he wanted to create.

“Nobu opened my mind and made me look at food in a different way,” says Mendín. “The combination of flavors isn’t a forced fusion. It’s more of a blend of cultures that have already been happening like Japanese and Peru, Portuguese and Brazil, and European techniques blending into Latin cuisine. From there, I was able to create my own style.”

Over the years, the 39-year-old chef has made quite the splash in Miami with his collection of restaurants that serve innovative twists on Asian, Latin, and Spanish cuisine. The chef/restauranteur is also a founding member of the Pubbelly Group, and more recently, the Food Comma Hospitality Group, which manages some of their comfort food staples like Pubbelly Noodle Bar, the Baja Bao food truck concept, and Pubbelly Sushi—to name a few.

Growing up in Puerto Rico, Mendín received an early appreciation for cuisine thanks to the efforts of his parents and grandmother. He was surrounded by traditional dishes packed with herbs and spices, which would impact his palate and his sense of comfort food in the years to come. And though the sacred sanctuary (a.k.a. the kitchen) was off-limits as a child, Mendín continued to learn through the powers of observation and taste. Only after leaving home would he begin to experiment in the kitchen and come to find that cooking for people, witnessing their joy at what he was creating, was immensely gratifying.

After a couple years at Nobu, Mendín’s passion for food and flavor would take him on a journey around the world, and in 2003 he made a pit stop in Spain. Working under the tutelage of such notable chefs as Jesus Ramiro and Juan Pablo de Felipe of Madrid’s critically acclaimed El Chaflán, he was pushed out of his comfort zone and exposed to a range of European and Michelin techniques.

“More than anything, my cooking is a reflection of everything I have done and everything I have learned in my career,” he says. “I try to put all of that into creating a dish.” The result? The incredibly successful Pubbelly Noodle Bar, where the menu ranges from corn soup agnolotti dim sum in a short rib broth topped with truffle bubbles; pork belly bao with butterscotch miso and corn powder; and an innovative udon Bolognese with veal, kimchee, chilies, and ojinguchae—quite the powerhouse of flavors.

“Once you have an ingredient, you want to cook it the best way possible. From there you pair it with different flavors and try to make the dish as flavorful as possible. It’s not just about putting a dish out there that is conceptual, for me it has to be tasty. Otherwise, it doesn’t work.”

Flash-forward to 2017 and Mendín has showed Miami what’s up. His restaurants are some of the best in town and he’s become a five-time semi-finalist for “Best Chef South” by the James Beard Foundation. It’s no wonder that 1 Hotel South Beach wanted him to open a restaurant in their hotel, which will also host Robb Report’s Health & Wellness weekend March 15-18, 2018 where chef Mendín will create the lunch menu.

In collaboration with the luxury property, Mendín and his team opened Habitat. The upscale dining venue is a picture of exposed wood, gold and copper accents, and delightful pops of color. It is both luxurious and charming. “When I make a restaurant, I blend it well with the hotel and Habitat feels like a part of the hotel,” he says. “We play with the elements on the menu: fire, water, and land. We have a huge wood-fire grill and raw seafood bar. It’s a big restaurant, bigger than any restaurant that we have at 220 seats.”

With a menu built on fresh ingredients and dashes of molecular gastronomy, Mendín—currently serving as the executive chef—does what he does best by infusing his dishes with pops of Asian, Latin, and Spanish flavors. The tender filet mignon gets a spicy tobanjan glaze with sesame, while the steak tartare and bone marrow is paired with caper berries, puntillas, egg yolk, and yuzu Dijon. As for the signature dish, chef recommends the ever-popular Hamachi Aguachiles, which also happens to be the first dish he created for the menu. “We began with the raw bar and from there came the Hamachi Aguachiles. We make a broth out of watermelon and white soy with guajillo peppers, which blends really well with the fish.”

Habitat also features an extensive tasting menu, seasonal dishes, and a live greens cart that roves around the restaurant serving gourmet salads. The dessert menu is not to be missed, where pastry chef Maria Orantes wows with her bread pudding—sweet potato “pie” custard, caramelized miso, chai tea ice cream, and black sesame. Or for something on the lighter side go for the Barba-Papa. This refreshing sweet treat is a combination of coconut, ginger, fennel, and pineapple sorbet for a light-as-a-feather bite that is slightly tangy. The venue’s second floor lounge is ideal for tapas and craft cocktails, while the sprawling outdoor patio is furnished with a vintage trailer where cafecitos are served beneath a sea of twinkling lights.

It is an environment designed for guests to sit back, order a few cocktails, try out the tasting menu, and sip on an espresso way into the wee hours of the night. “We really want to make people happy and take care of everyone at all levels,” says Mendín about Habitat. “It’s a fun place to be.”