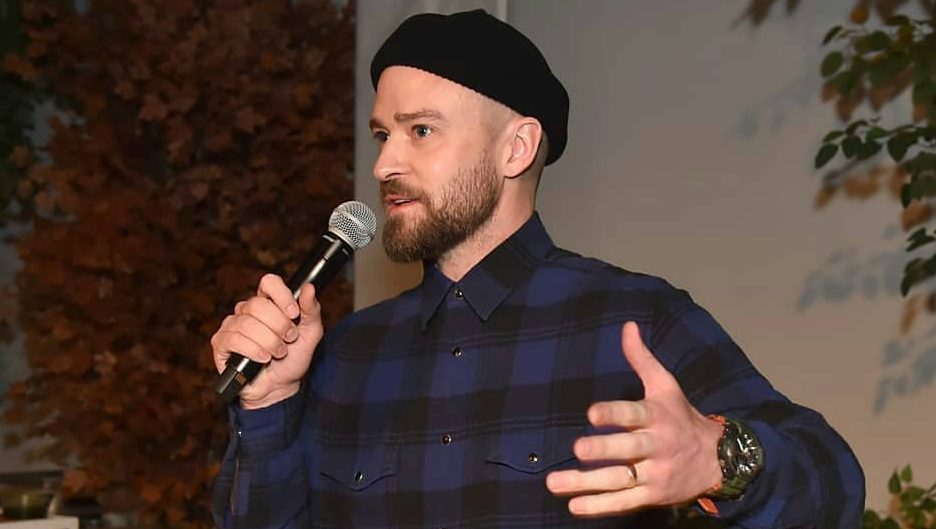 With Justin Timberlake’s new album we’re seeing a new side of the former Mouseketeer. On Man of the Woods the popstar pares down the production a bit, leaning a little more on acoustic guitar than drum machines. But it’s not just the music that is a bit earthier now. Timberlake has traded in his fedora and vest for flannel, a shearling coat, distressed leather, a wool cap, faded jeans, and all other manner of urban lumberjack aesthetics. The food he served at his Man of the Woods listening party followed suit, whether the guests were ready or not.

The full album won’t be available until February 2, right before Timberlake performs tracks from it at the Super Bowl Halftime show, but last night at a party in Tribeca, he played Man of the Woods in full for the first time in public. Revelers at the exclusive gathering were treated to Timberlake’s introduction, the album playing from start to finish, his wife Jessica Biel dancing along, and the team from Noma serving them ants and grasshoppers.

Noma, which is preparing to reopen as a transformed restaurant, has been a leader in a back-to-nature style of cuisine and aesthetics. The foraged ingredients, austere design, and earthenware dishes have greatly influenced a generation of restaurants. And it’s not just a signature dish that is emblematic of Noma. It’s more about Rene Redzepi’s approach. When he goes to Tulum or Japan to do a pop-up version of his restaurant, the food will be different, but the method of developing the menu stays the same—he tries to connect the food to the region surrounding the restaurant. When viewed as such, it makes sense that Timberlake, who has said he wants to make an album tied to his familial roots in Tennessee and “getting back to nature,” would want to serve a meal by a restaurant that’s so in tune with a sense of place.

However, Noma didn’t quite give Timberlake the full Noma treatment. Rene Redzepi’s crew wasn’t camped out in Tennessee for six months researching its food for the party’s menu. The dishes were still plenty earthy though. The menu included ants with black garlic and rose oil; a sea urchin and kelp pie; black truffle flatbread; and a Danish pancake with grasshopper. Music fans who may not be familiar with one of the world’s best restaurants, struggled to wrap their mind around the experience. According to an account by Variety, “As the evening wound down, wait staff could be heard explaining the menu items to attendees, one of them saying patiently, ‘Yes, ants.’”

For those disappointed with the food, they were safe in the knowledge that the McDonald’s a few blocks away is open 24 hours.

When you go to a @justintimberlake @americanexpress #amexcenturion #amexmusic album party and it just happens to be catered by @nomacph. This is literally the best thing that has ever happened to you in your life. EVER. like winning the lottery. So you have no choice but to eat 6 uni and kelp pies and an equal volume by of black truffle flatbread because the minions filling the room are there to mingle with celebrities like a kid from Stranger Things and Shoshi, drink cheap prosecco and don’t eat 🐜. #mylifeiscomplete #worlds50best #oadtop100 #foodgawker #foodspotting #nyceats #eatnyc #traveleatnyc #nycfood #seriouseats #infatuationnyc #eatingnyc #eatingnewyork #timeoutnewyork #grubstreet #lefooding #gastronogram #gastropost #foodandwine #cntravelereats #buzzfeedfood #eater #spoonfeed #saveur #gourmande