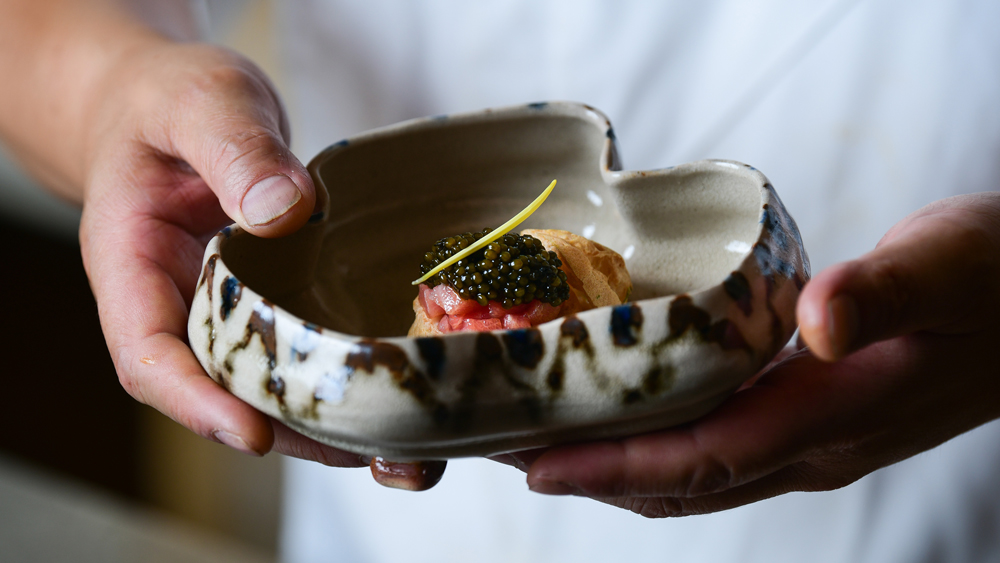 For nearly a decade, chef Isao Yamada presided over David Bouley’s celebrated kaiseki restaurant Brushstroke, before a hefty rent increase caused the Tribeca restaurant to close in 2018. The chef has now returned, opening Kaiseki Room by Yamada, a 20-seat restaurant with 12 of them located at the counter, that will serve an 11-course menu driven by classic Japanese technique, the seasons and local ingredients as well.

The tasting menu will include Japanese delicacies like toro tartar, Hokkaido uni and the rare and ultra-unctuous olive Wagyu. Yamada will serve the $300 per person menu inside an intimate room designed by Julien Legeard of the Prestige Group, which is defined by Pierre Renart’s pale, undulating woodwork.

Yamada first arrived in New York in 2006 after Bouley convinced him to leave Japan to work with him. Before that, Yamada had his own restaurant in his hometown of Fukuoka, opened after he had studied kaiseki in the cuisine’s ancestral home of Kyoto, working for Michelin three-star Kitcho.

Kaiseki grew out of Tokyo’s red light district as well as 16th century Buddhist tea ceremonies in Kyoto. Tea houses and inns began serving multi-coursed meals to travelers visiting the Kyoto shrines. “In the medieval period, you’d have warriors being served multiple trays of food all simultaneously. What the tea ceremony does is it just takes one or two of those trays and simplifies the meal,” says Eric Rath, a University of Kansas history professor who focuses on Japanese food culture. “The kaiseki version which you find in restaurants, instead of serving all the food at once, it’ll present those foods sequentially.”

Kaiseki expresses the seasons through the food on the tasting menu, preparing an ingredient in a way that will optimize it, based on the flavor it presents that day. And the progression of the menu is very important, and influential on fine dining as a whole. At Kaiseki Room by Yamada, the chef is hoping to deepen New Yorkers’ appreciation of this old culinary art form.