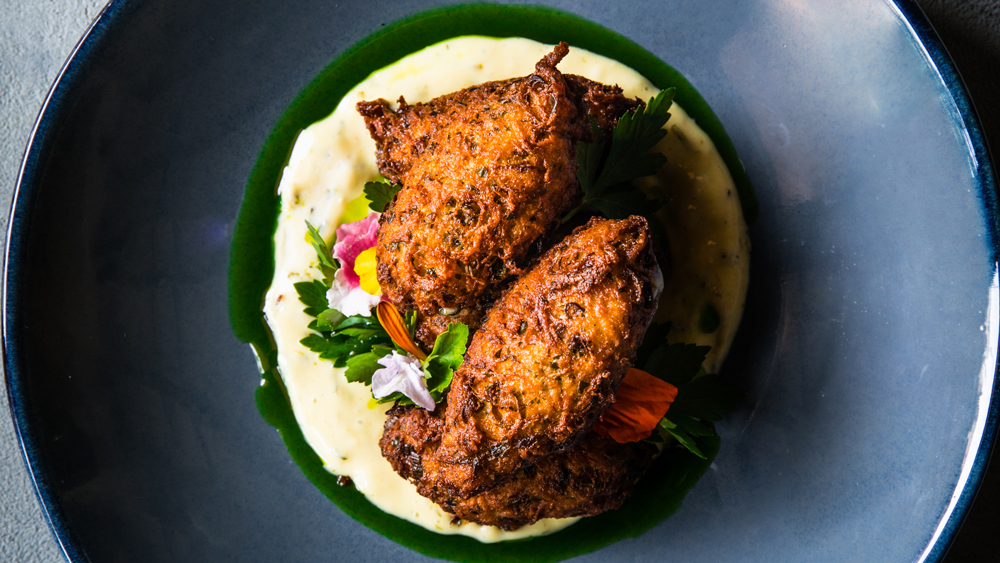 Chef Gregory Gourdet wants to tell you a story. It has many beginnings, though.

One of those beginnings was 40 years ago, when Gourdet spent his childhood between New York, where he was born, and Haiti, where his ancestors are from. He snacked on sugar cane (kann) bought from street vendors while taking in all the spices and comforting dishes of his family’s kitchen.

Another one of those beginnings was more than 500 years ago, when Christopher Columbus and the Spaniards anchored to that same land and learned a new way to cook seafood and meat, the way the indigenous peoples did, over a barbecue. This, according to scholars, could have been what spread the art of barbecuing throughout the world.

And yet another one of those beginnings was in 2020, when Gourdet appeared on Bravo’s Top Chef: All-Stars Season 17 and won the show’s “Restaurant Wars” challenge with his vision for a wood-fired Haitian restaurant.

And while the story begins in a lot of places, it only has one logical ending. On Aug. 4, Gourdet will open Kann, in Portland, Ore., the wood-fired Haitian restaurant of his dreams, his first solo project.

Before launching Kann, Gourdet, a James Beard Award winner and alum of Jean-Georges Vongerichten’s New York empire, had been at Portland’s Departure for years, “happy for a long time,” he said. “And then one day I woke up and didn’t want to go to work. And I just decided it was time for a change. I believe in making the changes you need to be happy.”

His exit plan was the restaurant that would eventually become Kann, a place where he could have complete control and refocus on the kind of cooking he really wanted to do—Haitian, the cuisine of his family, while honoring the ingredients of Oregon, the food of the place he had called home since 2008.

This was 2018, though, so the endeavor hit a very large roadblock a few years later. Instead of trashing his dream, he traveled to New York City and LA and explored the Caribbean communities there. Then he did pop-ups around Portland, including an outdoor “yurt” village, narrowing in on the flavors and techniques he would eventually bring to Kann.

He also spent this time reflecting on the opportunities he had been given in his career and clarifying his core values. Diversity is important. Women should have leadership positions. (His chef de cuisine at Kann is Varanya Geyoonsawat, a native of Thailand who worked with him at Departure.) Everyone on the team should have a voice.

“When I look at what makes a great restaurant, it’s not just about a beautiful dining room and great food,” he said. “It’s about the entire holistic experience. Is the team happy that works there?

The restaurant he built reflects this ethos. He brought in a Haitian scholar to educate his staff on the country’s  history and culture. Physically, there are no walls between the 80 seats in the dining room and the wood-fired kitchen; everyone in the building is in this together. An eight-foot hearth is the centerpiece, an island, with a 13-seat chef’s counter.

The menu at Kann includes traditional dishes like Diri ak Sos Pwa (jasmine rice with red kidney bean sauce) and Griyo (twice-cooked pork) that are eaten in Haiti and the Haitian diaspora every day. Other dishes are rooted in the Pacific Northwest.

“A lot of it is tapping into our resources in Oregon and presenting those ingredients—be it summer tomatoes or local berries—in a Haitian/Caribbean light,” he said.

Other dishes take full advantage of the hearth. He’s chopping up tomatoes and smoked herring (a popular breakfast item in Haiti) and serving them over charred red cabbage with an African pepper sauce spiked with ginger and Scotch bonnets. He’s grilling whole fish with citrus, herbs and chiles. He’s smoking beef ribs rubbed in Haitian coffee. And he’s even making Pekin duck (one of his specialties with a cult following) by smearing it in cane syrup and dotting it with pineapple and tamarind hunks.

You probably wouldn’t notice this unless someone told you, but the entire menu is dairy- and gluten-free, the way Gourdet likes to eat. And there is a long list of zero-proof cocktails available for those who avoid alcohol like Gourdet does.

His goal is to build a global dining destination, one where people from all over the world will travel to experience the bounty of Oregon and also learn about the beauty of Haiti.

“I really want to take this opportunity to do something for my city and for the country, the culture where I’m from,” he said. “We want to add to the fabric of American dining.”