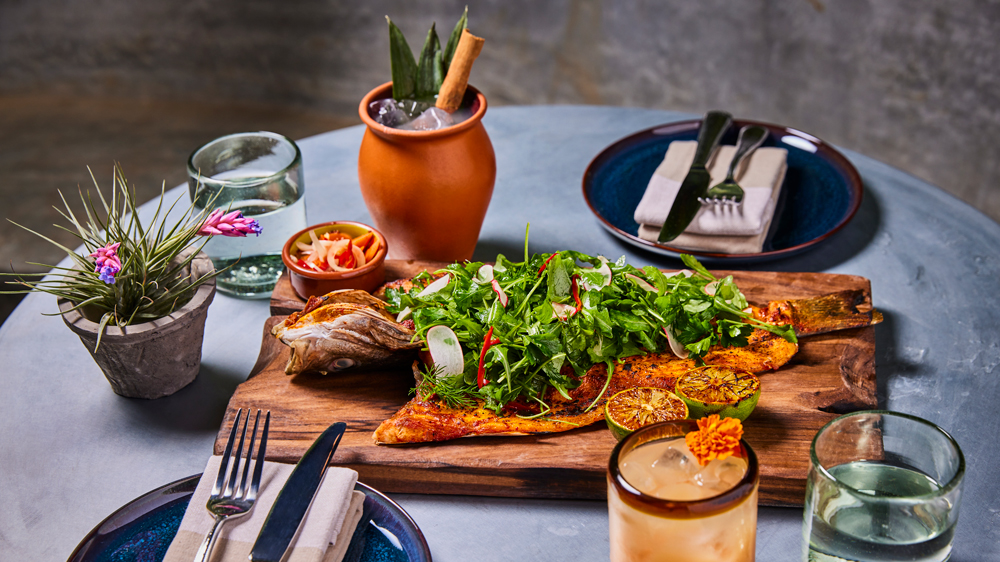 When Wes Avila—the chef behind LA’s iconic Guerrilla Tacos—was growing up, he and his family would take weekend trips down the Pacific Coast to Ensenada in Baja. At mealtimes, his mom, brother and sister were picky; they only wanted carne asada tacos. So after dropping them off at a taqueria, Wes and his dad, who grew up in Mexico, would explore.

“We’d go to the street carts that specialized in seafood, and me and my dad ate it all,” Avila said. “Rock shrimp, aguachile, blood clams, big spider crabs that looked like aliens, chocolate clams, lobster omelets … you name it. All this really fun stuff. It gave me an excuse to have bonding time with my dad and experience delicious food.”

Now Avila, whose unique take on California street food caught the attention of Jonathan Gold and eventually the Michelin Guide, is bringing the experience of eating Mexican food beachside to Hollywood. Ka’teen, his new restaurant inside the Tommie hotel, opens Saturday, Dec. 11.

“It started off as a Tulum-inspired restaurant,” he said. “It has the Yucatan feel, the vibe, the ambiance. The cuisine itself is more Mexican coastal; you go from the Gulf of Mexico to the Caribbean Sea all the way to the Pacific. We’re showcasing those styles of cooking and those ingredients and I do it with an LA twist.”

Avila says he’s most excited for the sharable, family-style aspect of a lot of the entrees, like the banana leaf-wrapped heritage pork, Cochinita Pibil, and the braised lamb neck barbacoa. He hopes Ka’teen recreates “the festive atmosphere of people coming together to enjoy a meal,” encourages the type of bonding he and his dad shared in Baja, and brings “back the community we all longed for during the hardest parts of the pandemic.”

“We wanted to make something a little bit unique and welcoming where people can break bread with other people,” he said. “I hope it becomes a space where people can bring their families and just kind of enjoy each other again, be completely submerged in an environment, and really escape from the normal grind.”

Designed by Bernadette Blanc, the 5,000-square-foot restaurant is 80 percent outdoors. There are no walls, just the one separating the dining room from the kitchen. Communal tables are lit with candles and basket chandeliers. Lush vegetation sprouts and hangs from every surface, blocking out the facades of the surrounding buildings and transporting diners to the tropical jungles of the Yucatán and Mayan Riviera.

“I always told myself I would never open in Hollywood,” he said. “It’s a tourist trap. But this part just south of Hollywood Boulevard is really changing. It’s got its own vibe. And [Ka’teen] is this little hidden gem.”

Avila learned to cook in California and under Alain Ducasse in Paris before returning home to work in the kitchens of L’Auberge, Marché and Michelin-starred Le Comptoir, among others. In 2012 he launched Guerrilla Tacos as a street cart side project downtown, offering Santa Barbara sea urchin and wild boar tacos to word-of-mouth fans like the Los Angeles Times’ beloved, late critic Gold a few days a week.

Seven years later, Avila had built Guerrilla Tacos into a brick-and-mortar sensation in the Arts District and earned a Bib Gourmand by the Michelin Guide to California. In 2017, he was a semifinalist for “Best Chef, West” in the James Beard Awards. Last year, Los Angeles Magazine readers voted him LA’s “Best Local Chef,” and he stepped away from Guerrilla Tacos before opening the casual Angry Egret Dinette in Chinatown.

While workshopping the offerings at Ka’teen, Avila said he didn’t really delve into history; he spent a lot of his life traveling in Baja and has visited Tulum and Mérida repeatedly over the past few years. Cooking this way, while incorporating the best local ingredients he can find, comes second nature to him.

“I grew up with it, it’s part of me, it’s in my blood,” he said. “I’m not from the Yucatan and I’m not from Mérida. So, the view of it is through my eyes, through the lens of an Angeleno, what it represents to me and how I’ve experienced it.