×
By Brad A. Johnson 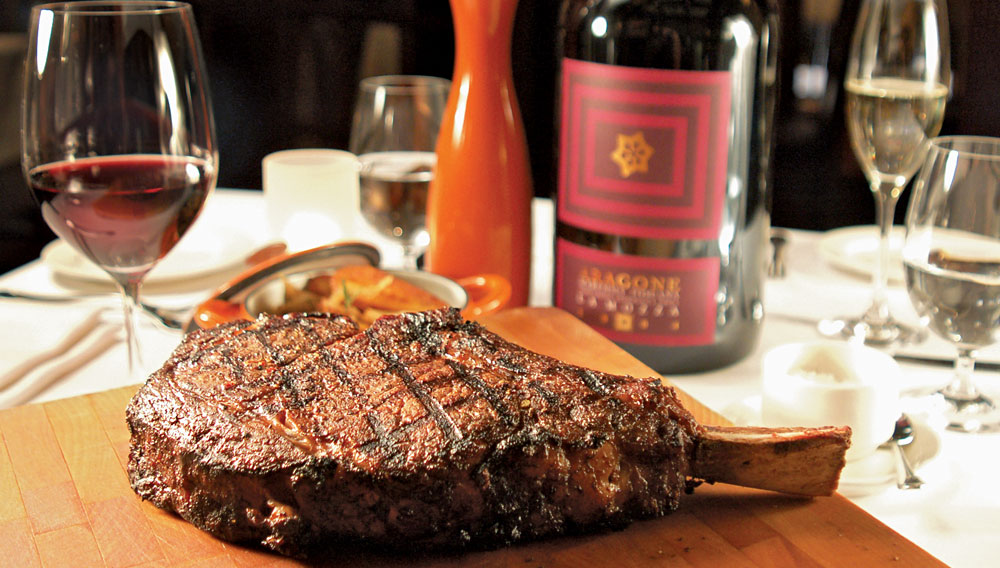 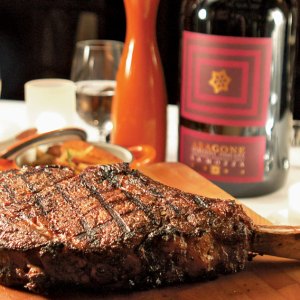 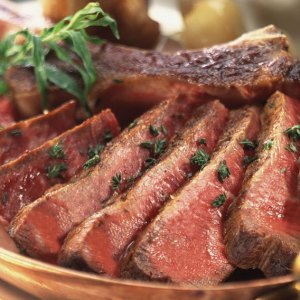 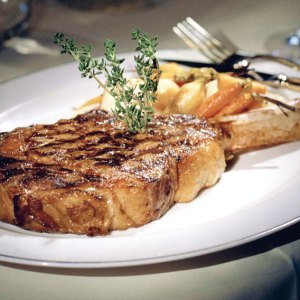 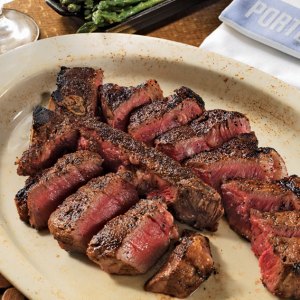 A waiter rushes through the dining room carrying a steak, and heads instantly turn. Eyes follow. Fingers point. “Did you see that?” a guy at a nearby table says, leaning into the aisle to get a better look. “There goes another one.” Heads turn again, jaws drop. Barely contained on an oversize platter of industrial heft, one of these steaks lands on my table with a graceful thunk—a 2-pound USDA prime rib eye, nearly two inches thick and still smoldering. Steak for one. The heady aroma of perfectly charred beef does not just perfume the air at Las Vegas’s Old Homestead Steakhouse, it consumes it, intoxicating everyone within finger-pointing range. Wine glasses clink. Laughter mingles with the racket of nearby slot machines. Another cadre of strong-armed waiters bearing massive hunks of meat hustles by.

All it takes is the nudge of my knife to slice completely through a steak bigger than what my local grocer passes off as a pot roast. Juices puddle underneath. And after 21 days of dry aging, the meat delivers a serious, full-bodied punch. Steak does not get any better than this. It is dizzyingly good. Revelatory—even for me, the son of a fifth-generation cattle rancher.

A tectonic shift has taken place in the Las Vegas dining scene: Instead of bragging about Michelin stars and 15-course tasting menus, every major hotel and resort is upping the ante with at least one glamorous steak house; the Palazzo hotel boasts four. In Las Vegas, some of the best chefs in the world have turned their attention to sourcing and grilling the ultimate hunks of meat: Mario Batali, Jean-Georges Vongerichten, Tom Colicchio, Emeril Lagasse, Charlie Palmer, and Michael Mina—each opened his first steak house in Las Vegas. This spring, Gordon Ramsay joined them with his first steak house, inside the Paris casino.

In Las Vegas, steak is never simply steak. This is where Mina invented a way of poaching steaks in clarified butter before finishing them over a wood-fired grill. It is where Batali built what might be the world’s largest meat locker and dry-aging facility for servicing a single restaurant, and where Vongerichten offers VIP beef tastings. The chefs at Old Homestead Steakhouse extract butterfat from whole butter, which they mix back into more solid butter, creating the fattiest, richest butter imaginable; it is then slathered on the steaks before a final pass under a 1,800-degree infrared broiler for a truly unparalleled crust. Las Vegas is where the modern steak house was first conceived, and where it continues to be innovated and celebrated. The result is the best steak money can buy, anywhere in the world.

That makes for fierce competition, and the steak houses here are constantly striving to set themselves apart, starting with the beef itself. Between April 2011 and April 2012, Las Vegas shipments of Certified Angus Beef (a premium brand of beef preferred by Colicchio and Mina, among others) increased by more than 1.5 million pounds for a total in excess of 5 million pounds—and that is but one of many premium brands or sources making their way to the city. Old Homestead Steakhouse gets its beef from Pat LaFrieda, the esteemed New York meat purveyor. In 2010, LaFrieda was forced to move his packing facilities across the river to New Jersey—after more than 90 years in Manhattan—to keep up with swelling demand. Credit Las Vegas: Since opening day in January at Caesars Palace, the 220-seat steak house—an offshoot of the original in Manhattan’s Meatpacking District—has been serving 400 to 500 customers a night, seven days a week. Ninety percent of those customers order steak. Big steaks.

Numbers like that give the city’s restaurants serious muscle in the meat market. As any steak enthusiast knows, prime beef is the top level of the USDA grading scale, followed by choice and select. Just a few years ago, prime beef accounted for about 3 percent of the total beef supply. This year—following two years of severe weather in Texas and the rising price of corn—the number dropped 0.4 percent, to 2.6 percent of the total supply, says Sean Griffin, executive chef of Bellagio’s Prime Steakhouse. And every restaurant in the country is fighting for it.

But what most people do not realize about the USDA grading scale (and what the USDA would rather we did not know) is that the inspectors actually identify three tiers of prime and three levels of choice, distinctions that are meant to be invisible to the end consumer, says Mark Polzer, vice president of business development at Certified Angus Beef. This leaves room for brands like Certified Angus Beef and elite purveyors such as LaFrieda to cherry-pick the exclusive top tier of prime. Or in the case of Carnevino, Batali’s steakhouse in the Palazzo, “We have our own guy on the line at the beef-processing plant who hand-selects the very best of the prime at the exact moment that it is being graded,” says the restaurant’s culinary director, Jason Neve. In other words, there is a velvet rope in the beef industry, and the big boys in Las Vegas get to cut in line. They see and select meat that other steak houses can only dream about. And the chefs take it from there.

Vongerichten was the first to reinvent steak for Las Vegas—or anywhere, for that matter—when he opened Prime Steakhouse at Bellagio 14 years ago. A novel experiment at the time, Prime broke the mold with a steak house dining room that was neither clubby nor masculine. Swathed in velvet and drapery, with white-clothed tables set with Bernardaud china, Prime was as elegantly refined as a Michelin-starred restaurant in Paris, but with a menu meant to challenge the very best steak houses in America. It is still one of the toughest reservations in town. When the economy slumped and the rest of Las Vegas crapped out, says Griffin, “We never felt it.”

When Aria Resort and Casino made its debut in 2009 amid the city’s worst economic time, Vongerichten introduced yet another steak house—his name prominent this time. Jean Georges Steakhouse instantly became Aria’s busiest restaurant. Whereas Prime is posh and sumptuous with not much of a bar scene, the restaurant at Aria is energetic, with a circular bar at the entrance where a flat-screen TV is tuned to whatever sporting event happens to be drawing the hottest bets. The crowd is younger, clad in jeans instead of suits, and seems to be interested equally in artisanal cocktails and cult Cabernets. “Of Aria’s big six,” says executive chef Robert Moore, referring to Aria’s six celebrity-chef restaurants, “we do almost double the business of our next closest neighbor.”

Batali’s 4-year-old Carnevino, the most expensive steak house in town, grills more than 5,000 pounds of steak a week. To head Carnevino’s unprecedented meat program, Batali tapped renowned barbecue guru Adam Perry Lang, a veteran chef of Le Cirque and Daniel in New York and Guy Savoy in Paris. Batali and Lang built a 2,000-?square-foot warehouse and butcher shop across town, where slabs of beef are moved around with forklifts. As the beef rolls in, Carnevino’s chefs judge each cut and decide how long it will age (typically 90 to 120 days). They set aside the fattiest, most heavily marbled cuts and let them age for up to an entire year for the restaurant’s off-menu Riserva program, in which steaks are sliced to order at the restaurant—at $108 per inch. The outer layer of fat, combined with the internal marbling, determines how long a steak can age. Dry aging is actually a classic method of preserving meat: The fat around the edges helps preserve the meat inside, and as it ages, the muscle becomes more tender. It takes a very special piece of prime to benefit from an entire year in the meat locker.

At Carnevino, I order the 240-day Riserva dry-aged rib eye—cut a generous one-inch thick, the width of a single rib. The steak is delivered to the table via a butcher-block trolley. Then, using the blade of a large carving knife, the waiter scoops the steak up and tilts it toward me so I can get a better look. It looks like more than an inch to me, but I am certainly not complaining. He goes about carving and plating it, and I can smell the fragrant musk from across the table even before he makes the first slice. As he sets it in front of me, the sommelier arrives with a bottle of 1998 Tenuta Friggiali, a Brunello from Montalcino that is one of Italy’s most prestigious wines—100 percent Sangiovese from a hilltop in Tuscany. With a color so deep it appears to be tinged with black ink, this is a wine that could actually overpower an ordinary steak. But this is no ordinary steak: It has the haunting aroma of fresh black truffles, the unmistakable scent of perfectly aged meat. As I take my first bite, my eyes almost water. The flavor is that magnificent and intense. I taste hints of blue cheese and foie gras, and as I reach for the Brunello, it occurs to me that in a city where almost everything is about flash and fakery, the steak is as real as it gets.