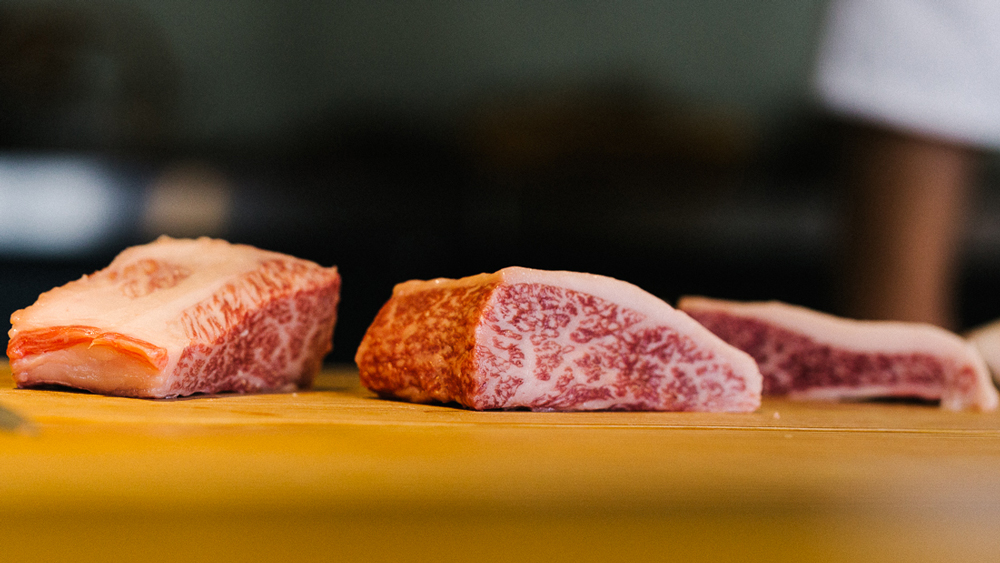 When you eat a sliver of Kobe beef, it literally melts on your tongue. The Japanese steak is speckled with unusually high levels of unsaturated fatty acids that dissolve at temperatures lower than your body and fill your mouth with the rich flavor of butter. And it’s the promise of this sensation that draws diners to steak houses around the world. The only problem? Many of them aren’t even selling Kobe.

The Kobe Beef Association, based in Japan, only certifies about 5,000 heads of cattle per year as Kobe and then tracks the meat’s movement around the globe. The strict certification process requires that the beef comes from Tajima-gyu cows, a pure breed whose lineage traces back to the 1600s. The cows also must be born, raised, and slaughtered in the Hyogo Prefecture, and the beef must pass strict marbling standards.

For years, restaurants and distributors that are not licensed to serve Kobe have claimed to offer it. The fabled beef is not being sold under the table; Kobe is too rare and tracked too closely for a black market to exist. Sellers might be uninformed themselves and not sure how to differentiate between Japanese beef varieties (all Kobe beef is considered wagyu, or Japanese cattle, but not all wagyu breeds are classified as Kobe). Or, they are intentionally misleading consumers—something that, apparently, isn’t so hard to do.

“I could give guests another Japanese beef and tell them it’s Kobe, and I guarantee you 95 percent of them would have absolutely no clue,” says David Schlosser, chef of Shibumi, the only restaurant in Los Angeles certified to sell Kobe. Schlosser doesn’t do that. He imports eight pounds of Kobe per week and charges $152 per four-ounce serving. He only serves it one way: lightly salted and cooked medium rare, so diners can taste it “clean.”

“I’m honored to serve it,” he says. “I lived in Japan for four years, and I never saw Kobe. The rest of the whole world wants it. Just think about London, Hong Kong, and Singapore . . . all these cities that can afford this stuff. So to actually have it is pretty serious.”

As of September, only 32 restaurants in the U.S. are certified to sell Kobe beef. Those restaurants include 212 Steakhouse in New York, Nick & Sam’s Steakhouse in Dallas, and Cut by Wolfgang Puck in Las Vegas. Japanese producers are lobbying for a geographic indication label—the same kind that Champagne has—to distinguish it from other beef. And the Kobe Beef Association has attempted to take legal action against the restaurants and distributors that falsely advertise their beef as Kobe. But so far, says Schlosser, these efforts have been unsuccessful.

“The Japanese have secrets to maintaining the cattle that they’re not exposing,” he says. “You need to hold on to your IP, and the Japanese do that very well.”

The restaurants can prove the provenance of their Kobe by showing their certificate of authenticity, which includes a 10-digit ID number that traces the cow’s lineage. And if you’re paying upward of $600 per pound, it may be worth boning up on your Japanese so you can read the certificate before biting into your next savory steak.