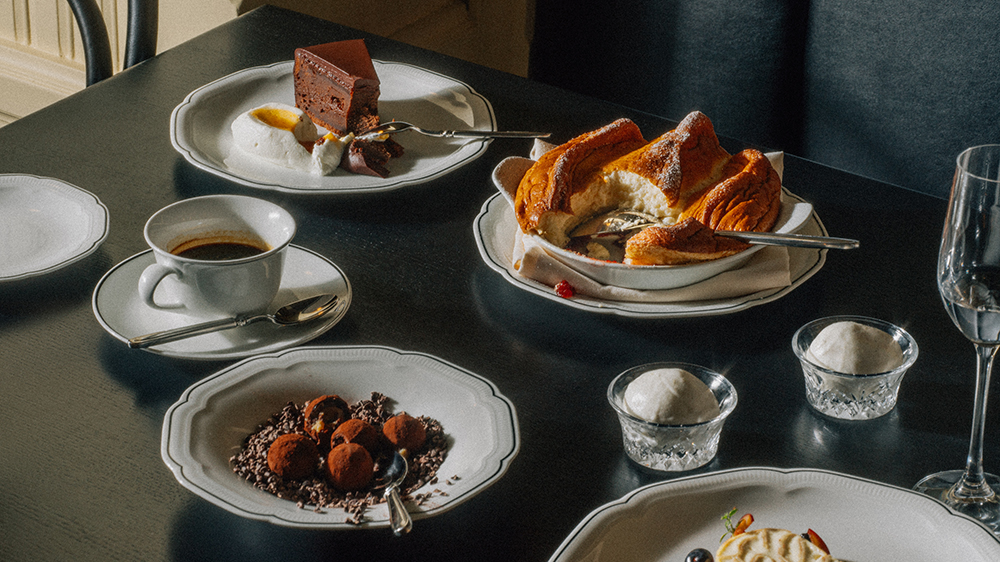 For those looking to be transported to turn-of-the-century Europe, you don’t have to go much further than New York City’s NoMad neighborhood. There, the chef Markus Glocker has just opened Koloman, a contemporary French restaurant with Viennese touches.

Taking its name from Koloman Moser, an Austrian artist who helped spearhead Vienna’s Secession movement, Koloman is serving up classic European dishes with a modern New York spin. Glocker has taken his fine-dining background (including stints at Bâtard and Gordon Ramsay restaurants) and made it a little more casual. There’s no tasting menu here, and while Koloman is currently only open for dinner, it will be expanding into an all-day affair inside the old Breslin space at the Ace Hotel.

To begin your meal, you may opt for oysters—which come with an atomizer filled with Gölles asparagus vinegar that you can spritz on the bivalves yourself—or a duck liver parfait that’s switched out Grappa or Sauternes for Kracher, a sweet Austrian wine. Larger dishes range from the light to the hearty: A seared fluke with mandelbrot brown butter is Glocker’s take on trout amandine, while beef tenderloin with a bone-marrow crust is perfect for the crisp autumn weather on the horizon.

Classic French and Austrian dishes also make an appearance, of course. The triple crème soufflé features Pleasant Ridge cheddar and is accompanied by mushroom jam. And the most Austrian of dishes—schnitzel—hews to its standard form, served with lingonberries, sea buckthorn and a potato and cucumber salad.

To round out menu, the beverage director Katja Scharnagl (formerly the chief sommelier at Le Bernardin) has put together a wine list spotlighting both French and Austrian wines. Positioning itself as a place to celebrate the special moments—both the big and the small—Koloman will also offer several Champagnes by the bottle, ranging from the more affordable ($60 to $110) to the expensive.

With decorative touches such as brass and glass fixtures designed by the restaurant’s namesake himself, Koloman has embraced its inspiration from the back of the house to the front. May we raise a glass and say “prost!” to that.

Koloman is now open Tuesday through Sunday, 5 to 11 pm.

Click here to see all the photos of Koloman.