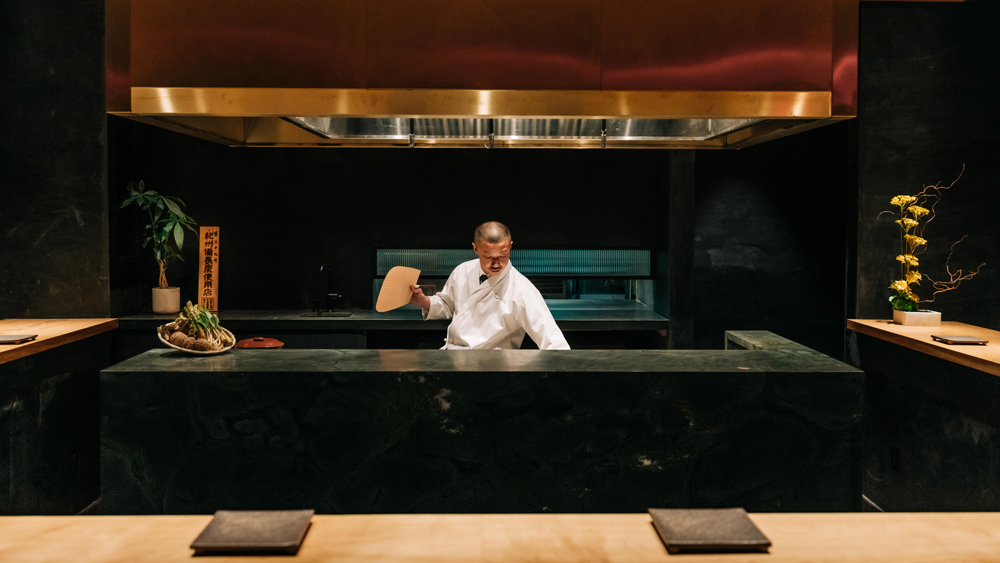 There are few things as gauche as a chicken dance. It doesn’t even feel right to pair those words in reference to exceptional fine dining, but it’s hard to avoid when chickens and dance are intrinsic to the joy of dinner at Kono, Atsushi Kono’s 14-seat yakitori restaurant in New York City’s Chinatown.

Kono, who helmed the kitchen at yakitori stalwart Torishin for a decade, sources organic birds from a farm in Pennsylvania and cooks 20 a night for his 10-plus course omakase. A recent meal started with a succulent chicken breast roulade with dashi jelly. Next, came a pâté of chicken liver and thigh, miso and black truffle sandwiched between thin rice crackers (a play on monaka, a Japanese red bean paste snack).

As the starters progress to skewers—the main event—platters heaped with 20-plus chicken parts await Kono, who transfers them a few at a time to a binchotan grill-as-altar that anchors the restaurant. This is the moment when Kono’s ballet of salting, dunking, flipping, squeezing, tapping, flipping and fanning begins.

Kono grew up in the Saitama prefecture of Japan, and his parents ran a seafood market and restaurant. Around 11 or 12 years old, he started helping out with the family business, but all he really wanted to do was dance. “I’m a b-boy,” says Kono, who eventually became a professional break dancer. Back home, he taught break dance classes and choreographed and danced in music videos. In 2002, he joined Rock Steady Crew, an influential, international hip hop group with roots in the Bronx.

Three years later, Kono moved to New York City to pursue his dance dream. He competed, performed, judged competitions and DJed, and like many young artists, he also got a job at a restaurant. It was at Torishin that Kono honed his second craft and discovered that dance and rhythm were inseparable from his cooking. “My life was hip hop music,” says Kono. “Cooking yakitori, in tempo, felt very natural. My brain and body is always on beat.”

Breakdancing also encouraged Kono to experiment and improvise within a tradition. It gave him discipline and style. At Kono, those lessons carry over in the unorthodox hybrid of yakitori and kaiseki cuisine, chef’s embrace of modern techniques and pursuit of zero waste cooking (“I want to use everything from head to feet,” he says), and the physicality of service.

Before any skewer hits the grill, Kono seasons it with salt, bouncing lightly on his feet in time with the salt shaker. At moments, it appears as if he’s playing the grill like a xylophone, bopping it with skewers-as-mallets. If not choreographed, all his work is synced with Kono’s eclectic playlist of jazz, funk, soul, R&B and rap. “I pick real hip hop, sometimes very strange,” he says.

This is not dinner and a show. It’s precise cooking from a chef and team in their most natural state. Kono has two sous chefs who help him on the grill; one is a rock and roll musician and the other is a jiu jitsu master. Their rhythms are all different, says Kono, but they work in service of the yakitori, keeping pace with diners and changing tempo to improve the flow of service.

Watching them at the grill, anticipation builds: What exactly are they cooking? Who’s going to get what cut first? Which is mine?

Before you know it, there’s a lacquered, bouncy, wasabi-laced chicken heart before you, soon followed by custardy livers with centers so yielding that the organs have the tension of a perfect ravioli. Next, for me, came delightfully chewy, fatty chicken belly, then chicken thighs, juicier than Lizzo’s, with a shishito pepper tucked in between them.

Kono turns each skewer up to 50 times, his focus locked on the grill. “Little by little the skin becomes crispy. Little by little they brown,” says the chef. Several times, as the skewers cook, he dips them in tare, the yakitori staple of soy sauce, sake or mirin, and sugar (Kono won’t divulge his recipe). Kono and his cooks constantly touch, push and squeeze the skewers. “With my hand, I know the original weight of the chicken, how many grams they weigh raw. My hand also knows the finished weight,” he says.

Kono keeps his paper fan in near constant motion, a primitive tool with which he circulates smoke and controls the grill’s temperature. Shiitake mushrooms and chicken skin-wrapped green onions cook over high heat, and lean breast meat, partially guarded by shiso and umeboshi, gets a more delicate treatment. It barely has a tan after leaving the grill.

The meal’s wonder lies in waxing and waning texture, temperature, fat content, and caramelization. For his tsukune, Kono combines minced duck and chicken and serves the loose sausage with a raw egg yolk that, once burst with the pointy end of a skewer, becomes an instant sauce. What I thought was a deeply burnished chicken wing was actually a third foul: smoky, bone-in quail.

After those two rich skewers, dinner at Kono winds down—unless you choose (and you should) to add on a few extra esoteric skewers to your meal. The night of my visit, there was chicken skin skewered in ribbons and grilled until the exterior was a crunchy sheathe encasing molten fat. I hadn’t previously considered the subtleties of chicken skin, but Kono features a rotation of breast, neck, belly, and gizzard skins. There were also chicken feet and cockscomb—the latter a prize for diners who, like me, enjoy chomping on springy cartilage. Kono is particularly proud of the chochin, an ovary surrounding an unfertilized egg, still clinging to its fallopian tube and liver. “All these organ systems connect,” he says. “I recommend taking it in one bite.”

Although he’d prefer to exclusively sell chicken, Kono also offers wagyu and king crab legs at the end of the tasting. “I just want to make people happy,” he says.

Meals at Kono finish with a cup of brothy noodles and créme brulée topped with black Okinawa sugar. Together, they’re a pure comfort cooldown from one of the most exhilarating kitchen dances in New York City.