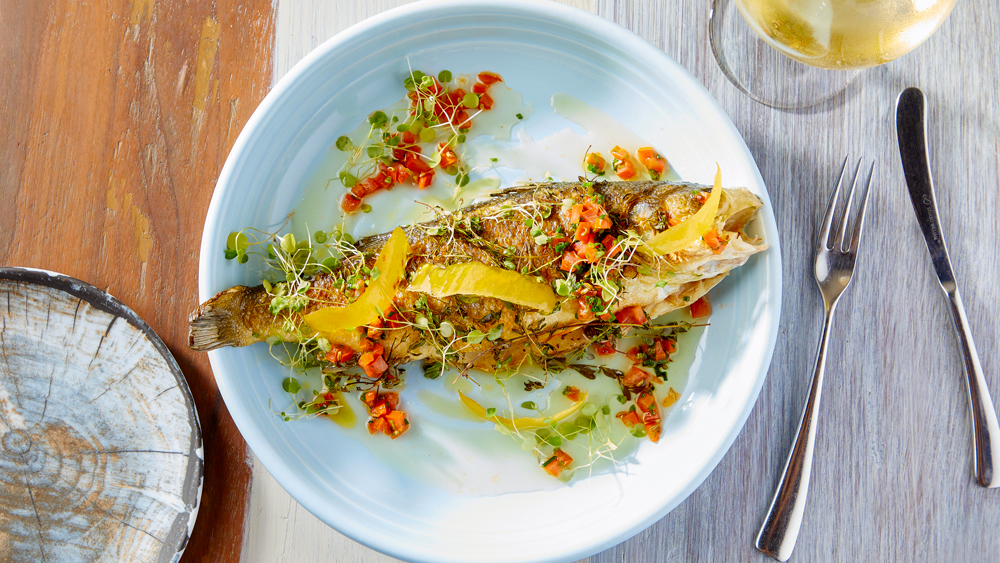 When chef Carrie Nahabedian announced her new Chicago restaurant, Kostali, she found herself spending more time talking about what it isn’t versus what it is. She would like to be clear: Kostali is not a resurrection of Naha, her Michelin-starred restaurant that has been shuttered since March 2018.

“We had Naha for 18 years and everyone thought, oh, this going to be the new Naha,” she said. “It isn’t. A lot of people thought we were going to bring things over from Naha. And I was like, no!”

While she has plans to re-open Naha sometime in the future, Kostali is a wholly unique identity, a breath of fresh, salty sea air in her portfolio. The restaurant, which showcases the bold flavors of the Mediterranean and the Middle East, opened earlier this week inside The Gwen hotel.

“The name ‘Kostali’ comes from the Maltese language and means ‘coastal,’ but it’s more about the geographical location,” she said. Malta is an island near Italy, Tunisia and Libya; a cultural crossroads. “You can find foods here from Portugal into the Mediterranean, into the Black Sea, North Africa, into the Middle East.”

The menu is inspired by her travels through Southern Europe, the Baltics and Central Asia, and from her family’s Armenian and Greek heritage. She’s incorporating spices and ingredients from all of these places, from Israel and Morocco to Spain and France.

“You’re not going to find luxury ingredients like foie gras and caviar,” she said. “What you’re going find is really clean, fresh, great food that’s prepared simply, but accented by heavy spices. Not hot spicy. I have taken each dish multi-dimensional, all the flavors are layered in. I don’t like boring food.”

The award-winning chef is back again in Chicago.  Photo: courtesy Paul Strabbing

Starters include semolina-crusted fritto misto; hummus with ground lamb, shaved radishes, walnuts and mint; and feta turnovers—one of the only semi-recognizable dishes from Naha—that are stuffed with dates, pumpkin and za’atar spices. Mains include a ribeye with Roquefort; pasta with clams and tomatoes; and a tagine of poussin, which is served with chickpeas, couscous and candied oranges.

There is plenty of house-made bread, too, like tahini rolls and seeded fattoush. (“I’m Armenian. Bread is life. It’s a basic necessity,” Nahabedian said.) And there are spreads and dip to accompany it, such as Greek olive oil, charred eggplant and whipped feta with peppers.

The drinks list only features wines from this coastal region as well; there are none from the New World. The bar—made of enameled lava stone—will also offer salty, crunchy snacks.

“You feel like you’re on vacation,” she said. “All we’re missing is the sea.”

Like her other restaurants, Kostali is a collaboration between the chef and her cousins: Michael Nahabedian, who oversees the drinks program, and Tom Nahabedian, an architect whose work has earned him a James Beard Award for design. At Kostali, he outfitted the space with lots of gold, metal and Azure blues, the colors and materials of the riviera.

Carrie made a name for the family when they opened Naha in 2000. There, her Mediterranean-American cuisine was awarded a Michelin star seven years in a row. She also earned a James Beard Award for “Best Chef, Great Lakes” and in 2013 they opened Brindille, a Parisian restaurant.

In March 2018, they closed Naha with plans to open it elsewhere soon. It has been stalled by lease negotiations.

“While we were looking for finalizing our space for Naha, this opportunity [with The Gwen] came up,” she said. “I was an executive chef with Four Seasons Hotels, three properties over 10 years. I’ve always wanted to have a restaurant in a hotel. I never thought it would happen in Chicago.”

While there was some talk about moving Naha over into the hotel, it didn’t really fit; they needed more space. So she and her cousins bounced ideas off of each other—mostly while hanging out in the hotel, an environment she says inspires her creativity—and came up with Kostali. It fit, and Nahabedian believes it’s going to settle into the Chicago dining scene as nicely as Naha did.

“This is going to become part of the restaurant community very, very quickly. We’re treating it as a restaurant that happens to be in a hotel,” she said. “It certainly has the capability of gaining [a Michelin star]. This isn’t going to be an anonymous restaurant.”

The wine and food is inspired by Nahabedian’s heritage.  Photo: courtesy Kostali/Neil Burger