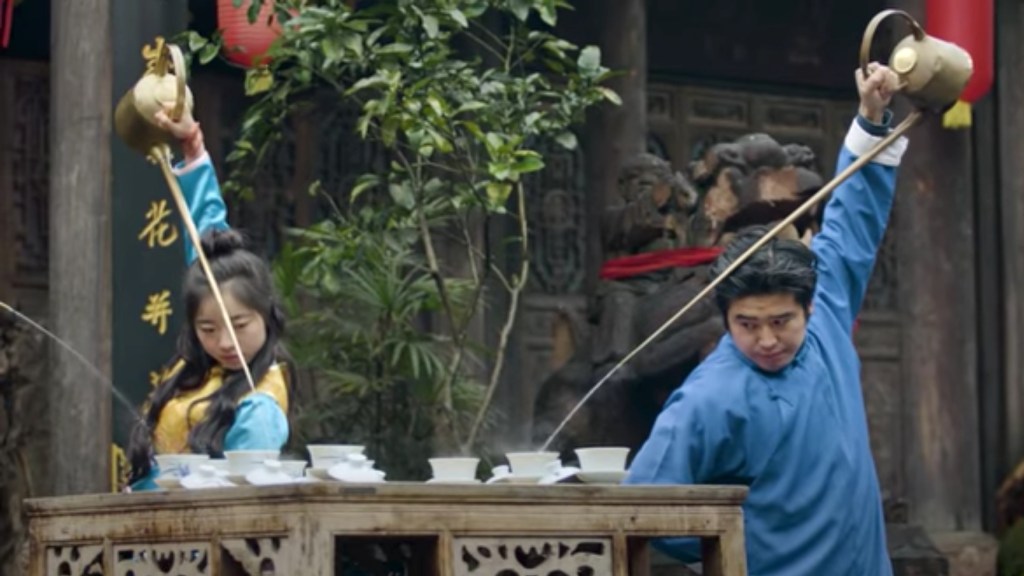 The Internet gets bored pretty quickly. That we were so enamored with Salt Bae for so long is truly a testament to Nusret Gökçe’s, well, let’s call it “genius.” He made the magical salt sprinkling video, we lost it, Salt Bae opened a restaurant in New York City and we all lost it some more. And then he lost it – our attention, that is. People took in the spectacle of Nusr-Et Steakhouse in Midtown Manhattan, tried the overpriced meat, had some salt sprinkled on their laps, and then said, “great, what’s next?”

Over at Eater SF, they may have found it. In the city’s Chinatown, at Z&Y Restaurant and Chili House, Xumin Liu recently arrived stateside to perform the elaborate gongfu cha, also known as Kung Fu tea ceremony. For eight weeks Liu will perform at the two restaurants owned by chef Li Jun Han.

A year ago, Great Big Story traveled to Sichuan province in China to visit Liu, to go to the source of long spout tea performance. He told the story of an emperor two millennia ago who had the long-spout pot made so servants and would-be assassins couldn’t get too close to him when pouring his favorite beverage. Later, that evolved into a performance involving the pot and pouring and a series of 18 different poses that practitioners strikes as they’re serving people.

“Liu has traveled to San Francisco to let the local people experience the ancient arts of face swapping and Kung Fu Tea. For most, exposure to authentic Sichuan arts and culture has been limited to the theater or movies,” Han says. “Over the next two months, our guests will get to view these rare performances, take photos, and experience something that normally would require a trip across the Pacific Ocean.”

Among the people enchanted by the performance so far has been none other than the queen of California cooking, Chez Panisse’s Alice Waters.

An amazing guy entertained us at Yank Sing pouring tea and dancing in costume! How rich (and unknown to me) the Chinese traditions are!

But she’s not the only one. Instagram is filling up with people filming Liu at work.

And sometimes they also capture servers trying to squeeze by in the background as they try to tend to the rest of their tables.