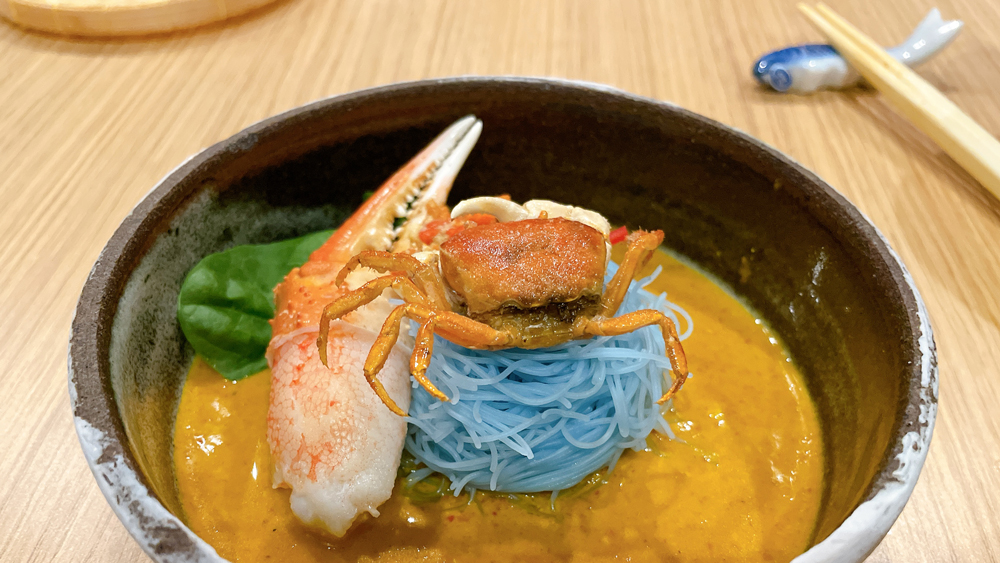 During the pandemic, Los Angeles chef Nan Yimcharoen of Kinkan became an underground takeout sensation with exquisite chirashi bowls and multi-layer bento boxes that she made at home. The appeal was obvious: Even during a moment when sushi slingers all over the city offered beautiful to-go meals, Yimcharoen’s artfully constructed and memorable food stood out. Opening and then eating one of the jewel-box creations she assembled with pristine raw fish, uni, wagyu, crab and ikura felt like a special occasion, even if it was a Wednesday night and you were watching Tiger King while you had dinner on the sofa.

Kinkan is no longer underground, but it is still very much a DIY venture that simultaneously feels like an up-and-coming business and an art project. In June, Yimcharoen opened a Virgil Village restaurant, which she is financing with her savings and an inheritance from her grandmother. She’s still doing her gorgeous takeout, but the main event at the new Kinkan restaurant is a revelatory Thai-Japanese omakase in which the chef is using the same premium ingredients while exploring her Bangkok roots.

For now, reservations are only available to those who have previously ordered takeout. Yimcharoen wants to build relationships with guests before they sit at her 25-seat restaurant for a 10-course, $150 tasting menu that features madai, bluefin tuna and Ōra King salmon she dry-ages herself.

Her first omakase is called Homage to Grandma. It includes a seasonal crab curry that Yimcharoen describes as “crab on crab on crab.” She gets female stone crabs and uses the innards and roe for the soul-warming sauce. Then she puts a snow crab claw and blue noodles (made with butterfly pea flower) atop the curry. When they’re in season, she’ll add a sawagani, a tiny soft-shell freshwater crab, as an exclamation point.

Another remarkable dish is a tuna larb that Yimcharoen refers to as “the rose of Kinkan” because she carefully slices bluefin tuna and layers it in a way that resembles a flower. She’s here to shatter stereotypes. She wants people to know that Thai food can be as elegant as any fine dining. She also wants guests to learn that Thai food doesn’t have to be overly spicy. Her omakase is nuanced and balanced, with sour, sweet, savory and umami notes, but there’s nothing here that makes you feel like your face is melting.

“My family lived with my grandma in Bangkok, and she made central Thai food,” Yimcharoen says. “It was Bangkok-style. There was nothing that spicy, nothing more than a mild level.”

Yimcharoen’s grandparents traveled with Thai ambassadors, and her grandmother, Chaleam, cooked for dignitaries and also ran a dinner-cruise business. At home, Chaleam insisted that the family eat together at 7 pm and she taught everyone proper table manners. Yimcharoen enjoyed spending time with her, especially when it involved planning meals.

“My grandma was a big seafood eater, and we would go to the market and pick out crabs,” she says. “When she cooked dinner, I liked to be in the kitchen and I tried to help her. She would teach me. I started cutting fruits, and my hand had a lot of scars.”

For an afternoon snack, Yimcharoen’s grandmother often made rice crackers that she sun-dried, fried and served with shrimp and pork. That’s the inspiration for a Kinkan omakase dish with a lobster-topped rice cracker alongside a spring roll.

In many ways, Yimcharoen has taken an unlikely path to becoming one of LA’s hottest new chefs. When she moved to the United States a decade ago, she thought she was going to live a domestic life.

“I was looking for a cooking class to become a perfect housewife before I moved,” she says.

Yimcharoen spent a couple weeks at a Bangkok restaurant learning techniques from a friend who had gone to culinary school in New York. She shows me a notebook with recipes from that restaurant, Mango Tree. Then she smiles and says that her marriage didn’t work out and that her ex-husband recently came by Kinkan for a meal.

Yimcharoen is self-deprecating by nature. The first time I DMed her about takeout, I mentioned I had heard a lot about her from friends and wanted to learn more. “I’m nobody,” she replied, even though she had built a buzzworthy to-go business that was being frequented by in-the-know scenesters like Matthew Koma, Hillary Duff, Joey King and Albert Hammond Jr.

When she opened her restaurant, Yimcharoen wasn’t sure how guests would react to fine dining riffs on Thai food made with ingredients usually found at pricey sushi bars. But on the recent night I had dinner at her seven-seat counter, she got some important validation from some other guests.

“There were some Thai people here,” says Yimcharoen, who adds that the table included the owners of a local Thai restaurant. “I went to talk to them. They said, ‘This is the way it’s supposed to be.’ One of them was like, ‘This is so good. It gives me goosebumps. The flavor is perfect. I don’t like spicy, and none of this is spicy.’”

Yimcharoen has also been fortified by the relationships she’s formed with other businesses in the neighborhood. Kinkan shares a back-door alleyway with the hotly tipped Courage Bagels, and the restaurants send each other food. Ken’s Ramen has been another ally in Virgil Village. Yimcharoen decided to take a chance on the area after visiting Melody Wine Bar and seeing how lively it was, and she’s now on a group chat with Courage, Melody and Rick’s Produce. On the evening I visited Kinkan, dessert included dragon fruit from Rick’s Produce, which is down the street and gives her a discount. After a year in which she made meals at home, Yimcharoen is thrilled to be part of a thriving food community with other independent entrepreneurs.

Her underground vibe remains. She says she’s in the middle of a soft opening but might just keep things the way they are indefinitely. Her staff includes friends and someone who works at Courage during the day. Things are busy at Kinkan, and there are days when Yimcharoen starts making 60 to-go orders at 10 am and then has to prep for her omakase. She’ll stay at the restaurant until midnight before she unwinds. Limiting her omakase to prior customers helps keep Kinkan under control.

“I’m happy,” Yimcharoen says. “Every day is good now. Some of my guests offered to be a partner in the restaurant, but I wasn’t sure about that. I didn’t want this to be more like business. Making food for people during Covid was where I got my happiness. My guests know me. They followed my journey on Instagram and saw me find a space and pick up furniture and get flowers. I think most of them know my story very well.”

And for those who are still learning the story, Yimcharoen is happy to explain why she’s merging Thai and Japanese food.

“People ask me a lot, ‘Why is it Japanese?’” she says. “I appreciate the cuisine that is so delicate in terms of the way Japanese chefs take care of each ingredient. Thai food is complex. So when you combine the two cuisines together, they enhance each other and we get beautiful dishes. It’s like pairing the right wine with the right food. One plus one equals three.”