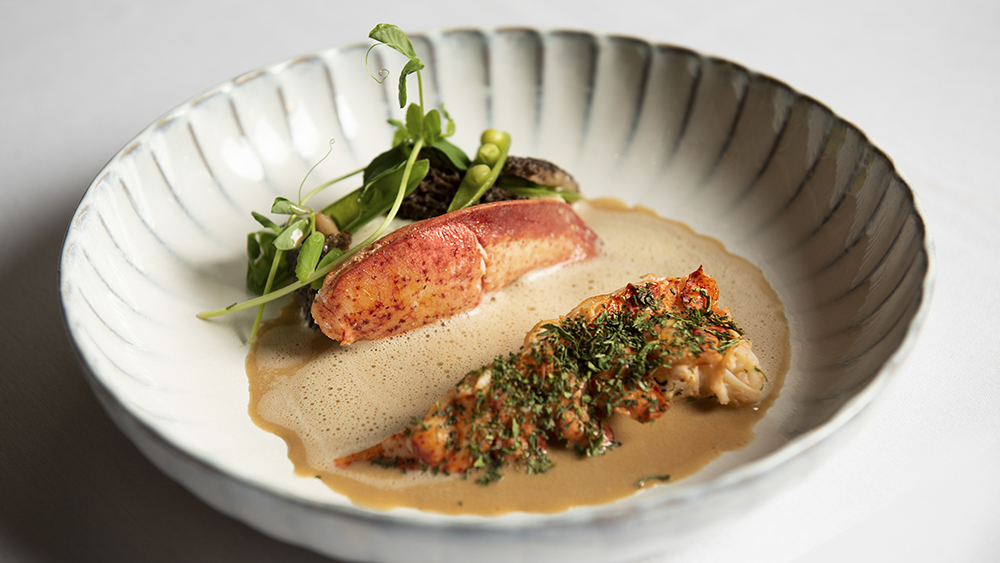 French food is often synonymous with indulgence. The butter, the luxurious sauces, the rich meats—all of it adds up to delicious food, sure, but not something you necessarily want to eat all the time. The Michelin-starred chef John Fraser (formerly of Nix) is hoping to take French cuisine in a different direction, though, at his new restaurant La Marchande, which opened Tuesday.

Located on Wall Street, inside the new Wall Street Hotel, La Marchande is aiming to be a neighborhood restaurant for New York’s FiDi set. “We’re really trying to have a level of approachability maybe balanced with a level of ambition so that you feel like something exciting is happening here,” Fraser told Robb Report. That translates into a menu featuring items you could hopefully eat every day, with light bites and drinks sitting alongside some more substantial offerings, such as a lamb prime rib.

The restaurant sits on the site of American’s first stock exchange and is also near New York City’s historic pearl trading district. Fraser drew from this history, calling his research a little bit “nerdy,” to inform the menu and direction of the restaurant as a whole. “We’re using a global pantry in order to cook French food,” he said. “We’re using those tools, the global-pantry tools, to lighten things up a little bit and maybe not be quite as heavy or cream-and-butter-laden as what would be a French brasserie.”

One of the summer rolls  Liz Clayman

Some examples of this ethos? Summer rolls—although Fraser said he would barely call them that—contain unexpected ingredients such as beef tartare, tuna tartare and pickled asparagus. A clam dish is made of clams outside the shell poached in butter alongside pickled ramps and rice crackers. And La Marchande’s version of lobster is served grilled with a creamy-yet-delicate scallop mousse and a lighter version of the traditional sauce américaine made with coconut milk.

“I love French food and I respect it tremendously,” Fraser said. “However, this is not that. I think this is not even trying to compete with that. It’s something maybe just slightly more vibe-y and much more light and fresh.”

The food is accompanied by a 120-bottle wine list curated by the beverage director and advanced sommelier Amy Racine. Low-ABV drinks make for a great pairing with some of the lighter fare, and the bar is highlighting exclusively French vermouths.

As far as décor goes, La Marchande is aiming for a classic French café-society vibe. The carved-wood bar is accented with green marble, antique mirrors and pink floor tiling, while the raw bar contains mother-of-pearl details, in a nod to the restaurant’s history. That space then opens up to the dining room, where booths in the back can be curtained off for a more private experience.

With New Yorkers returning to both the office and restaurants in droves, Fraser hopes La Marchande will be part of the city’s revitalization. “As a New Yorker, I want to come back stronger than we used to be,” he said. “And I think that opening something new is one of the most important pieces for us to contribute.”