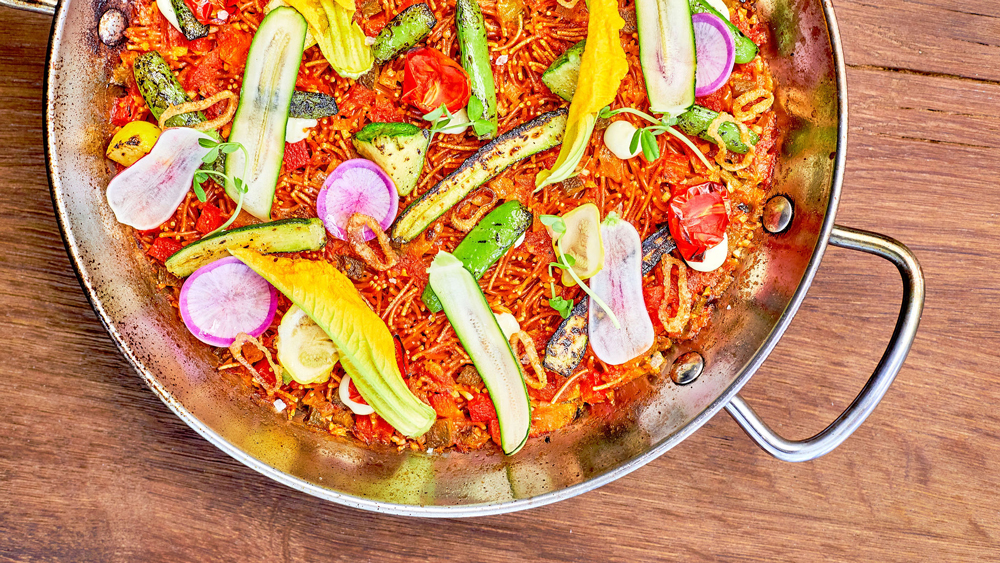 It’s easy to go big when you’re having small plates in Los Angeles.

At Saso, chef Dominique Crisp’s new Basque-inspired restaurant in Pasadena, the dinner menu’s first section features an array of pintxos (shareable snacks). You can order prawns or clams grilled in a Josper oven from Barcelona. You can have cheese-and-charcuterie, croquetas, wagyu steak bites, grilled mushrooms and much more. Or if you can’t decide between the 11 options, you can order what’s listed on the menu as the esperientzia for $120. That gets you all the pintxos, and it’s one of the city’s most baller beginnings to a tremendous meal.

Saso is many things at once, but it’s a superb seafood-focused restaurant at its core. Crisp, who grew up on his family’s vineyard and farm in Oregon, is embracing an idea he fell in love with when he visited the Basque Country a couple years ago: He’s getting local seafood and letting the ingredients shine.

“It’s just like, take really great seafood and throw it in a Josper oven,” Crisp says “That’s the mentality of a lot of these restaurants.”

Crisp isn’t alone in wanting to celebrate this ethos of beautiful simplicity in L.A. Chefs around the city are riffing on Basque and Spanish influences while cooking with local ingredients. They’re making tapas a viable dinner option in a city where good Spanish food has been hard to find. They’re showing guests that a great night out can mean sharing small plates before a big main course like a bone-in wagyu steak, a whole fish or a pan of paella.

Here are three new Spanish-inspired restaurants where you can start small and end up having an all-out feast for dinner.

Gasolina Cafe just started dinner service in April and it already feels like the standard-bearer for evening tapas in Los Angeles. Chef Sandra Cordero makes excellent pan con tomate. Her gambas al ajillo, shrimp atop a beautiful pool of olive oil with garlic, diced guandilla peppers and espelette, is a showstopper. Cordero proves that tinned mussels with charred bread can be as transporting as any elaborate dish. She truly understands that Spanish food, and so much great food, is about using a limited amount of quality ingredients and not overcomplicating things.

Gasolina is the exact opposite of a dinner destination that came out of nowhere. The Woodland Hills mainstay debuted as a small daytime cafe in 2015 and expanded to a larger space in 2019 with the intention of adding dinner. The pandemic slowed things down, but Cordero’s free-spirited dinner menu was worth the wait.

She laughs when she thinks about how her aunt has texted her after seeing Facebook and Instagram posts of Gasolina’s food.

“It’s like, ‘How dare you call that pulpo gallego?’” Cordero says, referring to a dish where Gasolina serves octopus with pommes puree. “Well, Auntie, it’s called creativity in the kitchen. It’s OK.’”

It makes sense that Gasolina is a restaurant that often colors outside the lines when it serves Spanish food. Cordero is half-Dutch and half-Spanish. She grew up in Amsterdam.

“I was in a real blue-collar neighborhood,” she says. “My best friend and neighbors were Moroccan, Turkish and from Suriname. My dad got remarried to a Cuban lady and my mom to a Greek husband. I definitely grew up around a lot of different food cultures. I loved eating with my Moroccan friends and eating with your hands.”

Cordero spent summers in Galicia, Spain, where her family had a small farm.

“The food experiences that I had in Spain really influenced my cooking,” she says. “And then when I came to L.A. there was so little representation of Spanish food.”

Cordero wants to rep Spanish food and also European cafe culture in L.A. while also just doing what she feels. This includes a strong coffee selection; salads with farmers market vegetables; grilled asparagus with French-Dutch flavors; a relaxed setting that encourages people to linger; and seasonal paellas with the best seafood, meat and produce she can find.

“You can do anything with paella as long as you get a super tasty stock and don’t overload them,” says Cordero, who understands that Spanish food, like life itself, is about having fun but also about balance.

Chef Rudy Lopez fondly remembers the childhood trips he took to visit his grandfather in Spain every summer.

“As a kid, that really makes a big impression on you, when you’re walking through Spain and you see the charcuterie shops and everything,” Lopez says. “You’re just blown away, seeing the jamón. So I just kind of wanted to do something where I could still cook with local ingredients but showcase a little bit of my heritage and what I loved seeing as a kid.”

At Soulmate, his stylish and sceney new West Hollywood restaurant, Lopez is giving guests the option of three kinds of Spanish ham on pan con tomate. He’s also playfully riffing on tapas. Soulmate serves “paella bites,” which are Lopez’s crowd-pleasing version of spicy tuna crispy rice that he makes with bomba rice and a cuttlefish sofrito. Soulmate has Santa Barbara uni toast with rock shrimp and chorizo that also isn’t a traditional Spanish dish, but Lopez knows that cooking in L.A. provides him with the platform and ingredients to serve it.

“I think the only reason I’m able to do a dish like our uni toast is that we’re in L.A.,” says Lopez, who previously cooked at The Nomad Los Angeles. “The guests love it. They understand it. I think that’s how I can have fun and kind of bend the rules a bit.”

A spread from Soulmate.  Photo: courtesy of Katrina Fredrick

Lopez was bummed when The Bazaar by José Andrés at SLS Beverly Hills closed last year. He knows that The Bazaar was a more avant-garde restaurant, a destination that celebrated molecular gastronomy. But what he clearly appreciated about The Bazaar was its devotion to Spanish flavors and its uninhibited cooking. That’s the kind of vibe he wants to channel at Soulmate.

Lopez has noticed that customers respond well when he adds a new Spanish-inspired dish like gambas al ajillo made with wild blue shrimp from Mexico. He loves seeing guests scraping the bottom of paella pans. He’s serving vegetable fideuà and seafood paella, and customers are clamoring for more. So Lopez is planning to add a meat paella with chorizo and chicken.

Soulmate is already selling about 50 orders of fideuà and paella combined each night. These are FOMO-inducing dishes. A pan drops at one table and nearby tables realize they want one of their own.

Along with other L.A. newcomers like Angler, Damian, Found Oyster and Crudo e Nudo, Saso is making a spectacle with premium seafood.

“We know that our backbone is seafood and coastal cuisine, and we are putting the best seafood that we can possibly get on the plate,” chef Dominique Crisp says of Saso.

Crisp describes the charcoal-powered Josper oven at his Pasadena restaurant as “essentially a $16,000 Weber grill” that he’s able to keep at 600 to 700 degrees throughout a busy dinner service as he cooks spot prawns, clams, whole fish and wagyu tomahawks.

Forging bonds with suppliers like Weatherly Bates of Alaska Shellfish Farms, Crisp gets seafood—largely from California and the Pacific Northwest—by tapping into long-time relationships he developed when he cooked at L&E Oyster Bar and Blue Plate Oysterette. Meals at Saso can start with chilled Santa Barbara stone crab claws and raw Hama Hama oysters before a luxurious plate of duck-egg-yolk pasta loaded with fish and shellfish.

Saso’s staff goes out of its way to tell customers about how seafood is sourced. And sometimes, guests even bring in their own fish.

“One of our best regulars came in and he had just caught bonito in Baja,” Crisp says. “He unloaded two large bonito on me. The next day, we did a bonito crudo special and the team told customers how we got the fish. It sold out in an hour. That’s the power of the story. Good stories sell.”

The story at Saso even extends to the sustainable charcoal inside the Josper. Crisp gets charcoal from Prime 6 (a startup you might have seen on Shark Tank), which is committed to planting a tree for every pack of charcoal it sells.

“They also use super high-quality, like essentially sawdust to make the charcoal,” Crisp says. “They compress it. So you have this amalgamation of tons of really amazing wood. That mix of wood adds crazy good flavor to all of the food while the charcoal burns extremely hot because of the density.”

It’s a good metaphor for what’s happening at Saso overall. Crisp respects old cooking techniques and says that a lot of what he’s doing is about restraint, but he’s also a forward-thinking chef who loves trying new things.