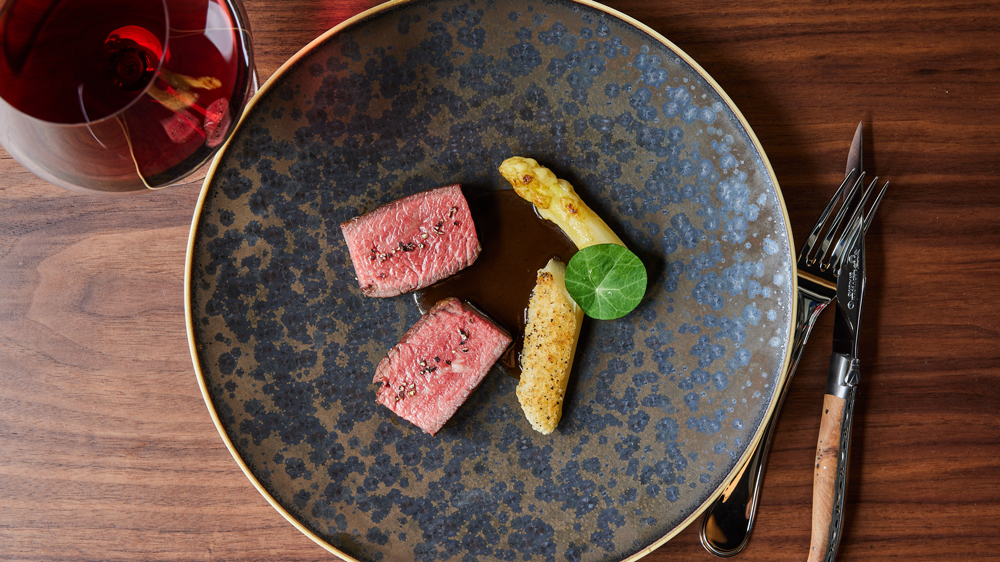 If you want a Michelin-quality restaurant in your neighborhood, sometimes you just have to build it yourself. That’s what a group of neighbors in Tribeca did with L’Abeille, a new French restaurant that opened last week at 412 Greenwich Street.

L’Abeille is helmed by internationally acclaimed executive chef Mitsunobu Nagae, who, until very recently, had been working under the banner of Joël Robuchon in Tokyo, Paris and New York. The Tribeca group recruited the chef and rallied behind him, getting investors for the restaurant, Nagae’s first solo project, and honing the concept, which they call “bistronomy.” It straddles the line between casual bistro and haute French gastronomy; fine dining that you can enjoy on a weeknight.

“The idea is you have the pedigree, you have people [in the kitchen] who have the technique and the cooking skills, but it’s a much more relaxed environment,” Nagae said through a translator. “It’s a less stuffy atmosphere; you don’t have to put on a jacket to go eat. People are very comfortable but still getting a very elevated experience.

“My background is drawing a lot of customers. My Robuchon regulars are coming in and some of them have come in multiple times in the past week.”

The name L’Abeille translates to “the bee” in French; the chef’s name, Mitsunobu, comes from the word “honey” in Japanese. Born in Japan, Nagae trained in Lyon, France, and then worked in Michelin three-star restaurants in France including Régis et Jacques Marcon and Le Doyen. He also worked in Michelin three-star Château Restaurant Joël Robuchon in Tokyo, and even more Michelin-starred establishments such as Paris’s e.t.c., Tokyo’s L’osier and New York’s L’Atelier Joël Robuchon.

Most recently, Nagae was chef de cuisine at Alain Verzeroli’s Shun in Midtown, which has yet to reopen from its pandemic shutdown. At the time, Nagae was seriously considering returning to Japan. But one of his regulars, Rahul Saito, approached the chef with a proposition.

“Just out of a pure desire to help, I asked him to cook for my family once a week and down the road for my friends, at our apartment,” Saito, who also served as Nagae’s translator for this interview, said. “That’s how it all started. He cooked for us for several months and we started discussing how he creates dishes, how the costs work, everything else. And ultimately, the question was, ‘Would you like to do something on your own?’ And that started this endeavor.”

Saito and his Tribeca neighbors pushed for Nagae, and he is grateful for their support. He hadn’t wanted to leave New York, a place where he had honed his own voice while executing the visions of other great chefs. And he said diners’ palates are much more complex in New York than elsewhere in the world where he has worked.

“In Japan or France, people are accustomed to just eating Japanese food or French food,” he said. “Here you have people from Latin America, Europe, Asia, all over the world, which creates a uniquely diverse taste palate. People are also very open-minded to different tastes. I thought people here would only want steak! I have learned a lot from the food scene since I landed in New York in 2017.”

The diversity he’s been exposed to in New York—through the wide variety of restaurants he’s dined at and his experience working in New York kitchens—is also influencing the menu at L’Abeille.

“The biggest influence is my co-workers who I’ve worked with so far,” he said. “Some people are from Mexico, Paraguay, Russia, all sorts of places. And when you’re in the kitchen, they come up with very interesting ideas. I’m listening to that, thinking about using that ingredient, thinking about what will match with what, how can that spice be used, how can you modify a cuisine’s traditional sauce and make it a delicate French sauce?”

The starting point of every dish is French—the technique, the way stock is made, the way produce is cooked. Then the chef adds his own twist when he feels it is appropriate. For example, he’s preparing a foie gras torchon with caramelized mango and spicy chutney. His bouillabaisse includes pan-fried American tilefish. And his squab (sourced from California) is smeared with miso paste, grilled over binchotan (Japanese charcoals) and drizzled with a bourbon-chocolate sauce that’s inspired by Mexican mole.

He’s also giving his mentors a nod on his menu, specifically, with his lobster dish.

“In the French culinary world, there is a tradition of modifying a dish from one generation of chefs to the next,” Nagae said.

In Chef Alain Passard’s original version, the lobster was poached à la minute and was served with a honey dressing. Then Chef Alain Verzeroli modified the concept, turning it into a turnip-lobster ravioli. Nagae’s take includes lobster standing on its own, surrounded by buttered turnips, a honey-vanilla sauce and a citrus mousse.

His desserts include fresh strawberries and lychee with rose and shiso leaves, and chocolate sorbet with hazelnuts. The beverage menu highlights French wine and cocktails.

The dining room seats 54 and includes banquettes upholstered with green velvet, antique brass light fixtures and a marble bar that peeks into the kitchen.

For the opening month, to get diners accustomed to the taste palate chef is working with, L’Abeille is offering six-course and four-course prix fixe menus. At the bar, they are also offering an à la carte menu.

Dishes will rotate frequently and correspond to the seasons. Lunch will eventually be added as well. But Nagae has his eyes set on something else in the future.

“Obviously, as a French chef, Michelin is something that is on the horizon,” he said. “That said, the cooking and experience of the restaurant is not specifically to target Michelin. Michelin will come when it comes. It is definitely an ambition, but that is not what we are working for.

“I really want this to be a place for not only excellent food, but also excellent service and a very warm and cozy and sophisticated, elegant experience. I want it to be an experience that can be repeated frequently, even on a weekly basis. That’s what we are trying to really achieve here.”