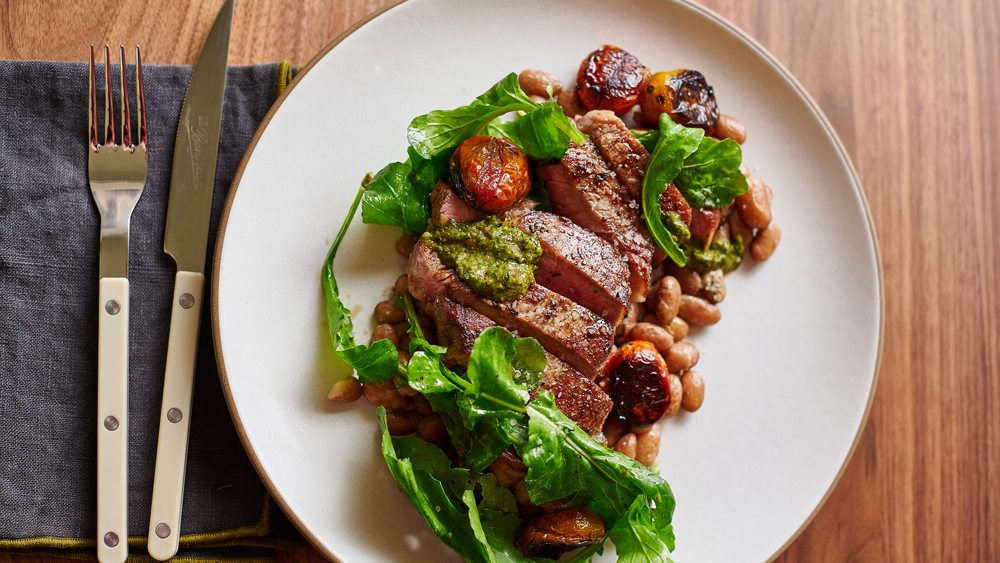 It’s easy to forget that you’re in Atlanta when dining at Le Bon Nosh. The all-day cafe recently opened its doors in the Buckhead neighborhood, an area known for its corporate aesthetic. In contrast, chef Forough Vakili’s elegant restaurant and market is highly personal to her, infused with global elements that she felt were missing in Atlanta. “I wanted you to walk in here and be transplanted into any other city and country of your own imagination,” Vakili says.

To accomplish this, Vaikili worked with LA-based design firm Commune to transform the 6,300-square-foot storefront with 25-foot ceilings into three sections on the main level. The center section is anchored by an open kitchen that puts a custom La Cornue range front and center along with a butcher block counter that will eventually be used for cooking classes. There’s also a pastry case filled with impressively layered croissants and hazelnut financiers, among other treats.

“One of the things I wanted was to create a place where you could have a completely different experience based on where you are sitting,” Vakili says. One dining room in the restaurant is convivial with custom-designed oak communal tables. “It’s more about that hustle bustle of the market. I intentionally did that, so if you’re sitting on that side, it’s more like being part of the community,” she says.

The other dining area, where the wine bar is also located, is elegant and intimate. The room is ensconced in saffron-hued curtains made with repurposed cheesecloth and dyed by Argentine artist Mariana Pussacq of Casa Almacén. Vakili’s childhood was spent on a saffron farm in Iran and these curtains pay homage to that piece of her life. “I very much emphasized the fact that I feel like my whole journey since I left Iran to the point where Le Bon Nosh was built and opened, it’s been somewhat of a puzzle kind of getting put together. And I felt like every experience, every place I’ve lived or every encounter that I’ve had has had an impact in putting this project together at its current state,” says Vakili.

The crystal Woka lighting fixtures are another striking detail that are an homage to when Vakili lived in Vienna after leaving Iran. A painting of the Brittany Coast by Tyler Hays hangs over the bistro tables as a reminder of her time in France. Upstairs is a dining room, with hand-painted wallpaper by De Gournay, that can be used as a private space.

Regardless of where one chooses to perch in Le Bon Nosh they can enjoy Vakili’s vegetable forward dishes. Whether it’s a French lentil salad or a squash caponata tartine, Vakili’s goal is to let locally sourced ingredients shine. “I feel like often vegetables are not given enough of a limelight and they’re always considered a side thing,” Vakili says. One of the farmers she works with teased Vakili about the 250 pounds of turnips she ordered. “We’re teaching people to eat turnips and not just look at them and wonder what are we going to do with them. We’re roasting them, we’re mandolin-ing them and then putting them in salads, every which way,” Vakili told the farmer.

The recently launched dinner service offers dishes like marinated olives, gougères with Serrano ham and family-style entrees such as whole fish prepared in the wood-burning grill. There are also nods to her Persian roots on the menu, like cardamom cake and chicken marinated in saffron and yogurt.

Though Vakili seems comfortable in her role at the helm of Le Bon Nosh, restaurant ownership wasn’t a goal she had until recently. Vakili moved to Atlanta to finish high school in 2000 and went on to get a degree in chemical engineering from Georgia Tech. Unfulfilled in her career and debating whether or not she should go to law school, she pulled up the website for Le Cordon Bleu Paris and nine months later, she was enrolled as a student there. After graduating culinary school she staged at L’Auberge de Glazicks. When Vakili came back to Atlanta, she worked as a culinary consultant for Porsche Cars North America and Bon Appetìt Management Company.

Le Bon Nosh was a project two years in the making. Vakili chose Buckhead as her landing spot to break up the monotony of chain restaurants. And now that it’s here, she isn’t slowing down. “The bigger picture for the concept is to expand and to have multiple locations nationwide,” she says.

For now, she’s happy to give Atlanta a transportive space. “That’s exactly the idea. Really, just taking you out of your day to day and giving you a little moment of going back. I think that’s special.”