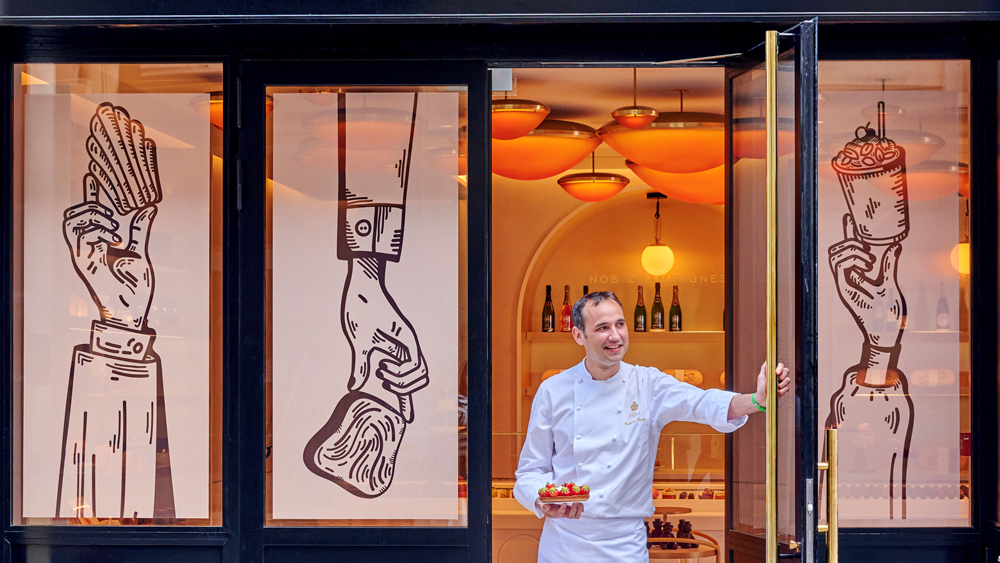 On a wooden tray that’s just been set on a marble tabletop inside the sumptuous F. Scott Fitzgerald suite at the Ritz Paris hotel, lies a trio of long, slim, oblong-shaped pastries that look vaguely familiar.

Tightly gathered, accordion-like pastry sheets fold neatly onto themselves, resembling the edge of a closed book. One oozes a red berry jam on both ends, another is likewise filled end to end with chocolate. All three sport a sun-baked, caramel color tan and have a flaky appeal.

But none are immediately identifiable from within the classic French pastry repertoire.

“We put a lot of thought into this,” says Ritz Paris pastry chef François Perret, who is giving a preview of his new collection. “The recipe has stayed the same. It’s still crispy and tender, but it’s just much more practical to eat. So we decided to keep the name.”

That name, would be the croissant.

Perret’s reinvention of the most iconic of French pastries, the croissant, is part of a larger project at the Ritz Paris hotel that includes the opening of a new luxury, gourmet pastry shop; an attempt to modernize dessert culture in Paris; and the “democratization” of the gourmet  experience along with the luxury Ritz brand.

Because when the Ritz Paris Le Comptoir opens on rue Cambon a few streets over from the main hotel entrance at Place Vendôme, it will open, less as a sit-in tea salon (there are only five tables) and more as a takeaway boutique, where customers can buy gourmet croissants, sandwiches, madeleines and strawberry cheesecakes at reasonable price points, to-go.

“France is the temple of the pâtisserie, and we’re in a city that was made for walking. I thought it just made a lot of sense to develop desserts you could eat while strolling through Paris,” he says.

That’s where the reimagined, oblong, cigar-like croissant comes in.

During the lockdown in Paris, when the hotel was closed and he could turn his focus entirely on  the opening of the boutique, Perret’s new morning routine was to grab a croissant and coffee and sit down at his computer to check on his emails. He quickly realized what many a French office worker learns early in their desk life.

“There were crumbs everywhere, on the keyboard, on me. It was carnage,” he says. “I said to myself, ‘there has to be an easier way to eat this.’”

Along with being a more portable version of the croissant, Perret’s version was also developed to reduce as much crumb wastage as possible. The trade-off is a slightly denser texture, for a more user-friendly format. With the longer, oblong shape, his pain au chocolat does what few traditional pains au chocolat do: contain a generous amount of chocolate with every bite, end to end. And just as the classic croissant has evolved from a crescent, half moon to the contemporary diamond shape it is today, Perret says his version is simply an adaptation of modern consumer habits.

With the new menu, Perret will also introduce Parisians to a concept Americans know well, but that is still relatively uncommon in France: les boissons pâtissières or dessert drinks. The trio of flavors is described as the drinkable, takeaway form of his signature desserts—madeleines, marble cake, and “barquette” caramel.

They too are meant to be sipped while strolling leisurely through the city, or at the Jardin des Tuileries a short walk away.

And while it may be assumed that the idea to open a takeout pastry shop is the result of the pandemic, Perret says the concept predates Covid-19 and was more influenced by his short stint spent in Los Angeles in 2019 where he shot the Netflix series The Chef in a Truck.

In two weeks, Perret was given a crash course on the LA street food and dessert scene through locals like Teddy Vasquez of Teddy’s Red Tacos, Courtney Cowan of Milk Jar Cookies and Jason Neroni of The Rose Venice, before he opened his own pop-up selling desserts out of a food truck.

It was in LA that he came to understand the culture of street food and the pleasures of eating with your hands.

“I learned that eating with your hands makes you more connected to your food,” he says. “It’s completely different from eating with a spoon, which comes between you and the plate. When you eat with your hands, it’s much more symbiotic.”

But while eating with your hands and drinking from a takeaway cup may be commonplace in North American culture, as Marc Raffray, general manager of the Ritz Paris points out, Le Comptoir was conceived first with local Parisians in mind. And that includes those of more modest means than the traditional Ritz clientele, he says.

“Our goal is to make it accessible, all while staying faithful to the Ritz image, but without giving the impression that it’s only accessible for the ultra-rich.”

Price points for single pastries, cakes, drinks and sandwiches range from 3 to 13 euros.

The edict falls in line with a new vision and strategy for the hotel. That is, to revitalize the brand and endear the hotel—which in its heyday was frequented by Marcel Proust and Coco Chanel and was the center of Parisian social life—to locals once more.

“The idea is that people can take a bit of the Ritz home with them,” says Perret.

There are savory treats as well.  Photo: courtesy Bernhard Winkelmann

A click and collect station will allow customers to pick up pre-orders for the home, the office or to share with family and friends. And Perret revisited his signature madeleine recipe served at the hotel’s Salon Proust to create a travel-friendly sponge cake that stays fresh for up to five days.

Though the first boutique has yet to open, the Ritz is currently shopping for a second Paris location. The idea is to develop Le Comptoir into an international brand with locations around the world, as well as in luxury department stores and airports.

Ritz Paris Le Comptoir follows the lead of other luxury hotels such as Le Meurice and the Mandarin Oriental Paris, which also have standalone takeaway pastry shops.

Le Comptoir opens June 7 at 38 rue Cambon. France is set to reopen to vaccinated US tourists as of June 9.