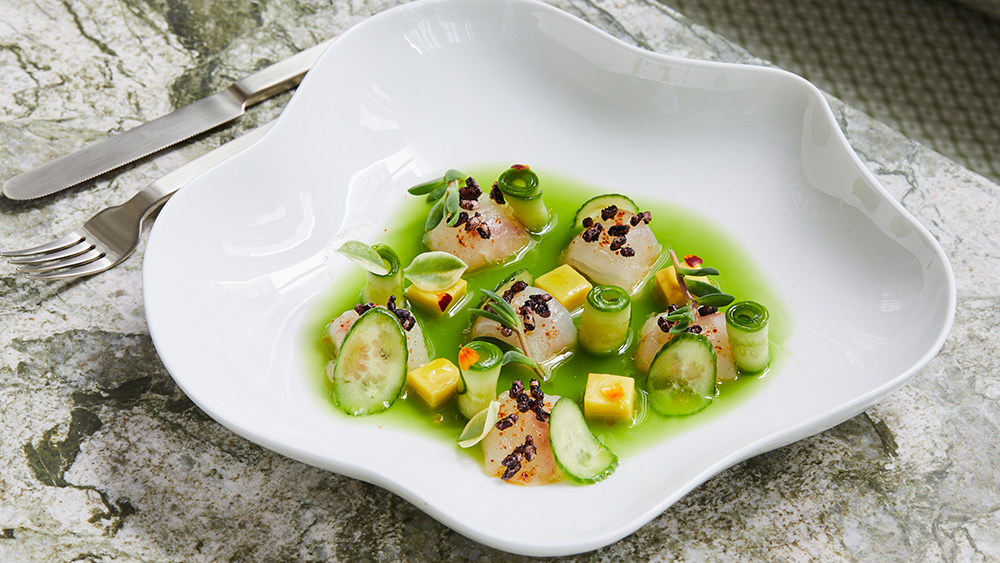 Michelin-starred chef Alain Verzeroli is making his mark on Midtown Manhattan. He opened Le Jardinier in the newly unveiled Norman Foster-designed Midtown residential tower last month, serving seasonal cuisine laden with vegetables in a refreshingly light and airy space filled with greenery (not typical for Midtown). Later this month, he opens Shun on the second level, which will offer contemporary French cuisine with Japanese influences, and an expansive and stylish bar and cocktail lounge.

Located at the busy intersection of Lexington Avenue and 53rd Street, Le Jardinier is a welcome reprieve from Midtown’s madness. And the menu matches the sublime décor. Verzeroli, a longtime protégé of the legendary chef Joël Robuchon, who passed away last year (Robuchon’s restaurant group Invest Hospitality is running the project), created a menu where local vegetables, herbs and fruit are the focus, but this isn’t a vegetarian-only menu. It also offers wild and sustainable fish, meat and poultry dishes. The menu seamlessly blends healthy ingredients in sophisticated and sometimes decadent dishes. The signature plates include a colorful mix of heirloom tomatoes, stone fruits and burrata, and a succulent Bavette Au Jus with turnips, broccolini and horseradish.

Verzeroli enlisted master baker Tetsuya Yamaguchi to deliver a tempting assortment of gluten-free breads, including rolls made with Japanese rice flour and seeded lavash made with red and white quinoa, matcha powder, Japanese shichimi pepper, and topped with sesame and poppy seeds. Pastry chef Salvatore Martone’s colorful fruit creations blend the best seasonal produce with a mix of herbs and sometimes savory flavors, such as the lemon meringue tart with citrus marmalade and warm rhubarb pie with rhubarb buttermilk sherbet shaped in flowers. Equally as tempting is the cocktail menu with libations like the Citron Presse, a mix of Charbay Meyer Lemon vodka shaken with lemon juice, fresh shizo leaf and yuzu bitters. Finishing off the meal, Le Jardinier’s fresh herb cart comes table side with infusions of mint, verbena, rosemary and more to create custom-blend fresh teas.

Like the menu, the space is a refreshing and unique proposition for Midtown Manhattan. Designed by award-wining French architect Joseph Dirand, it’s light-filled with floor to ceiling windows, green-marble walls and floors, and lush greenery. It’s the first restaurant in the US for both Verzeroli, who most recently helmed culinary operations at Château Restaurant Joël Robuchon in Tokyo (during his tenor it garnered three Michelin stars annually for 11 years), and Dirand.

Vegetables are made savory and delicious  Photo: Nicole Franzen

Le Jardinier is already being touted as one of the Midtown’s hot new eateries, and its healthy fare ticks all the boxes that people increasingly want today—gluten-free, vegetarian and organic options, and sustainably sourced meat and fish—yet they don’t have to sacrifice taste or a luxurious dining experience to get it.

It is a welcome reprieve from the Midtown madness  Photo: Adrien Dirand