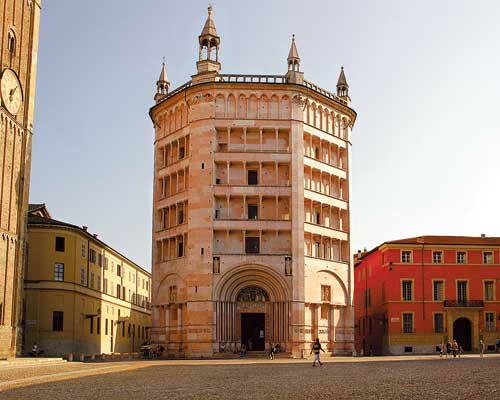 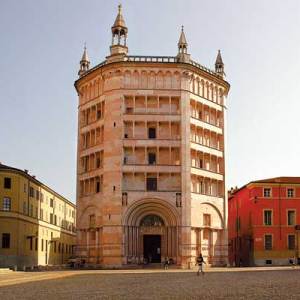 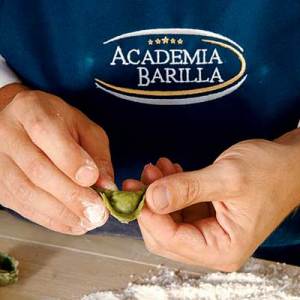 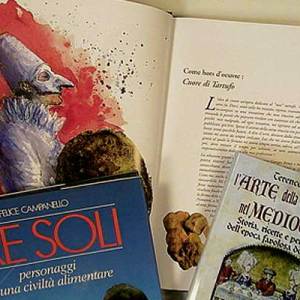 The children’s toys scattered on the lawn outside the Santo Stefano dairy’s office present the first indication that this establishment, located outside of Parma, Italy, is different from an industrial cheese-making facility. Further evidence is offered by the living arrangements of the dairy master, who resides on site with his family, many of whom work alongside him. If any doubt remains concerning the artisanal nature of Santo Stefano, it is addressed by the whey room’s ceiling, under which the milk is steamed every morning in gleaming copper-lined vats. The ceiling is decorated with a fresco that depicts a saint giving bread to the poor, and above the image is the Latin phrase In labore requies, “In toil, rest.”

Santo Stefano follows the classic Parmigiano-Reggiano recipe of blending full-fat milk harvested in the morning with milk that is collected in the evening and skimmed, adding rennet and salt and nothing else, and allowing the wheels to age for at least one year. Dairy employees constantly check the thousands of wheels maturing in the storeroom, but the cheeses are not officially Parmigiano-Reggiano until a year passes and someone from the local dairy consortium inspects them and declares them as such. The inspector strikes each wheel with a hammer and listens. If he hears a hollow, drumlike sound, it suggests that an air bubble has formed inside the wheel. The cheese is still edible, but it is not Parmigiano-Reggiano, and the inspector carves the mark of failure into the rejected specimen with horizontal pinstripes that encircle its rind from top to bottom. By conveying an even, compact, full-bodied sound, a cheese will pass the test and earn the right to wear the oval Parmigiano-Reggiano stamp, which the inspector applies with a hot iron brand.

Academia Barilla, a culinary institute founded in Parma last spring to promote authentic Italian food, sends its guests to Santo Stefano so they can observe how Parmigiano-Reggiano is made. The institute’s stewards hope that, by introducing people to the genuine article on its home soil, they can raise culinary awareness and prevent incidents such as the one that Academia Barilla Director Gianluigi Zenti experienced a few years ago in New York. Zenti, who speaks fluent English, was head of U.S. operations for the Barilla company at the time. When he visited a gourmet shop and requested Parmigiano-Reggiano, the grocer presented a sample of cheese that he described as “extra, extra quality, 3 years old.” Its rind was marked several times with the letter X, including one that covered the logo of the Parma cheese-producing consortium. The X, Zenti explains, was the symbol that the consortium had used to denote rejected Parmigiano-Reggiano before it adopted the horizontal pinstripes. “The store bought the product from an importer and sold a low-quality cheese as a high-quality cheese,” Zenti says, still incredulous. “[The grocer] said, ‘This is what people in Parma eat.’ It was uneatable; it was like a rock.”

Teaching people to distinguish Parmigiano-Reggiano and other examples of genuine Italian produce from the pretenders is one of the chief goals of Academia Barilla. “We want to be the source for authoritative information on Italian cuisine,” Zenti says. “We want to be the one to speak up and say what is really Italian and what is not. Nobody is really doing that.” Established and funded by the Barillas, the family that founded and continues to operate the food company bearing its name, Academia Barilla is located on the site of a former Barilla pasta plant in central Parma. (The factory moved to a new site just outside of the city in the late 1990s). Noted Italian architect Renzo Piano designed the main building, which houses a classroom large enough for 90 students and a portable kitchen with burners, a wok, and deep fryers. A smaller classroom is equipped with 40 cooking stations that feature splash-guarded plasma TV screens so students can watch and follow along with the teacher. The tasting room includes eight booths and a sophisticated lighting system that enables judges to view foods and beverages under ideal conditions. The facility also houses a wood-fired pizza oven made of brick, and a restaurant and a wine-tasting room are scheduled to open in the basement this spring.

Scheduled classes are offered year-round in English and Italian, and most run from two to four days. The curriculum includes fundamentals such as preparing pasta, sauces, and antipasto, but it also reflects the seasons. Gelato-making lessons are available during the summer, and a course on Italian holiday menus was scheduled for November 2004. Some classes are restricted to professionals, but many are designed for connoisseurs hungry for more knowledge.

Enthusiast-level evening seminars on seafood and on Italian first courses (primi piatti), taught in Italian in October 2004, each attracted more than a dozen locals who traveled directly from their office jobs to the institute. Roberto Carcangiu, a chef with 27 years of experience, conducted both classes. Charming and charismatic, he was in motion from the beginning of each lesson, calling students forward to peel tomatoes and chop garlic, revealing clever cooking tricks (such as simmering shrimp shells in olive oil, then straining out the shells and cooking fish in the infused oil), and ranting about his culinary pet peeves—all while watching his own pots and pans and removing them at the precisely correct instant. Plastic goblets of white wine accompanied the compulsory tasting of a finished dish. During one of these moments, when everyone was silently savoring their efforts, Carcangiu delivered a potent pearl of wisdom: “The most beautiful thing for a chef is for the plate to come back to the kitchen clean.”

Academia Barilla’s cupboards and refrigerators exclude Barilla products to reinforce its independence from the company, but the institute does offer its own line of branded goods, which is crucial to its mission. “We can explain how to cook Italian food, but if you can’t find the products you need to make it, you can’t understand the recipe,” says Enrico Scattolini, Academia Barilla’s training center manager. The line favors basics such as cheese, olive oil, Parma ham, and balsamic vinegar. “We selected the most important ingredients and focused on them,” Zenti says. In choosing the foods for its line, Academia Barilla contacted hundreds of restaurant chefs across Italy and invited them to Parma to blind-taste potential products from their respective regions. The items most well received by the chefs were included. Later this year, Academia Barilla will offer the foodstuffs through its web site.

Its food line may prove an effective educational tool, but Academia Barilla officials prefer to enlighten visitors through individualized tours that allow them to explore their interests in depth. Professionals can request a crash course in opening an Italian restaurant, while chefs who like to marinate themselves in the history of cuisine can research antique recipes in the institute’s 6,500-volume library and taste-test them in its kitchens. Connoisseur tours are usually broader in scope, combining cooking demonstrations and culinary seminars with trips to places such as Santo Stefano, dinners at local restaurants, and tastings of cheese, wine, balsamic vinegar, and olive oil. A walking tour of Parma, a visit to composer Giuseppe Verdi’s villa in Sant’Agata, and other cultural excursions are often included, as are pauses for spa treatments and stops at the Ferrari museum in Maranello and other quintessentially Italian attractions. A new hotel located directly across from the Academia Barilla building accommodates the school’s guests, and a helicopter is employed for far-flung itineraries.

Americans are Academia Barilla’s target audience, says Zenti, because they are likely to be misinformed about Italian cuisine and seem eager to be educated. “Even knowledgeable Americans do not have the cultural information,” he says. Scott Conant, executive chef and owner of L’Impero in New York, spent three months in Italy learning how to cook genuine dishes before he opened his establishment, which won the James Beard Foundation’s best new restaurant award in 2003. He agrees with Zenti’s observation about Americans’ misconceptions. “Listen, every day I must fight the perceptions about Italian food,” Conant says. “Last week, someone walked in and asked for pizza. There’s nothing wrong with pizza, but we’re a three-star restaurant. It’s not what we do. And if one more person asks for meatballs, I’m going to strangle them,” he says, laughing. Conant, who attended Academia Barilla’s opening ceremonies, believes that the institute has arrived at the right time. “I think [the demand for authentic Italian cuisine] is better than it was five years ago, and five years from now, it will be better than today,” he says.

The initial success and positive reception raise the question of why an institute dedicated to Italian cuisine was not established until now. The answer, according to Zenti, involves the nature of the country.  “We don’t have Italian cuisine or restaurants, we have local cuisine and local restaurants,” he says. “Italy is one of the few countries in the world that is so fragmented. Lombardy [an area in the north] has at least 20 different cuisines within one region. That’s the beauty of it.”

This fragmentation is rooted in the history of Italy, which has been a country only since 1861 and has had a true national language only since the middle of the 20th century. In fact, Italians still speak at least 14 different dialects. Moreover, the cuisine remains strictly regional, with most Italians rarely venturing beyond their culinary backyards. “I’m always taken aback that I can drive 30 miles and encounter dishes that they don’t do 30 miles away,” says Conant.

Italian chefs contribute to the fragmentation by learning their trade through apprenticeships in local kitchens. Because it is rare for a budding chef to relocate during the climb up the career ladder, few receive the opportunity to master the cuisines of other regions. Also, Italy has no nationally recognized culinary school equivalent to the Culinary Institute of America (CIA) or Johnson & Wales, where a student-chef could encounter other styles of Italian cooking. Academia Barilla is not designed to be that school. As previously noted, it is intended primarily to educate Americans who tend to dine adventurously and who are willing to put their money where their mouths are.

The institute’s educational outreach strategy includes off-campus activities. In addition to offering its product line of Italian basics, Academia Barilla holds events in America and recently partnered with the Zagat Survey to release a guide to the best Italian restaurants in the United States. But those activities are meant to whet Americans’ appetites  and encourage them to travel to Parma and taste for themselves. “We think it is important to come to Italy to truly understand and see where the product was born,” Scattolini says.

Zenti, Scattolini, and their Academia Barilla colleagues are confident that their mission, while daunting, will succeed. “Ninety percent of the people I meet don’t know the real thing, and it’s rare to encounter someone who [tries both and] prefers the fake,” Zenti says. “The more you train your palate, the better off you are. You must eat even the smelly cheeses. If you discover that you don’t like them, at least you are aware of why you don’t like them, and why they smell.”