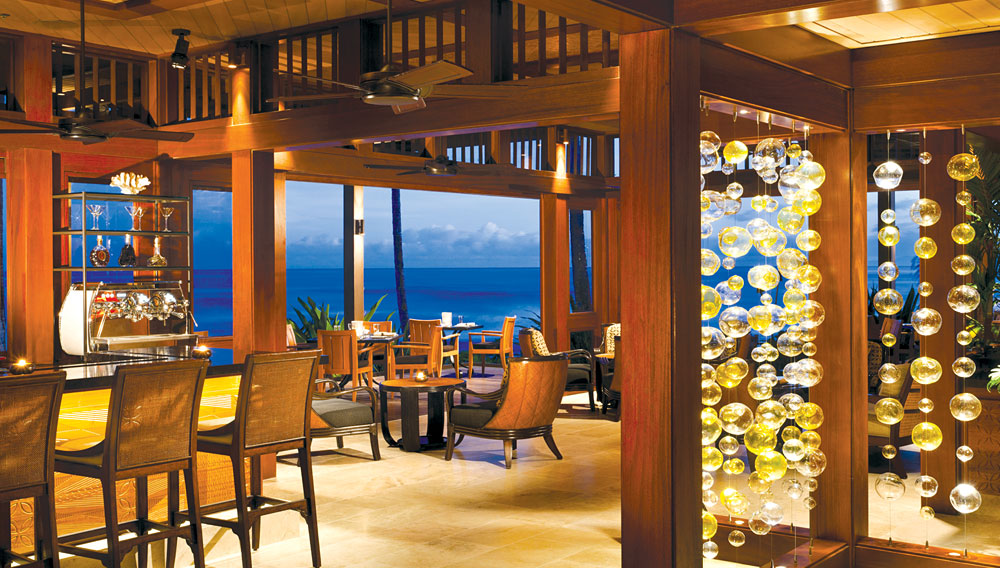 That is the question on the lips of five dozen farmers gathered for the third growers’ symposium organized by James Babian. A chef on the Kona Coast of Hawaii’s Big Island for more than 15 years, Babian is a big reason many of these farmers can stay in business. For some, he is the reason they are in business at all.

“When I first came to Hawaii, you could buy local lettuce, some fruits, and that was it,” Babian says. But in 2007, when he became the executive chef of the Four Seasons Resort Hualalai, Babian made local sourcing the foundation of his cooking. By creating a stable, substantial demand, he helped the Big Island’s agriculture bloom. In the process, his List—a catalog of produce he wanted for his menu—started determining exactly what was being planted in the fields. If he needed a particular type of berry, he asked a farmer to try growing it. And now he is about to hand out the List.

Once everyone is settled at communal tables with plates of barbecued pork, red and gold beets with crumbled goat cheese, and grilled grass-fed rib eye with slices of black radish, Babian passes around the List. “If you grow it, we’ll buy it,” he says of the more than three dozen fruits, vegetables, and mushrooms that he has had to order from the mainland but would rather not. “There’s a real opportunity,” he cajoles the crowd. “Somebody could get rich growing green and red peppers in Hawaii.”

The farmers buzz as they scrutinize the single sheet. “I don’t think we have the elevation for pears and apples,” says Paul Johnston, owner of Kekela Farms, to Joey and Donna Mah, “but we could try some asparagus. How’s that working for you?” The Mahs own J&D Farms and specialize in flowers, but Babian coaxed them into cultivating asparagus. Four Seasons purchases nearly their entire crop of the vegetable—or at least the portion not reserved for Babian’s new restaurant on the island.

Babian left the Four Seasons last summer to open Pueo’s Osteria, an Italian farm-to-table restaurant where local products make up about half the menu. “One of our biggest-selling dishes is wild-boar pappardelle,” he says. “We braise local wild boar and serve it with braised Kekela Farms kale and toss it with homemade pappardelle noodles.” Babian always offers a crostata on the dessert menu. “But instead of using a mainland peach, I use a local mango,” he says. “I think mango is an upgrade on the peach anyway.”

Babian’s locavore approach is leading a new wave of Hawaiian dining. A generation ago, Alan Wong, Roy Yamaguchi, Peter Merriman, and others unshackled fine dining in the islands from a slavish imitation of the French kitchen. Calling their approach Hawaiian regional cuisine, they featured Hawaiian products and flavors but did not address the issue of sustainable local agriculture. The juicy local ahi steak on the plate was, more often than not, surrounded by vegetables shipped from California because the chefs had no real alternative. Today, Hawaii still imports 75 percent or more of its food.

That does not suit Babian. Last November’s chef-farmer symposium at the Four Seasons also marked the opening of the hotel’s fine-dining venue, Ulu Ocean Grill and Sushi Lounge. Ulu’s opening menu began with the List—and the current menu still does.

The List is justifiably a source of pride for the chef and his former restaurant. The Hawaiian Islands may be lush, but they are inhospitable to most nonnative food crops. Apples and pears, for example, require dormancy enforced by at least 800 continuous hours of temperatures below about 40 degrees, and they can only be cultivated high on the mountainsides—where cloud cover can stunt the trees. Other nonnative crops like peppers and tomatoes are susceptible to fungi and nematodes that thrive without a winter freeze to keep them in check. Moreover, farmers constantly have to supplement the volcanic soils with key nutrients and contend with periodic “vog,” an atmospheric haze of volcanic ash that blots out the sun.

None of that has deterred Babian’s enterprising farmers. A few years ago, Mike Hodson retired from being a narcotics detective to raise tomatoes under plastic-covered hoops in the Waimea Homelands (similar to a Native American reservation on the mainland). Early on, he asked Babian to critique his crops. “More acid,” Babian told him, “and slightly more sugar.” Hodson kept tweaking his drip of organic nutrients until he was growing perhaps the planet’s best-tasting tomatoes, aptly dubbed Wow! The Four Seasons and Pueo’s Osteria get the top of the crop. Meanwhile, Hodson’s backyard venture has expanded: Wow! tomatoes now grace the plates in every high-end-resort dining room on the island—and many of the best restaurants in Honolulu on Oahu.

Babian’s success at the Four Seasons—the resort still obtains 70 percent of its produce from local growers—has influenced other restaurants on the island to buy more local food. Johnston and Betsy Sanderson operate the 11-year-old Kekela Farms in Kamuela, where they raise more than 100 varieties of 30 different vegetables on the north slope of volcanic Mauna Kea. In addition to selling at farmers’

markets and to the Four Seasons and Pueo’s Osteria, Kekela Farms now directly supplies produce to the Fairmont Orchid and Hapuna Prince hotels. One of the farm’s newer customers, Johnston notes with pleasure, is Three Fat Pigs, which chef Philip “Ippy” Aiona of Food Network Star fame opened in Waikoloa in March.

Babian believes that visitors to the islands care about local sourcing. “They’re well-traveled and much more interested in where their food comes from than ever before,” he says. Many of those visitors are surprised to see just how local the supply can be on the Big Island. The Four Seasons buys and dry-ages whole grass-fed beef from Kulana Foods in Hilo; at Pueo’s, Babian procures whole-aged forequarters, usually just before he launches a special on strip steak.

Constructed in the 1970s to generate electricity from the temperature difference between deep-ocean and surface waters, NELHA no longer makes power. But it has found a new purpose in supplying pure seawater from different depths and of different temperatures to commercial tenants. Kona Cold Lobsters, for example, uses icy deep water to hold lobsters that they fly in from Maine, nurse to optimal strength and size, and then distribute throughout Hawaii and across the Pacific. Big Island Abalone runs a 10-acre aquafarm to raise Japanese northern abalone for markets in the United States, Japan, and Canada. Other operations raise black cod, sea vegetables, a Japanese flounder called hirame, and cold-water oysters. One company has a nursery for kampachi, a tuna-like yellowtail, which it raises just offshore.

“Almost every self-respecting restaurant on the island, and on Oahu, too, uses fish from NELHA now,” Babian says. “We bought the first aquaculture products and the operators would ask us, ‘What else would you like to see?’ And we told them. The kampachi is just an incredible success story—one of the most versatile and delicious fish in the sea. Now they’re working on farming giant grouper.”

At the Four Seasons, Babian also started Saturday-night farm-to-table dinners that he would personally cook at a table-side kitchen. Since his departure, Nick Mastrascusa, the executive sous-chef, has taken over the theatrics. Mastrascusa and another chef spend Saturday mornings foraging at the two Waimea farmers’ markets for foods with fleeting seasonality, like raw ˉohi‘a le hua honey that might be caramelized to top a chocolate tart made with locally grown cacao. They will likely buy freshly dug ginger, turmeric, and galangal for a Big Island curry to accompany steamed mussels. Chances are, they will run into Babian as he scores a few perfect strawberry mangoes or some pristine greens for his Kekela Farms market salad.

When Vikram Garg arrived in 2008 as the executive chef at the Halekulani hotel, he was already steeped in a world of flavors. Trained in French, Mediterranean, and Southeast Asian cuisines, Garg infuses the contemporary French menu of the Honolulu property’s La Mer restaurant with a spice profile from the palace kitchens of India. Island flavors dominate the seafood-oriented menu of the hotel’s Orchids, where NELHA lobster and abalone feature prominently. Garg has championed locally grown hearts of palm and is such a fanatic about spices that he has contracted growers to provide him with cinnamon leaf, peppercorns, and turmeric. He buys many of his vegetables from Molokai because the island is a bastion of GMO-free agriculture, a cause dear to his heart. To truly sample his personal style of “locally inspired global cuisine,” it is worth booking table 1 at Orchids, where up to eight diners can enjoy a five- to seven-course tasting menu. Halekulani, 808.923.2311, www.halekulani.com

Ed Kenney, First Lady Michelle Obama’s favorite Honolulu chef, calls his restaurant Town in suburban Kaimuki “an unpretentious neighborhood American bistro.” Kenney pays homage to the Honolulu culinary pioneers Alan Wong and Roy Yamaguchi, but goes his own way with a philosophy of “local first, organic whenever possible, with aloha always.” Casual fine dining for breakfast, lunch, and dinner relies extensively on local fish, vegetables from Ma‘O Farms on Oahu’s west coast, and butter and soft cheeses from Naked Cow Dairy. Kenney also buys a whole hog each week from Shinsato Farm, located in the tropical rain forest at the base of the Ko‘olau mountains. “The meat,” he says, “tastes like the air smells.” Town, 808.735.5900, www​.townkaimuki.com

For years, chef James MacDonald juggled Hawaiian regional cuisine at Maui’s Pacific‘O and more inventive contemporary farm-to-table cooking at the adjacent I‘O. Earlier this year, chef Anton Haines was brought on board to helm Pacific‘O. Both restaurants focus on fresh fish landed on Maui, like onaga and ehu (two snappers) as well as albacore and bigeye tuna. MacDonald’s not-so-secret weapon at both restaurants is O‘o Farm in the Maui up-country, where the restaurants’ other owners, Louis Coulombe and Stephan Bel-Robert, grow all the vegetables and herbs on the menus, and many of the fruits. They also grow and roast their own Maui coffee. Pacific‘O, 808.667.4341, www.pacificomaui​.com; I‘O, 808.661.8422, www.iomaui.com —D.L.

When the Japanese developer Takeshi Sekiguchi invested $20 million to open a single 32-seat restaurant in Honolulu, he had a simple goal: It would be the best restaurant in the world. Vintage Cave opened late last year in a catacomb-like space beneath the Ala Moana shopping center, constructed with 160,000 custom bricks and decorated with Picassos from Sekiguchi’s extensive art collection. The chef, Chris Kajioka, is a 30-year-old Hawaii native whose restless passion for perfection and innovation has included stints at such top-tier restaurants as Per Se in New York City. “My cooking follows a Japanese sensibility,” Kajioka says. “But we buy the best ingredients from around the world, whether it’s Iranian caviar, seafood from Tsukiji Fish Market in Tokyo, or microgreens from the Big Island.”

Vintage Cave offers two set menus. The shorter menu ($195) is six to eight courses of Kajioka’s signature dishes, such as a startling take on humble cabbage: He poaches the vegetable with butter sous vide, then caramelizes and chars it, adds a touch of dill and miso crème fraîche, and bathes the finished dish table-side in an anchovy-inflected bouillon. The $295 seasonal menu is a 10- to 15-course showcase of Kajioka’s creative use of seasonal ingredients in dishes such as carrot glacé with aerated guanaja, mascarpone mousse, lime, and a carrot crumble. “Every ambitious restaurant would like to be the best in the world,” he says. “That’s what you work toward in your sourcing, in the refinement of the food, and everything else.” —Christopher Hall