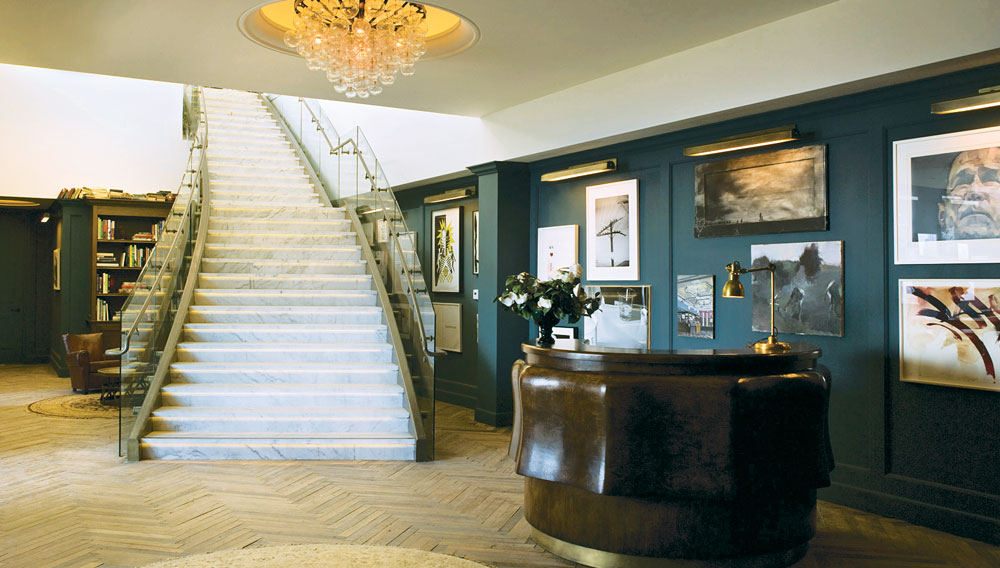 Private clubs used to mean old: old money, old members, old bastions of formality and hierarchy. But over the past 10 years, something has changed on the private-club scene: A younger, hipper breed of club is plugging directly into the life of a city. To be well connected in Hollywood requires a membership at Soho House, where the power crowd is so thick, networking gridlock breaks out on the grand entry staircase. In Seattle, being a dedicated locavore means belonging to a chic epicurean supper club called the Ruins, where some of the city’s celebrated chefs got their start. At the Core Club in Manhattan, a Midtown enclave of new and old money, hedge-fund honcho Anthony Scaramucci and real estate scion Beth Rudin DeWoody might collide over cocktails or a lecture by artist Jeff Koons. “Our members are already overscheduled and overstimulated, so we take the evening hours very seriously,” says Jennie Enterprise, who founded the bastion for Fortune 500 alpha types.

Needless to say, these are not your father’s crusty establishments: Venerable though it may be, the Harvard Club does not exactly pulsate on a Friday night. These clubs do, and surprisingly, their later hours are actually a throwback to the last golden age of private clubs, says Lisa Holton, author of For Members Only: A History and Guide to Chicago’s Oldest Private Clubs. “If you look back to clubs in the 1800s,” she says, “the clubs had hotel space and there were late-night activities for the guys—and back then, they were all guys.”

The best of the modern private clubs combine elements of the literary salon and the boardroom, a truly great dinner party and an even better after-party. They offer an exclusive experience that you will not find at a bar or behind a velvet rope. “We don’t harass people with bottle service and all that show-off stuff,” says Casa Tua owner Miky Grendene. “Our personnel know what our members want and have it ready for them as soon as they arrive.”

Getting In: The wait list is longer than the Mississippi at this location of the London-based club, and membership runs $1,800 per year (under-27 memberships are $900). Applications are being accepted, but be prepared to wait unless you are up for an Oscar or related to Brett Ratner. Nonmembers slip in by taking a meeting with an agent at Creative Artists Agency or William Morris Endeavor Entertainment. Both use Soho House as a hip boardroom.

Scene: First and foremost, Thursday is the hot night here. It is Hollywood high school, with a sun-drenched outdoor patio for a cafeteria and a tongue-in-chic bar with Chesterfield chairs and playing cards on display as the library. Nightlife is relaxed, with private parties for films and fashion brands bleeding into public areas. A black-and-white photo booth spits out shots glamorous and goofy that can be tacked on the wall. A 50-seat screening room with red-velvet club chairs feels very cabaret, circa 1940. The grand marble staircase in the entryway encourages dramatic entrances—and networking.

In Crowd: Hollywood power brokers, from producer Brian Grazer to Paramount CEO Brad Grey. Each night promises a few major Hollywood players, such as Kevin Huvane of CAA or Relativity Media’s Ryan Kavanaugh, dining or cocktailing. Around Oscar and Grammy time, the club is a veritable constellation.

Dress Code: Casual, of course—$100 T-shirts and cargo pants will do, but a well-cut sport jacket and dark denim is better. Women tend to show off bare shoulders and taut calves.

Getting In: You will need referral from a member—and an initiation fee of $50,000—to join, and annual dues run about $15,000. A personal introduction from a founding member like the Blackstone Group’s chairman Stephen Schwarzman should get the nod.

Scene: Forget dance floors and DJs; after-hours activities here are more highbrow. Recently, artist Jeff Koons gave a talk about his work and chatted with members. Private concerts by musicians such as John Legend round out the yearly program of events. At reception, members are greeted by artwork by Damien Hirst or perhaps David LaChapelle; in the gym, they work out alongside a Jean-Michel Basquiat. Included in the six floors of this Midtown townhouse are a sleek screening room and rooftop terrace bar.

Dress Code: Bespoke for men, though a monogrammed cuff and respectable denim will do. Women go with anything Chanel and carry a big Birkin.

Getting In: This hip Georgetown lounge has become the go-to scene for future and current senators seeking a dewy atmosphere. A two-year membership runs $2,000, though nonmembers can enter for a $30 fee. Tables are reserved for members—a point of difference that more than justifies the annual fee.

In Crowd: CNN’s Wolf Blitzer, Jessica Yellin, and John King; Mark Cuban; and Samantha Boardman are on the scene. Senator Mark Warner and National Geographic Society CEO John Fahey use it as a laid-back, late-night pit stop after events.

Dress Code: Dark suits and polished wingtips for men; sleek (but not revealing) dresses and pumps for women.

Getting In: This South Beach restaurant, presided over by congenial Venetian aristocrat Miky Grendene and his wife, Leticia, features a private upstairs lounge for members who pay $3,500 per year. After dinner, nonmembers watch longingly as the club set ascends the staircase.

Scene: Every night, the lounge hops with bossa nova or live music. But on Wednesdays, Miami society gets vocal with karaoke (music mogul Emilio Estefan has been known to jump up and accompany on the bongos). White wing-back chairs and a long banquette make the perfect backdrop for the tanned and toned. Venetian caviar with a bottle of Dom Pérignon is in order after a few rounds on the dance floor.

Getting In: Located behind an unmarked mahogany door, this Aspen mainstay since 1989 offers a membership for $3,000 per couple, with a $2,000 annual renewal fee. A member referral is not necessary. During December, nonmembers pay $1,500 for a weekly pass to party with moguls après-ski.

Scene: The ski hamlet is seasonal, and the club heats up when the temperature drops in the winter months. Nightlife revolves around DJ Folami, but the club really rocks on New Year’s Eve, when A-list locals let loose at the annual bash. The layout resembles a luxurious chalet and features a dining room and private nooks. (Tables 33 and 34 in the main dining room seat bigger parties and overlook the dance floor.) The Wine Room and Pow-wow Room—decorated with antler chandeliers, overstuffed leather couches, and rustic Western art—are for members only and are often the spot for an after-hours caviar buffet or a $1,000 snifter of Hennessey Eclipse Cognac.

Dress Code: Cashmere sport jackets with jeans for men and fox-fur ponchos and plenty of ice for the women.

Getting In: This flamboyant supper club, housed in a former warehouse and founded in 1993, has about 650 individual and corporate members who pay $1,000 to $5,000, along with annual dues, for lunch and dinner dining privileges.

Scene: If you are more interested in truffle salt than the price of gold, this is your scene. Think foodie nightlife, with artisanal local vodka tastings and “farmer dinners” featuring ingredients from Pacific Northwestern waters and pastures. Themed rooms with over-the-top decor like a mechanical elephant from a 1930s Paris fair can be taken over for private dinners. The ballroom is decorated with murals of Plateau Indians and giant blue velvet swags.

In Crowd: Expect to mingle with Microsoft and Starbucks execs, young gastronomes, and old Seattle money. And venture into the kitchen: Top Seattle chefs like Ethan Stowell and Philip Mihalski started here.

Dress code: As adventuresome as the setting: Men could wear dinner jackets or an ascot; women should lean toward vintage YSL or Givenchy.