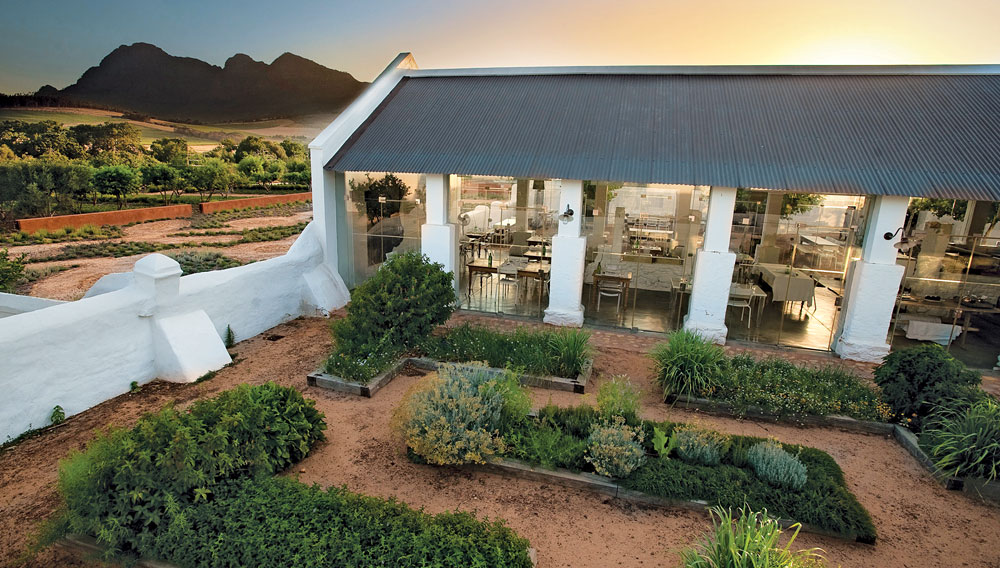 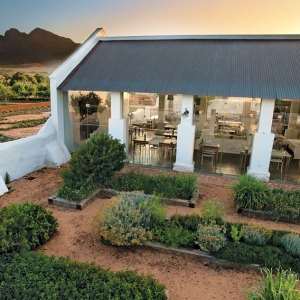 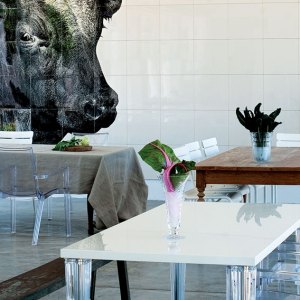 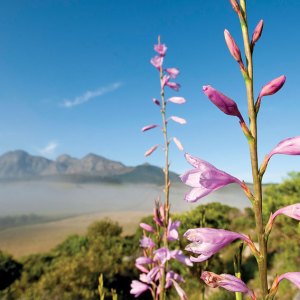 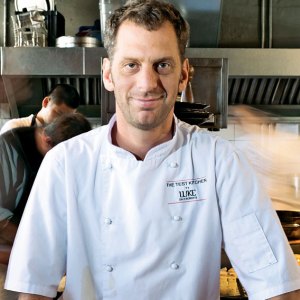 A perfectly seared medallion of springbok, tender and almost as mild as veal, holds the center of the dish, set off by an artistic slash of smoky butternut squash puree, burnished local porcini and chestnuts, and a swatch of brilliant purple cabbage cooked sous vide, as shiny as patent leather. The plate itself—forest green and etched with scattered leaves—was designed by a ceramic artist specifically for the chef. The chef in question, Luke Dale-Roberts, finishes each of his creations before your eyes, working at an open station at the center of the arty, industrial space that is the Test Kitchen in Cape Town, South Africa.

This intense creativity and localism define the spirit of Dale-Roberts and a group of young chefs in Cape Town and the nearby Franschhoek winelands. The farm-to-table movement is a relatively recent arrival to the far southern tip of the African continent, but it has been embraced with fervor—chefs are not only looking back to the farm, they are looking back to traditional South African cooking and the country’s rural traditions. “They really believe in local ingredients and in expressing the culture—East Indian, African, Dutch, and the local indigenous cuisine,” says Susan Huxter, owner of the Tasting Room, a pioneering restaurant at Le Quartier Français resort in Franschhoek. “But they are modernists, too, with personal visions of South Africa. Over the last seven or eight years, the food has become fiercely personal—and better.”

Cape Town is an inspiring place for chefs, with access to two oceans—the warm Indian Ocean to the east, the cold Atlantic to the west—and an enormous and different bounty from each to choose from. The Franschhoek and Stellenbosch wine regions, about an hour east of the city, are also cultivating purveyors of honey, cheese, olive oil, cured meats, fruits, and vegetables. The Constantia wine region is so close to Cape Town, it is practically embraced by the city. There, one will find Steenberg Vineyards, the oldest “wine farm” on the Cape, dating to 1688. A lunch at the winery’s restaurant, Catharina’s, might include sightings of an owl perched in a tree and ducks quacking their way past, as well as a generous plate of grilled Chalmar beef rib eye served with the estate’s eucalyptus-tinged Merlot.

Menus throughout the city boast about ingredients such as that deeply flavored beef; Karoo lamb, which tastes lightly of the herbs the animals graze on; and a firm-fleshed fish called snoek, freshly caught in the cold waters off Kalk Bay. There are wild oysters from Vleesbaai, ripe local tomatoes cooked down into honeyed sauces, and herbs, such as the lavender-like buchu, that only grow here. The curries and spices of Cape Malay cooking—a fusion of styles, with African roots—infuse dish after dish.

Margot Janse, chef at the Tasting Room, is Dutch but has lived and cooked in South Africa for almost 20 years. At the Tasting Room, she serves a six-course Surprise Menu that begins with a lollipop of chakalaka, the traditional spicy tomato relish, refined into a smooth sphere of tomato jelly. The next surprise is the bread: a perfect, moist cornbread baked in an empty can of pilchards (or sardines, a South African pantry staple) and served with a sweet, caramelized butter that tastes like a tangy-sweet cajeta. Why the can? Partly for the joke, Janse says, partly because cans are what she used when she first moved to South Africa and had little money, and partly because they simply produce a bread that is “more crisp, with more character.”

About 90 percent of Janse’s ingredients are local, including a wide array of herbs grown in a garden behind the restaurant, and her techniques range from molecular gastronomy to, well, baking in tin cans. Her menu announces that this is an inventive chef confidently using the full arsenal. “We want to do something modern,” Janse says. “When you start out young, you try different things and use many different ingredients. And then you go back to your roots. That is what’s happening with me now and with cooking here in general.”

Not far from Le Quartier Français, an old Cape Dutch farm with simple whitewashed structures dating to 1690 has been transformed into the

high-?design Babylonstoren resort. The property is home to vineyards, a winemaking operation, an 8-acre formal garden with more than 300 varieties of edible plants, honeybee hives, and a restaurant. Guests are encouraged to pluck their own produce—perhaps Satsuma plums or fresh waterblommetjies, a showy “water flower” that tastes like artichoke—and then tie on an apron and help prepare them. The restaurant is dedicated to a sort of pure cuisine, where foods are barely cooked, if at all, and plates are sometimes styled by color rather than flavor.

Hailing from Groendal in the Franschhoek region, South African chef Reuben Riffel grew up under oppressive apartheid rule and was labeled “Cape Colored,” but he is now one of the country’s handful of celebrity chefs. In his cookbook, Reuben Cooks Local, released last year, Riffel writes: “I’ll never forget Ma’s soutsnoek (snoek that has been heavily salted and hung to dry), hanging beside the kitchen door—partly because of the pungent smell, but mostly because we’d snap a piece off after school and have it on hot baked bread with mounds of apricot jam.”

Salty fish and sweet jam is a classic Cape Malay combination, and it is the foundation for Riffel’s double-baked snoek and cauliflower soufflé with an apricot and Dijon mustard emulsion, which is on the menu at Reuben’s, the bistro-style restaurant the chef opened in 2004 in Franschhoek. Last year, Riffel opened another Reuben’s eatery, in the One&Only Cape Town, an elegant resort at the Victoria & Alfred Waterfront. The new Reuben’s has none of the casual ambience of the first: It is dimly lit, glamorous, and contemporary—the sunken dining room is reached by glass elevator or curved staircase. On the menu are dishes such as butternut squash soup with vanilla and “medicinal herbs,” rack of lamb with sweet curry butter and candied eggplant, a refined carpaccio of springbok, and a homey chicken-and-prawn curry.

“I think we are at the beginning of it,” Riffel says about chefs emphasizing South African ingredients and preparations. “There are a lot of these people now, jumping up all over the place.”

Two years ago, the British-born Dale-Roberts was not one of them: He was making his name with an Asian-inflected French menu at La Colombe, a formal restaurant on the Constantia Uitsig wine estate in Cape Town. When he left in 2010, it was ranked number 12 on the World’s 50 Best Restaurants list. Now, in his own element (the 30-seat Test Kitchen is often referred to as an “experimental space”), he has truly come into his own. A recent tasting menu began with a trio of small bites: gougere filled with an egg yolk and fleur de sel, a pappadam as fine and crisp as a sheet of antique parchment, and a rich square of foie gras layered with porcini shortbread, truffles, dark chocolate crisp, and gold leaf.

“This is food that couldn’t be done anywhere else,” says Stephan Pyles, the celebrity chef based in Dallas, who dined at the Test Kitchen recently. “It has an exciting complexity and newness, and real delicacy. And in a very cool setting.”

It is true: More than world-class cuisine, this is cooking that expresses the overwhelming beauty and complexity of South Africa itself.

DIAMONDS IN THE SAND

of all the spectacular local ingredients one encounters in South Africa, the most surprising may be the Kalahari truffle. But indeed, the luminous red dunes of the country’s northern desert produce a sweetly funky tuber that is a cousin to the European truffle. And when it is in season—during the rainy months, roughly March through May—the truffle creates a sensation in kitchens from the Kalahari to Cape Town.

“Once you taste it, you won’t forget it,” says Theresa Smith, who for years was head chef of Tswalu Kalahari, a 250,000-acre private game reserve and lodge in South Africa that offers four-day Truffle Safaris during the season. “It’s extremely delicate—perfumey, mushroomy, and sweet like fresh soil. More like porcini mushrooms than truffles.”

Like other truffles, the Kalahari variety (Kalaharituber pfeilii) is a fungus that grows near the roots of plants—in this case, a desert melon called the tsamma. Truffle hunters look for cross-shaped cracks in the sand and, if they are fortunate, find truffles the size of potatoes a couple of inches below the surface. The region’s San bushmen fill shopping bags with the tubers, which they call !nabas, and prepare them simply: the golden skin peeled, the creamy flesh boiled and served with a little butter and salt. “They consider it a major, major delicacy,” says Smith, who also favors simple preparations. “Getting them to part with them isn’t easy.”

Lately, however, more truffles are making their way out of the desert, most often to satisfy Cape Town chefs. Reuben Riffel, the chef at Reuben’s at One&Only Cape Town, serves whole Kalahari truffles wrapped with smoky bacon and baked with cream, parmesan, and nutmeg. He also tops baked potatoes with the tubers and serves roast chicken covered with a blitz of sliced, pan-fried truffles—an extravagant quantity, but an affordable one: Last year, a kilo of Kalahari truffles was selling for just 100 rand, or about $5 a pound.