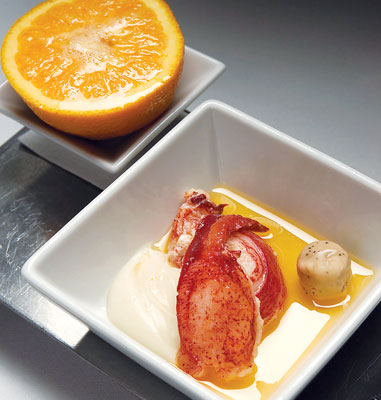 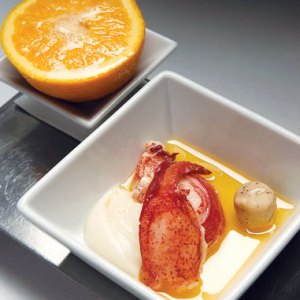 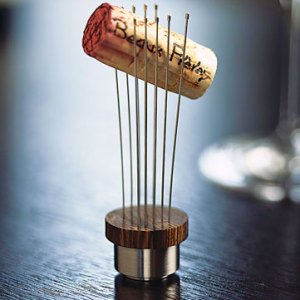 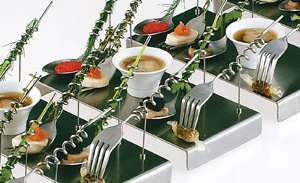 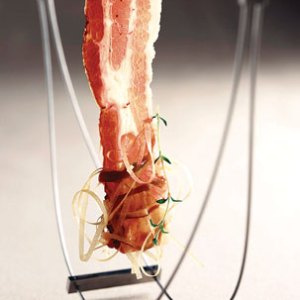 Stored among the Mischief and Mayhem Burgundies in the wine racks at Moto, chef Homaro Cantu’s restaurant in Chicago’s stockyard district, is a shiny tank of liquid nitrogen. “This is dangerous stuff. It could freeze your hand off,” says Cantu, explaining that the tank holds 442 liters, or enough to meet the restaurant’s needs for about a week. On this late August evening, Cantu will employ the liquid nitrogen while preparing a soup course: After one server places the bowl of chilled corn soup before the diner, another server, emerging from the kitchen carrying a gleaming copper pot with cool nitrogen gas spilling over its brim, will garnish the soup tableside with a ladleful of nitrogen-frozen popcorn. “I think about what is fun and what tastes good,” says the 29-year-old Cantu, who trained with Charlie Trotter for three years before opening Moto in early 2004. “If you don’t appreciate the humor, just focus on the flavor.”

Earthy, rich, and wintry, the soup is not the funniest item served this evening. Moto’s 10-course tasting menu includes an edible menu, a drinkable doughnut, and carbonated grapes that fizz audibly when pierced by a fork. But they are not the only strange dishes being served in Chicago this night. Across town, on the city’s north side near the Steppenwolf theater, Grant Achatz (pronounced Ah-kitz), a 31-year-old protégé of Trotter and Thomas Keller, is confounding and delighting diners at Alinea, the restaurant he opened last spring, with a dollop of frozen olive oil impaled on a tiny metal skewer, a single piece of butterscotch-dipped bacon served suspended from a device that resembles a trapeze, and a morsel of tempura pork that arrives attached to a leafy laurel branch. The adventurous diner can find equally unusual dishes in New York City at WD-50, where chef Wylie Dufresne (pronounced Du-frayne), who trained for more than six years with Jean-Georges Vongerichten before opening his own restaurant in 2003, has discovered a number of uses for his invention of fried mayonnaise. One favorite is his version of a BLT sandwich, which consists of pickled beef tongue, tomato molasses, romaine lettuce, and the cubes of mayo, which resemble croutons.

The type of cuisine these three chefs serve carries many names, none of which seems to capture its spirit: hypermodern, avant-garde, modern American cooking. Understandably, the chefs have no interest in codifying their work with a single label, but their approach to food is consistent with molecular gastronomy, a philosophy first expressed in 1969 by physicist Nicholas Kurti that encourages chefs to consider cooking as a series of chemical processes.

In keeping with the tenets of molecular gastronomy, Achatz, Cantu, and Dufresne use unorthodox tools, invent dishes, and explore new cooking methods, but each chef does so in a unique manner. In addition to liquid nitrogen, Cantu uses carbon dioxide, as well as centrifuges and ink-jet printers, in his kitchen. Achatz’s cooking arsenal includes homogenizers, vaporizers, and heat guns, but not liquid nitrogen: “I like to keep the kitchen in the kitchen,” he says. “The diner’s experience is richer if there’s a bit of magic, a mystique. Liquid nitrogen, to me, is too telling. It just doesn’t feel right.” Dufresne stocks his kitchen with chemicals—such as the seaweed derivative carrageenan and gellan gum—that the processed-food industry commonly uses. (A small but precise amount of gellan gum holds together Dufresne’s eggless fried mayonnaise.)

These chefs intend to do more than just feed you; they want to make you laugh, gasp, and think. Even if you find their food gimmicky, nonsensical, or simply wrong—and you would not be alone in your assessment—aspects of their cooking style are being adopted by their less radical colleagues across the country and the world. If you have eaten any dish that contains something described as “foam,” for example, you already have ventured into this culinary realm. The centrifuge, a device that can separate solids and liquids, and which Cantu uses to create the clear, spicy drink that he calls Mexican Kool-aid, also has a home in Boston’s Restaurant L.

Thomas Keller is among the several American chefs who engages in sous vide cooking, a technique in which foods are vacuum-packed in a plastic bag, submerged in water, and cooked. Dufresne uses sous vide for several dishes, and Achatz and Cantu rely on it as well. Also, Keller has invited a homogenizer into the French Laundry kitchen for an extended audition that will determine whether the powerful industrial blender wins a permanent place on his countertops; Achatz employs one at Alinea to blend ingredients thoroughly without whipping much air into the mix.

All three of these young chefs view their cuisine as performance art. “I’m crafting an experience,” says Achatz, “and food is my medium.” Like performance art, however, the food can miss the mark or prove inaccessible to some audience members. One critic deemed Achatz’s dangling bacon the weirdest dish of the year for 2005. New York Times critic William Grimes, in giving WD-50 two stars in a mostly positive June 2003 review, wrote, “Mr. Dufresne, showing a certain contempt for the pleasure principle, has taken an intellectual approach to his food, and as a result, diners are more likely to respond with respect than love. … I’d like to see a little more pleasure and a little less intellect at WD-50.”

Eating at one of these restaurants can be unnerving for all but the most intrepid diners, for certain dishes, particularly some of Achatz’s, could qualify as discomfort food, especially when they are served with the bizarre tableware that he and Cantu have created. “Making an emotionally rich experience comes down to triggering certain feelings in people,” Achatz says, citing a confrontational serving piece of his. The implement, which he calls an antenna, is a slim, 14-inch, slightly curved skewer on which he impales pieces of food that diners are expected to remove with their teeth. (No utensils are provided.) Because the seating configuration at Alinea leaves few places to hide, self-conscious diners could feel as if they are performing for their tablemates, the serving staff, and every other patron in the room.

The notion that his customers might experience some unease while eating his food does not seem to concern the chef. “You eat several times a day, every day of your life. I want to show people something different,” Achatz says. “Of all the bites that you remember in your life, I’ll bet that you remember that bite from the antenna. It freezes a moment in time, and that’s satisfying and gratifying for me.” Surprisingly for a chef, Achatz is untroubled if his patrons can recall only the antenna, not what they ate from it. “In one course, it’s OK,” he says. “You’re in the chair for three hours. How can I give you the best three hours I can? In some cases, the food might have to play second fiddle to some degree.”

Dufresne also aims to feed your mind as much as your belly. “I want people to leave saying, ‘I never ate anything like this.’ I want to make them think a little,” he says. “This is a way to eat. It doesn’t have to be about hunger. There’s room in the world for a full spectrum of experiences.”

A meal at any one of these chefs’ restaurants indeed will provide a full spectrum of experiences, from the confounding to the charming to the underwhelming to the disturbing to the transcendent. Alinea’s tempura pork—which arrives attached to a laurel branch, strongly resembles a root vegetable, and is eaten by grasping the branch and lowering the tempura into your mouth—is an immensely satisfying single bite that ends too quickly.

Achatz’s bacon course does look ridiculous, with curly, almost transparently thin shavings of Granny Smith apple stuck to its butterscotch coating as it hangs from a length of wire. But the combination of pork, apple, and butterscotch deftly unites salty, fruity, and sweet flavors.

The 10-course tasting menu at Moto includes at least one miss: a dish of chorizo, manchego cheese, and little Chiclet-size pillows of what the server assures is “FDA-approved edible Styrofoam,” glued together with dollops of caper mayonnaise. The combination tastes like olive oil–sodden bits of rice cake sandwiched between slabs of meat- and cheese-flavored fat.

But the aforementioned drinkable doughnut, titled doughnut soup, is a revelation designed to leave you giddy. This treat, which appears late in the meal, is relatively simple to prepare, by Cantu’s standards; he makes the doughnuts on site, purees them with cream, boils the liquid, strains it, and then serves it. The white liquid arrives in a tall, thin glass, and true to its name, it tastes exactly like a fresh glazed doughnut. The sensation of your brain trying to reconcile what your taste buds are reporting with what you know about doughnuts—that you do not drink them—is as delicious as the drink itself. Cantu says the item receives more positive reaction than anything else on his menu.

Given the popularity of doughnuts, such a response is not a surprise. As Achatz notes, regardless of a dish’s preparation or presentation, it is judged ultimately on its taste. “It’s not about how you get there,” he says. “Science and food have mixed since there was cooking, but it’s a means to an end. I love to innovate, but if you focus so much on it, you put the cart before the horse. What does the food taste like? How you get there is less important.”