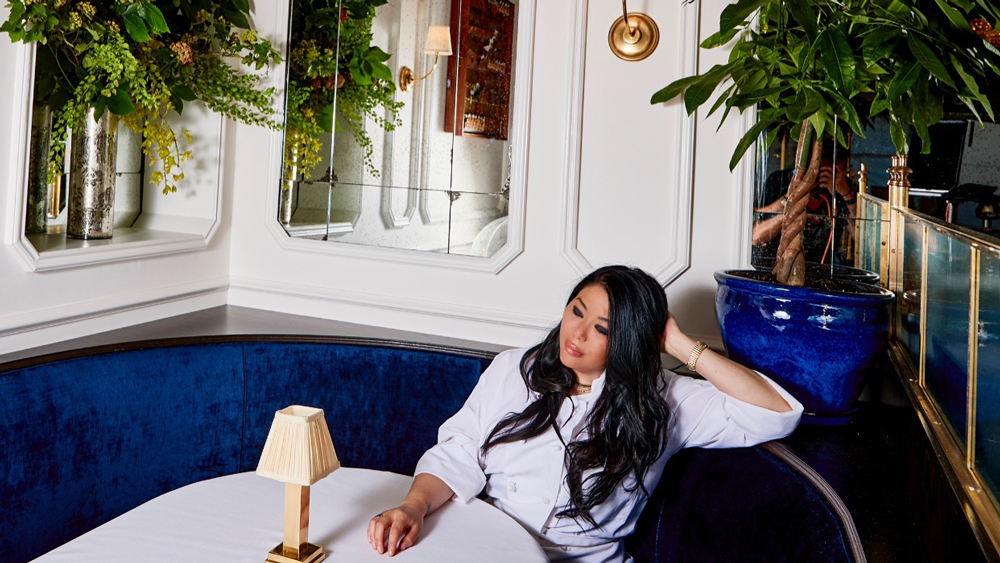 Angie Mar shuttered The Beatrice Inn after the last service of the last day of 2020, her iconic New York restaurant lost to failed pandemic-era lease negotiations. And when the chef found a new landlord and signed on an empty restaurant space right next door, she fully intended for her new project to honor the hedonistic spirit and history of The Beatrice.

But with the opening of Les Trois Chevaux this week, Mar has permanently 86ed neon lights, perma-party vibes, pork shoulder and smoked Manhattans. There are no steaks on the menu, either. “They’re not going to know what hit ‘em,” she says.

Last November, the morning The New York Times published news of the restaurant’s imminent closing, Mar received a note from friend, mentor and French culinary god Jacques Pepin. “Jacques is always so supportive, but he very rarely gives advice-advice, like real advice,” says Mar. Pepin told her not to open The Beatrice Inn next door. She needed to believe in herself enough to have a restaurant that bore her own name. She had to move forward.

“I realized I could move next door and could cook the food that I’ve been cooking for eight years, or I could really lead the next wave of creativity,” says Mar, who’s food at Les Trois Chevaux is old-school French filtered through the lens of family and her downtown aesthetic.

Mar’s last name means horse in Chinese, and, as kids, she and her two brothers had a collective nickname of “the three horses,” which she translated to French to give the restaurant its name. “There are very much two sides to me. I’m an old French man just trapped in this body. Then there’s my cultural heritage, which is Chinese,” she says.

As Mar looked around at all that was lost last year and felt energy slowly returning to the city, she wanted to create a space that would recall the great French restaurants of New York’s past—Le Côte Basque, Lutèce, Le Cirque, La Grenouille—and the high-heeled, glamorous dining she remembers from 20 years ago, before athleisure invaded restaurants.

Les Trois Chevaux is reservation only, even at the bar, with a three-course, pre-fixe menu. (Though Mar says it’s more like five to seven courses, depending how ambitious she is that day.) Men must wear jackets or borrow from a collection of vintage Yves Saint Laurent; Christian Siriano outfitted the restaurant’s servers, bartenders and hostesses. A painting by Pepin hangs in the light-filled dining room, and it’s part of a collection that includes Banksy and a Picasso etching.

Mar also wanted the space to represent New York—fellow creatives who drew her to the city in the first place and “lifelong New Yorkers, people who didn’t leave the city to go hide in the Hamptons during this past year,” she says.

Working with BWArchitects, Mar tapped local stone and wood workers, as well craftsmen like Marcello Bavaro, a Brooklyn artisan who restored the Mona Lisa’s frame. They installed an over-the-top chandelier salvaged from the Waldorf Astoria, and Raúl Àvila, the event designer for the Met Gala, is in charge of weekly floral arrangements. There are deeply personal touches, too. The blue velvet banquette seats are the color of her dad’s favorite sweatshirt, and antique horse lamps and Chinese vases nod to pieces once displayed in her family’s home.

“This is the first chance that I’ve had in my career to do something from a completely blank canvas, the first time something feels like it is irrevocably mine,” Mar says.

It’s a strange sentiment to hear from Mar, a chef-as-force-of-nature who’s food and style have never conformed to industry trends. But Mar says she was hand-cuffed by The Beatrice, its legacy and her own success. Now, “I feel so liberated,” she says.

Still, Beatrice fans will quickly recognize throughlines in Mar’s cooking: decadence, a little mischief, fire, storytelling, family, Francophilia. There’s a carving station dedicated to roast pheasant and an ode-to-André-Soltner croissant laced with black and white truffles and served with an ounce of golden osetra caviar. She’s serving frenched frog legs two ways: one confited in duck fat and the other poached in Champagne beurre blanc. For her foie gras à la Bordelaise, Mar baked whole foie lobes with peeled Muscadet grapes that have been macerated in Cognac. Servers will roll up a cart and sauce the entrée tableside. “That’s my steak,” Mar says.

For the menu, Mar researched historical dishes and molded them to her vision of New York dining. Her poitrine de pigeon en croute de cendre draws from French game and hunting traditions. Rather than wrapping pigeon breast in grape leaves and baking it en cocotte, a dish French nobility might have experienced, Mar’s pigeon is encased in cherry blossom leaves, buried in ash and baked. It’s broken apart tableside and served with wild mushrooms and Armagnac sauce. “When it comes to the table, you can smell the sweetness of the cherry blossoms, of the sakura,” says Mar. “There’s something very familiar about that to me. It reminds me of going to my grandfather’s house in Taipei. It reminds me of my father’s backyard.”

Mar’s ormeau au feu, or abalone on fire, is one of her more elemental dishes, inspired by the abalone she grew up eating on the West Coast, as well as long-ago Norman tradition that involved collecting planks from shipwrecks. Mollusks attached themselves to the boards and resourceful cooks buried the wood in dry pine needles, doused them with alcohol and lit it all on fire to roast the bivalves. (The cooking method still is practiced in France, no shipwrecks required.) Mar roasts abalone and Chartreuse-brushed squid directly over fire and finishes the plate with a leek and vermouth créme meant to evoke the foam that accumulates as waves crash to the shore.

“When you see and eat the food, it’s more restrained than I think a lot of people would expect for me,” says Mar.

Rounding out the experience is a wine list heavy on Burgundy and Champagne. Bar director Antanas Samkas has also assembled a collection of rare Chartreuse, Armagnac and eau de vie; and his cocktail list features eight martinis.

Mar will make three to five desserts a night, small bites so diners don’t have to choose just one. Expect Armagnac madeleines and towers of croquembouche. “I think the last person to do croquembouche in a really impactful way was Jacques Torres when he was at Le Cirque,” says Mar. “Serving croquembouche is fun. I still want people to eat with their hands. You know, I want to sit under a chandelier and eat cream puffs with my hands.”