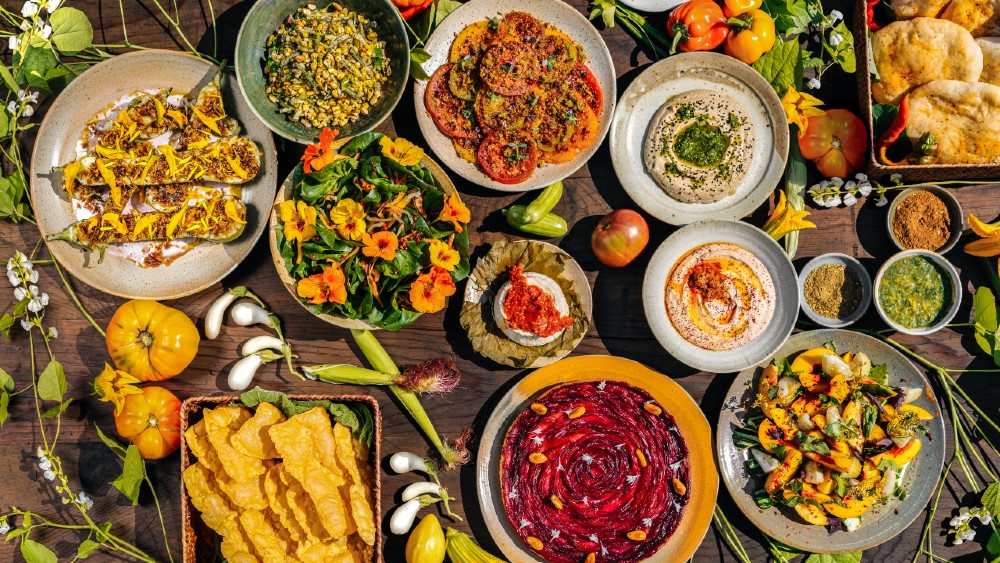 For those who are conscientious about their dining choices, what you eat could be considered virtuous, even saintly.

That’s the idea behind the vegan restaurant Little Saint and its accompanying 10,000-square-foot mixed-use space, which opened on Earth Day, April 22, in Healdsburg, Calif. The “plant-based” restaurant is a new project from Kyle and Katina Connaughton, the chefs behind three-Michelin-starred SingleThread, also in Healdsburg.

While the chefs are not vegan themselves, they make vegan dishes often—10 percent of diners at SingleThread request meat- or dairy-free meals. And Little Saint, they say, is another way to show off the produce they grow on their 24-acre SingleThread Farm and their new, nearby five-acre Little Saint Farm, plus what is produced in the larger agricultural community of Northern California.

“You come into SingleThread and you have a 10-course menu at a three-Michelin-starred restaurant, and the produce and the way we’re treating it is the same that you’re going to have at Little Saint,” Kyle said. “The ingredients are the same, the preparation and techniques are very similar, but it’s a different expression of creativity, in a casual restaurant.

“This is really already part of our DNA to do this.”

The restaurant occupies the former home of the beloved Shed.  Little Saint

Noticeably absent from the offerings, though, are animals.

“We’re not necessarily trying to convert people to become vegans, but we’re really trying to say, this way of eating can be really enjoyable,” Kyle said. “We should all be thinking about reducing our consumption of animal proteins for a number of reasons, whether that’s for our health or the environment. We’re not lecturing or preaching about it. We’re just making something delicious and hoping that people appreciate it and that they will continue to think more about the choices in their lives.”

Some of the tasty desserts  Emma K. Morris

To Kyle, limiting themselves and chef de cuisine Bryan Oliver to only using vegetables and grains has resulted in quite a creative feat. Parameters have equaled freedom. Instead of relying on meat, seafood and cheese for flavors and textures, they now celebrate vegetables and grains for exactly what they are.

The chefs are using a lot of preservation techniques like fermenting and brining and drying, which helps extend their farms’ growing seasons. They’re also employing multistage cooking processes. For example, something may be simmered and then smoked and then dehydrated and then rehydrated in a flavorful liquid.

“You can cook a steak or steam a lobster and rely on them to stand on their own, if you have quality ingredients and good technique,” Kyle said. “But with vegetables, we have to do a little bit more work for them to be valued in the same way. We can enjoy the produce on its own, just like you can enjoy a steak with salt and pepper on it and nothing else, but you have to go a little bit further with the vegetables to really develop flavors.

“Vegetables actually allow for more creativity, because there’s only so many things you can do with a steak before you’re actually starting to ruin it by overmanipulating it.”

Desserts include Koshihikari rice pudding with amaro-soaked boba and citrus confit, and the cocktails—from Matthew Seigel, and also bursting with produce—include drinks like the Francis Fizz, made with pisco, Aperol, purple carrots, aquafaba and Amaretto.

“The food is so gorgeous and colorful and full of textures,” Katina said. “It really is just a stunning show of what is coming from the field. It’s nutrient-dense and invigorating.”

Katina oversees the agricultural side of the business, with an emphasis on what they consider responsible land practices for the long term.

“We take our jobs as stewards of the land very responsibly,” she said. “We don’t just consider the duration of time that we’re going to be spending on this land; we consider it for many, many generations to come. We really try to grow healthy soil, first and foremost, to be able to grow healthy produce. So, we work the land by hand. We grow everything in full accord with nature, very slowly and gently.”

A kohlrabi tartine with capers and three-cornered onions  Little Saint

Little Saint caters to nearby residents, who pop in quick and often, and vacationers, who schedule time for leisurely, elaborate meals while they’re in the area. There are à la carte options and sharable platters; some dishes’ portions are even customizable by group size.

The community aspect is important for the Connaughtons. They want Little Saint to be just as valuable to locals as visitors to Sonoma Wine Country, much like the building’s previous occupant, Shed, a James Beard Award-winning restaurant and gathering space that closed in 2018.

“We loved that place,” Kyle said. “They left a really big void in our community and certainly in our own lives because we were there all the time.”

In 2020, the Ubben family, in partnership with the nonprofit Saint Joseph’s Art Foundation, purchased the property and recruited the Connaughtons to collaborate on its reopening. Much of the ethos of Shed lives on. The building is only slightly modified and community events are still a primary focus of the space. The operators envision hosting weekly wine tastings, book signings, live music, film screenings, visiting chefs, panel discussions about sustainability and more.

“We’re very happy to carry on that part of the mission because it was a really beautiful vision,” Kyle said.

Designer Ken Fulk of the arts foundation spearheaded the open-plan interior’s refresh, which included getting local artisans involved in building the wooden tabletops, handmaking tiles and sewing denim patchwork upholstery for the seating.

Though Little Saint was first announced in 2020, the buzzed-about project was delayed due to the pandemic and supply chain issues. Since then, though, the fine dining conversation has shifted, with meat- and dairy-free menus taking centerstage at high-profile restaurants—most notably, Daniel Humm’s Eleven Madison Park—and garnering mixed reviews.

“The greatest impact that Eleven Madison Park has had, and we’re trying to have at Little Saint, which is much more casual, is we’re trying to help shift the diners’ mentality,” Kyle said. “Historically, the value of the plate has been on the animal protein, and the vegetables have played a supporting role. In the fine-dining space, the value perception has been on luxury ingredients in that category—lobster and sea urchins and Wagyu beef. We want diners to appreciate the value of turnips and cabbage, too.”

Diners control the narrative, Katina says, and once they make that mental shift, professional critics will pay attention and follow suit. (Michelin and 50 Best do not recognize many vegan or even vegetarian destinations.)

“This is a conversation that just started, but it’s really starting to gain momentum,” Katina said. “We’re seeing a strong movement coming.”

With more and more diners at SingleThread requesting this type of meal, will the Connaughtons ever remove meat and dairy from that kitchen?

“No, it’s really never the intent to go vegan at SingleThread,” Kyle said. “We’ll continue to have more and more vegan guests, but we feel very comfortable with where we are. We have always been driven by our farm and by our produce. So, we will always be a predominantly plant-based restaurant and help shift the dining community’s perspective into placing more value on that aspect of the meal. But people are not going to stop consuming seafood and meat. So, in that area, we are trying to influence, to support people with better practices from a sustainability and humane standpoint.

“People like Daniel Humm are taking critical risks in order to move things forward. It’s a risk that we think is worth taking. I don’t think it’s the boldest risk in the world, but we feel that we have a platform and a responsibility to use that platform to help try to move this forward.”