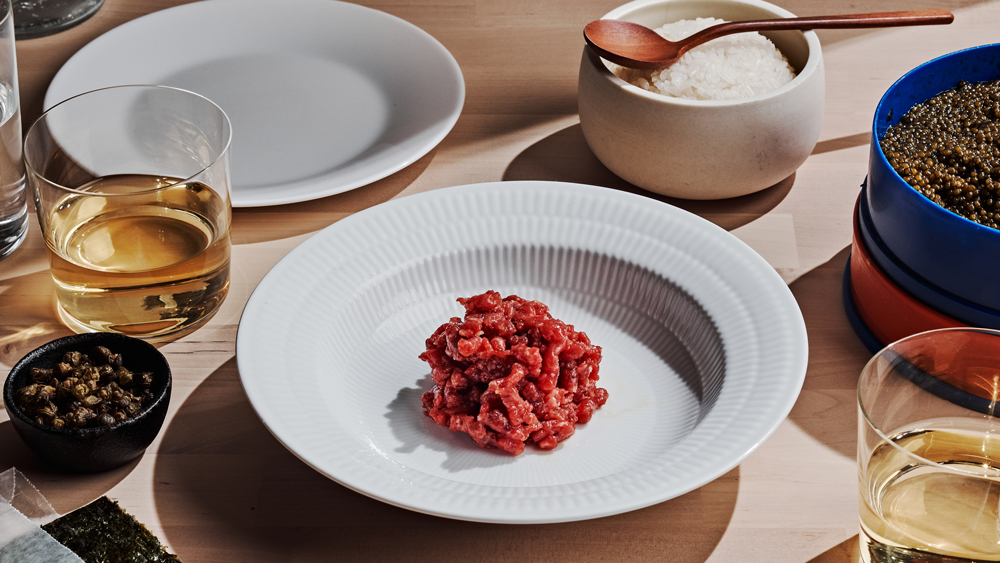 I didn’t know quite what to expect when I arrived for lunch at Locust, chef Trevor Moran’s Nashville restaurant and his first full-time project since departing Catbird Seat in 2015. Locust’s website nor Instagram offers up a menu. An early review dubbed Locust a “dumpling den,” and another praised the simplicity of the concept. A local bartender told me that I had to order the beef tartare.

The day of my visit, ABBA played the entire service, but more often it’s punk or death metal. “‘Rum Sodomy & the Lash’ gets played four times a day,” says Moran of The Pogues’ 1985 album. “It’s pretty rough, but it gets the energy up in the dining room.”

The thing is, Moran isn’t quite sure what Locust is either … yet.

“I decided that we would just sort of let it become whatever it wants it to be,” says the Irish chef who left Noma for Nashville eight years ago.

After Catbird Seat, Moran took a four-year break from restaurants. He spent the time helping raise his young daughter and cooking at international pop-ups and high-end collaborations. “I kept my finger on it, but didn’t have anything to call my own,” says Moran. “It was cool, though, because I was only cooking for pleasure. That really informed what I wanted for Locust without even realizing it.”

He knew he wanted flexibility and something small. Open for lunch and dinner Friday, Saturday, and Sunday only, Locust clocks in at just 36 seats. Every “yes, chef” reverberates through the restaurant, and cooks double as servers and food runners. Partly because of space limitations and partly an aesthetic choice, diners have a full view of industrial refrigerators and glass-front beverage coolers. You can see and hear Moran mixing orders of tartare, his spoons clanking against the bowl. “I really wanted it to feel like someone’s cool home and have everyone feel like they’re being cooked for,” he says.

Moran designed the open kitchen and island, and his wife Savannah selected materials, including cabinets from Delta Millworks, the company responsible for the woodwork at the French Laundry and Sean Brock’s Audrey. Even with backing from Strategic Hospitality, the group that owns Catbird Seat, Moran says they ran through the opening budget, leading to a “crappy industrial floor” (it’s concrete and hardly offensive) and “janky old plates” they bought for 75 cents apiece (though the chef reports they’ve since bought four plates and three bowls from Royal Copenhagen).

Locust, in other words, is still becoming.

Broadly, Moran says he’s focused on classical cooking, seafood, precise sauce work and hospitality where everyone—couples on a first date and his chef peers—get “treated like a Michelin inspector.” Beyond that, there’s no pinning Locust down. “The techniques come from everywhere, and they were learned over 20 years of cooking,” says Moran. “I don’t know what to call the style, except I’m cooking for Earth people. It’s food from Earth.”

Moran learned to make dumplings at home and spent many a pandemic hour working on his technique. Now, the Locust team produces 2,000 a week, skins and all. They arrive at the table in a bamboo steamer fat and translucent, teasing the juicy pork-onion-garlic-ginger filling inside. There’s nothing atypical about the dish, except for the care the dumplings receive. “If you’re going to do simple things, you have to constantly be present,” says Moran, who blends the meat and fat by hand and constantly adjusts ratios and seasoning. “I think that’s why people like them so much. Plus, the skins are paper-then, and when you eat them, they kind of disappear.”

In his early days as a cook at Noma, Moran tried the restaurant’s beef tartare with tarragon and sorrel. “I remember eating it and being like, ‘This is definitely the best thing I’ve ever eaten,” he says.

I had a similar and revelatory experience at Locust. I’ve grown weary of tartare. I feel like I’ve had them all: classic, over-dressed, over-wrought and, rarely, just right. Moran dresses his raw beef with smoked mayonnaise (made with smoked and pickled eggs from the restaurant’s 30-chicken flock) and serves it with freeze-dried capers, warm rice, and nori. And because we’re living in caviar times, you can opt for a “too much caviar” add on. As a solo diner I ate it all, making little hand-rolls with my ideal ratio of beef and crunch and salt and roe. (If you have to share with more than one person, order two.)

The team works hard to source obscure and specialty seafood, mostly from the States, and then they treat it gently. The “tuna ham crisp” is an ambiguous-sounding sleeper hit for which cooks layer sheets of smoked and raw tuna onto carta di musica with a punch of horseradish. Market shellfish might include West Coast oysters, East Coast scallops, razor clams, or gooseneck barnacles. They recently brought in the country’s only Pacific flounder harvested with the Japanese ikejime method.

Don’t be surprised if you hear some death metal playing in the dining room.  Camille Tambunting

The sauce work comes into play in Locust’s fish of the day, perhaps on a plate of fried curried halibut or roasted Dover sole with seaweed-crab-txakoli-butter sauce. Grilled mackerel has appeared with a mackerel roe mayonnaise.

If you’re tempted, as I was, to skip the kakigori, don’t. On the day of my visit, it was shaped like a loaf of bread (the size of one too), filled with passion fruit curd and topped with a marshmallow fluff bouffant and salted caramel. Though intimidating after all the tartare, it was refreshing and just-sweet, dissolving by the spoonful like new snow.

By now, the kakigori, dumplings and tartare feel like forever staples; they have a fan base. But Moran assures me as soon as his team gets bored with a dish, they’ll kick it off the menu.

“In this format, we can play and constantly evolve without having to do kitchen rebuilds or move spaces. I definitely want to get closer to what I first started to cook, more Irish and British,” he says. “The older you get, the more you love the idea of a perfectly cooked piece of fish with a perfect sauce. It actually becomes more exciting. I can’t stop thinking about it. That’s kind of where we want to go.”

Click here to see all the photos of Locust.