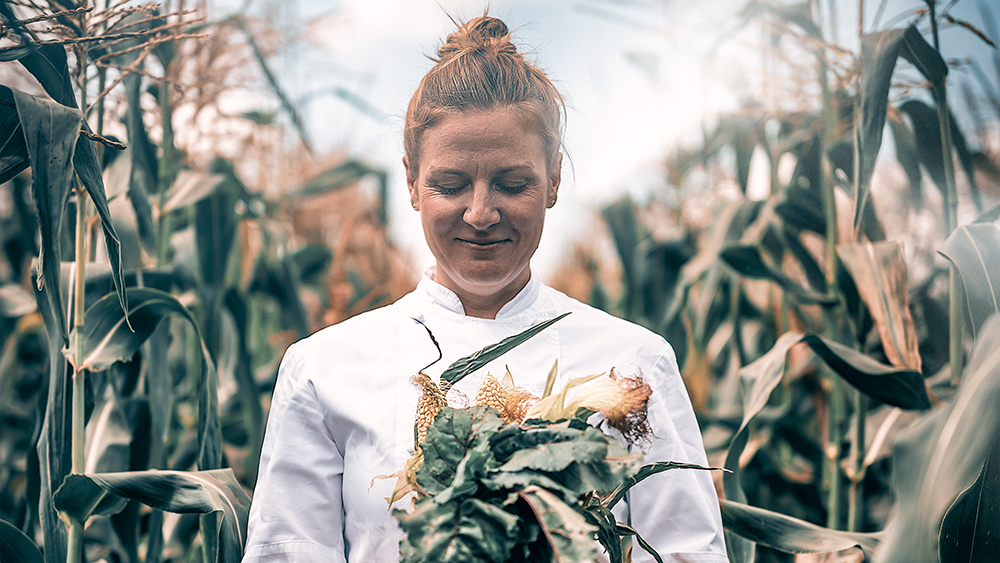 The word “apricity,” a 17th-century term that once denoted the warmth of the winter sun, is now obsolete, grouped under “rare wintry words” in Merriam-Webster’s online dictionary. That means, should you suddenly hear it tossed around in conversation, it will most likely be in reference to chef Chantelle Nicholson’s new London restaurant, which she named for that same poetic notion.

For Nicholson, Apricity—both the word and her restaurant, which opened this spring in the city’s upscale Mayfair neighborhood—embodies regeneration and rejuvenation, concepts that apply not just to her low-waste, hyper-seasonal menu but also to the well-being of her staff. The restaurant has a strict 11 pm curfew, so that workers can safely take public transportation home, is closed two days a week—an anomaly in the high-stakes, low-margin world of professional kitchens—and includes a service charge factored into menu prices to help generate a higher living wage for employees.

“When you start from scratch, you can carve out a positive way forward and look at how we can change things,” Nicholson says of her approach.

A “positive way forward” is also an apt description of Nicholson’s menu, which is on-brand: After earning a reputation as one of the city’s most influential champions of sustainable dining—as chef at Tredwells, in Covent Garden, she earned the now-shuttered restaurant a Michelin Green Star in 2021—Nicholson allowed herself to think big for her first solo project, which means that everything at Apricity has a backstory. A simple green salad is the product of a dozen small decisions: The lettuces are harvested one day before, from a local vertical farm, and delivered via electric vehicle; the wild garlic flowers are foraged; the sweet, tangy dehydrated tomatoes originate from the Isle of Wight; and the rapeseed oil in the dressing is likewise British, as is the miso paste, made by an artisan in London.

“You might think it’s just a salad, but when you eat it all together, with all the textures and flavors, it takes people by surprise,” Nicholson says.

To meet her vision for creating a circular economy, design firm Object Space Place focused on reusing or recycling as much as possible from the former Duke Street shop, bringing in minimal new items and considering the end-of-life cycle in the design elements. To wit: All chairs (made from recycled Coca-Cola bottles) and tables in the eatery were salvaged from a nearby restaurant after it closed. The original staircase, which had to be torn down, was reused to create a feature wall, while the skirting boards were repurposed as bar fronts. “I wanted to see how far we could push the boat out and get things to be as forward-thinking and sustainable as possible,” Nicholson explains.

While the menu is “veg-forward,” as Nicholson puts it, it isn’t meatless, a trend among many haute chefs who have made headlines for pledging to create planet-friendly fine-dining experiences. (Chef Daniel Humm caused a stir last year when he eliminated meat at his New York restaurant Eleven Madison Park, while Dominique Crenn removed meat from the menus at her San Francisco restaurants, including Atelier Crenn, in 2019.)

While she’s against factory-farmed meat, Nicholson—who grew up in New Zealand, where sheep and beef farming are backbones of the economy—never considered going meat-free. Instead, she believes in the principles of regenerative agriculture, which focuses on biodiversity and rehabilitation of soil health. Within this model, the manure produced by livestock plays an important role:

At Apricity, regeneratively farmed, zero-waste meat may show up as Devon pork belly served with kale, mutton lamb and spiced chickpeas, caramelized whey and kimchi or braised ox tongue with vegetables. Meat or no meat, chef Nicholson is here to transform.